Spaced Season 1, Episode 3 "Art": The Inspiration For Shaun Of The Dead 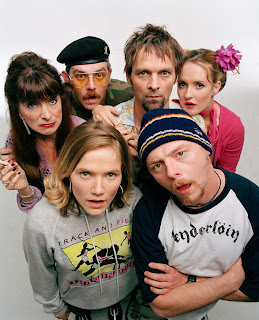 I love Shaun Of The Dead. That's no secret. It's the perfect love letter to the Romero Living Dead film. The energy, the snappy yet unpretentious dialogue, the subtle (and not-so-subtle) references to other zombie movies -- all that provided an intoxicating mix for me. The main crew of actors Simon Pegg and Nick Frost, and director Edgar Wright shot up the charts in my eyes.

I also love the British sitcom or "Britcom," if you will. I grew up on a steady diet of "Monty Python's Flying Circus" in high school, "The Young Ones" in college, and "Red Dwarf" and "Coupling" in recent years. When I heard the buzz around the connection of Shaun Of The Dead and a two-season cult classic called "Spaced," I had to check it out.

Thank you, Netflix. Then thank you, Amazon, for providing me with the most-viewed DVD set in my collection. 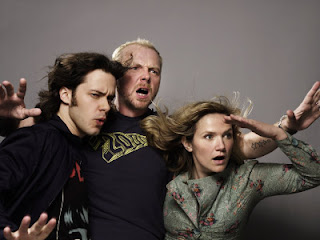 "Spaced" is the creation of Pegg, Wright, and Jessica Stevenson (née Hynes). You might remember Stevenson as Shaun's friend he occasionally runs into during the zombie apocalypse ("Good luck!"). The show itself is about two people who meet and pretend to be a couple in order to rent a sweet apartment, and the friendships they form with the other tenants and landlord. The episodes are fast-paced, snappy, and chock full of pop culture references that would test the trivia knowledge of the most hardened expert. There's a shot-for-shot nod to Pulp Fiction and the scene where Vincent Vega meets his end. The hilarious reference to The Sixth Sense even includes Olivia Williams, who played Bruce Willis' wife. So many references, you can actually choose as subtitles the "Homage-O-Meter," which literally tells you each reference on-screen. Beautiful.

Just as stated on the DVD commentary of Shaun of the Dead, the inspiration for the movie came from the third episode of the first season. The episode, "Art," begins with Tim Bisley (Pegg) dispatching classic slow-moving zombies while making Bruce Campbell-esque quips like "Come get some" or "Heads up." It is, of course, a wonderfully bloody mess. When he turns his gun on the final zombie, the truth is revealed: he's actually been playing "Resident Evil 2" all night because of some speed he got from some aggressively friendly Scots he'd been playing pool with at the pub.

The seed had been planted. A few years later, Shaun of the Dead would be born.

You can watch the clip on YouTube (sorry, can't embed it here).

The zombie references don't end there. During the course of the episode, fellow tenant and artist Brian Topp (Mark Heap) is invited to a performance by his former collaborator Vulva (a non-gender-specific straight male performance artist played deliciously by "Little Britain" co-star David Walliams). For fun, Daisy (Stevenson) pulls the still-wired Tim along for the viewing, despite Brian's protests. He's still reeling from Vulva's rejection and intends on standing up to him...her...er...you know.

After the marathon performance, Brian confronts Vulva with little success as Tim enjoys the free drinks and Twiglets. The speed, the lack of sleep, the booze, and the fact that Twiglets "make [him] violent" causes Tim to hallucinate there are zombies everywhere. He sees Vulva moving in on Brian and thinks it's a zombie ready to bite his friend, so he punches out the arrogant artist before gathering his friends, nervously reciting some lines from "Resident Evil 2," and scurrying out of the place. 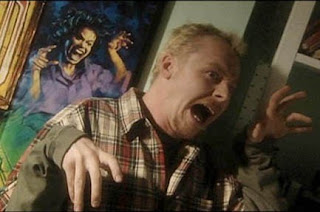 It's very clear that everyone involved with "Spaced" is a fan of horror films. Not only are there references spiced all throughout the two seasons, but the camera work often employs techniques one finds in a horror or suspense film. The soundtrack is full of clips and themes recognizable to the horror fan. The episode I've written about here includes cues from "Resident Evil 2." The penultimate episode features an homage to The Omen, complete with music.

Maybe the show itself can't be classified as horror. It's comedy, pure and simple. But there are so many influences derived from horror, I see it as a shame not to include it in my exploration of the genre. 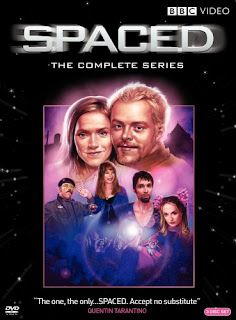 If you have Netflix, check it out right away. Such an enjoyable series full of fanboy/fangirl moments, and it's such a well-written, well-acted, and well-directed set of episodes. Seriously, get your hands on this series, sit back, and try to pick out all the references while you laugh your arse off.

Until next time, fellow shelter citizens, remember that the undead seem to have fully functioning ears. Refrain from shouting if possible.
Posted by Dod at 10:32 PM