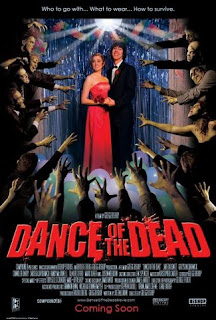 I remember prom.  It was the 80's, so those proms you see in "homage movies"?  Yeah, that wasn't my school.  That's not to say our prom wasn't bad.  It was fun for the most part.  I dressed in a white tux (that came with a swank cane), took a girl named Julie to dinner, then prom.  Nothing crazy, nothing wild.  Nobody threw up on the dance floor, nobody spiked the punch, and nobody was a reanimated corpse hungering for human flesh. 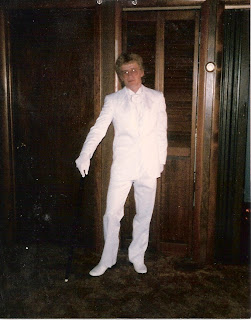 Yes, that is me.  Now BASK in the glory that was my nerd-before-nerd-was-cool 80's self.  At least the cane was swank.

That's essentially what happens in Ghost House Underground's Dance of the Dead, written by Joe Ballarini and directed by Gregg Bishop.  You've got your teen hormones, rivalries, drama, and a horde of undead firing out of the cemetery like rocks from a catapult.  It's a little movie with a modest budget and no "big-name" stars, but that doesn't take away from it in the slightest.  The cast more than holds their own in creating what is a very good zombie movie with healthy doses of comedy, adventure, and romance to round out the flavor.

In a cemetery near a nuclear power plant, the poor caretaker is apparently the only one that knows the radiation is causing the buried dead to come back to life.  He calmly goes about his day, cleaning headstones, trimming hedges, and making sure the dead stay in their coffins.  Meanwhile in the town of Cooas, the teen population is readying for the prom.  The characters go through an assortment of typical teen pre-prom excitement.  Troublemaker Jimmy (Jared Kusnitz) thinks everything is a joke which causes his sweet, prom committee girlfriend Lindsey (Greyson Chadwick) to dump him in favor of smarmy popular guy Mitch (Jeff Adelman).  Jimmy's buddy Stephen (Chandler Darby) aches over asking out cute cheerleader Gwen (Carissa Capobianco), whose date just canceled on her.  Gwen, although very sweet, has eyes for the high school rock star Nash (Blair Redford).  Thrown in the mix, but playing important parts, are adrenaline junkie/bully Kyle (Justin Welborn of The Signal) and the Sci-Fi club, led by John Heder lookalike Jules (Randy McDowell).  All the characters are in place thanks to some nudge-nudge-wink-wink 80's-style montage action and when the Sci-Fi Club heads to the cemetery for some exploring, the action begins.

The dead come to life and literally explode out of their coffins.  Interestingly, the speed of the undead seems to depend on how long they've been buried.  More ragged zombies move slowly, while "fresher" ones zip along with reckless abandon.  Not all of the Sci-Fi clubs make it, and Mitch - who just tried getting a little too forward with Lindsey - loses his head over the whole zombie-rising situation.  They make it to, of all places, a funeral home and hole up there.  While running from the undead, Jimmy meets up with Kyle - who has a gun - and Gwen, who is oblivious to the zombies as she's out for a run with her iPod.  They escape into the sewers after hearing from Lindsey and make their way to the funeral home.

After a battle in the home in which Kyle is killed, Gwen makes a daring run to retrieve the hearse and the gang escapes.  Running into the wild-eyed, militaristic gym teacher, Coach Keel (Mark Oliver), they load up on weapons and plan to rescue whoever is left at the prom.  They pick up Nash and his band along the way, gaining some important intel:  the zombies are affected by sound waves.  They stop and sway to music which provides a shade of hope to the little group of living rebels. 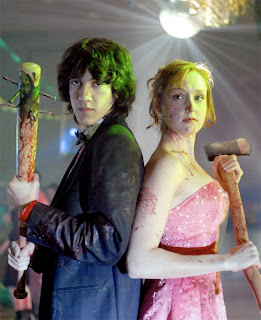 The school is overrun by the time they get there, so Keel goes through with a plan to blow up the school with all the undead in it.  The Sci-Fi Club and Gwen embark on a rescue mission while Jimmy and Lindsey undertake the mission of retrieving the explosives trigger that the Coach dropped in a bowl of potato chips.  Not everything goes as planned, and not everyone makes it out alive, but the school is destroyed while the dialogue afterwards sets up the possibility of a sequel.

Dance of the Dead really is a fun little movie.  It might not be the greatest zombie movie ever made, but it ranks pretty high on my own list.  The actors are having a blast and there's a definite nod to 80's-style teen comedies running through it.  Each character has a distinct personality and interacts well with the other characters in the story.  No one really clunks through a scene with a counterpart.  The movie moves along quickly and sharply, with the main emphasis being on the fun.  Yes, friends die and yes, the town is overrun by flesh-eating zombies, but as the viewer, relatively safe from the zombie plague in his or her home, is enjoying the ride.  There are some great scenes of comedy, especially when Kyle interacts with the "geeks" or dispatches zombies in his own Jackass-inspired way.  There are some heartfelt moments, such as when Jimmy comes into his own and the final fate of Gwen and Stephen (although you could include laughs and gore with their final scene, too).  Whether or not Dance of the Dead is your bag, take a look and judge for yourself.  Personally, I did have fun both times I've seen it, and I'd see it again.

Next time you have a rough night out or lament having a "lame" prom when you were younger, just be glad there wasn't a zombie apocalypse in progress.

Now go on, enjoy the trailer: