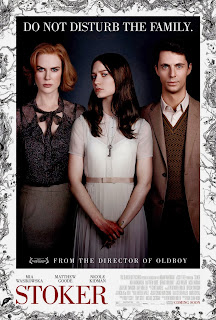 OK, this will be the first blog entry that I've written that will take time over two years to write.  Well, not really.  I started it on New Year's Eve, 2013, and hopefully will finish it in 2014.  The way I've been blogging lately, I can't seem to guarantee that.

Nonetheless, let me tell you a little about what I thought of 2013's Stoker.  The movie, written by Wentworth Miller (one of the stars of TV's Prison Break) and directed by Park Chan-Wook (the original cult film Oldboy), pays tribute to the great Alfred Hitchcock without ever really ripping him off.  Miller stated in interviews that he was inspired by Hitchcock's Shadow Of A Doubt, and I do see a touch of Hamlet in the basics, but the finished product here completely stands on its own. 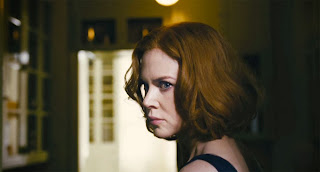 The story follows India Stoker (Mia Wasikowska) who both celebrates her 18th birthday and mourns her father (Dermot Mulroney), who dies in a car accident.  A quiet, awkward young lady (who is also a crack shot thanks to hunting trips with her late dad), she's torn apart, but keeps her feelings quiet.  Her mother, Evelyn (Nicole Kidman) unravels and barely holds on to any form of stability.  Enter India's uncle, Charlie (Matthew Goode), a charming and charismatic fellow who's been traveling the world, living adventures that the sheltered India can only dream about.  Right away, you know there's something not quite right with Charlie, but hey, there's something not quite right about the entire Stoker family at this point.  Despite protests from other family members, Charlie insinuates himself into the Stoker household.  And what's not to like when you first meet Charlie?  He's eloquent, refined, plays piano, and has a sweet ride.  Still, he's pretty creepy.  Not uncle-falling-asleep-on-the-recliner-in-his-tighty-whities creepy, but don't-turn-your-back-keep-him-in-sight-at-all-times creepy.  No spoilers here, but the movie hurtles quietly towards a collision between the truth about Charlie and India's painful coming of age.  What intentions Charlie has and how life will unfold for India are things you'll just have to check out for yourself.

The movie is well-paced and beautifully shot, as Park Chan-Wook comes from the recent wave of Korean directors who paint lavish pictures on film.  Each shot is carefully crafted, guiding you by the eyes.  Miller's story is compelling and mysterious, pushing more and more tension on you until the final moments, including the little twist at the end. 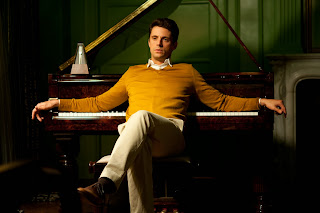 Stoker showed up on a lot of top 10 lists for the year, and I can see why.  There are no supernatural elements here, but yeah, that creepiness factor is ratcheted up a few notches thanks to Goode's performance.  I mean,  he was measured and deliberate in Watchmen, but really carries that over to this role.  Wasikowska and Kidman are equally great as daughter and mother, struggling with age and responsibility as well as mourning.

So until Uncle Charlie shows up on your doorstep, take a peek at the trailer right here...