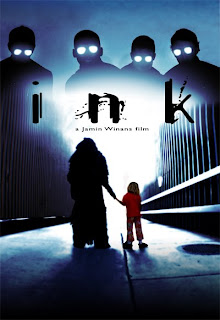 Several months ago, my friend and fellow horror blogger Andre from The Horror Digest recommended a slew of movies to me. From the visceral Martyrs to the emotional suspense of I'm Not Scared, she batted 1.000 with them. 2009's Ink was among those recommended, but it got shuffled around on my Netflix queue to the point where I was surprised to see it turn up in my mailbox. I've got to manage that list a little more closely.

Because I should've watched this sooner.

Ink, written and directed by Jamin Winans, is a study in how to weave a powerful tale - a fable in this case - without the benefit of an enormous budget. It wrote its own rules. It was not afraid of its own imagination. And yes, although there are jump cuts, rapid-fire visual tricks, and echoes of The Matrix (among some other distant relatives), it's what was at the heart of the film that moved me. That's it. This film had serious heart. 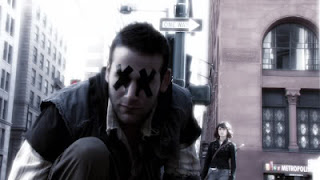 I can't really provide a detailed synopsis for Ink. To do so would be to spoil certain story elements that you really need to experience for yourself. I can tell you this much: after a tender prelude that actually begins with a jarring car accident, we meet little Emma who is watched over - like everyone - by The Storytellers, people who live on an astral plane and who provide the good dreams people have. Their opposites, the creepy Incubi, cast shadows that bring the nightmares. A misshapen, monstrous man covered in chains and cloaks - who we find later is the titular character, Ink - arrives and kidnaps Emma's astral form from her bedroom. Despite the warrior efforts of Allel, Gabe, and Sarah - the Storytellers assigned to Emma - Ink makes off with the girl in an attempt to bring her to the leader of the Incubi. Ink wants to become one of them, and must help sacrifice the girl, but a small drum he uses to open "doors" to other places is broken, and he must take the long road with Emma and soon another Storyteller, the legendary Liev. Meanwhile, Allel, Gabe, Sarah, and the somewhat-insane blind Pathfinder named Jacob must formulate a plan to reunite Emma with her emotionally distant (and for what he believes is a good reason), somewhat douche-y father, John, the man from the short prologue. With all of these strings in motion, the film heads toward a conclusion full of action and revelations, punctuated by a lesson. The journey is beautiful. Music swells and weaves during the thoughtful and the action-packed scenes. Visually, shots are set up to frame not just the disorientation of the adventure, but the characters and their outward emotions. Settings and even the effects just look different. Plus, what you find out at the end of the journey is worth every second it took to get there. I like stories that step outside of linear narrative to push and pull reality like taffy. More subtle than most, Ink brings it all home with a climax that's emotional and exciting, packing two punches instead of one. There's that lesson, and it rings true for all of us: what is important in your life and is your anger or guilt sending you on a downward spiral? What can you do to - as Jacob says - "stop the flow"?

Ink is not really horror, although the Incubi are creepy beyond creepy, but I honestly wanted to include this on my blog and spread the word of a low-budget independent film that was a labor of love and I'm sure not easy to distribute. But once it was out there, peer-to-peer sharing (normally illegal, but encouraged by the filmmakers) and word-of-mouth hurtled this little film that could to cult status. I've seen it classified as science fiction, but that genre doesn't fit it either. Fantasy works, and I like the description of "dark fable." 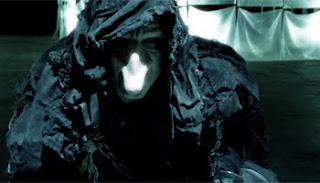 And, oh, the details. Little things I noticed here and there. Among other things, when you see this movie, look for these:

* How the Storytellers appear in our world, like flashes of fireflies or cameras. Sweet little detail.

* How the real world "repairs" itself during a fight scene between Ink and The Storytellers. I love how there's NO evidence that there are forces battling for Emma because the physical world "rights" itself when the astral world makes an impact.

* The straight creepy visual of the Incubi: screens in front of their faces that magnify and distort their expressions, coupled with visual "interference." They rarely speak, but do in hushed tones like a team of conceptual Iagos (woo! Othello reference!).

* Jacob's demonstration of how he listens to the rhythm of the world, and how he can influence it to set in motion something that is designed - no matter how brutal - to help reunite John with his comatose daughter. The music and the cause-and-effect "dance" make for a beautiful scene.

* A single tear running down a certain character's face towards the end, along with the revelation of what has been happening. It's sudden, and it makes sense.

Ink moved me, pure and simple. Many movies claim to be "feel-good" movies, but this one really earned that stripe. It may not be scary, and it may not be disturbing, and it may not be shocking, but once in a while, it's nice to come away from a movie feeling like you really want to smile. And then dream some more.

Watch it. Enjoy. I hope you get the same out of it as I did. Take a peek at the well-done trailer for a glimpse:

Oh! And a quick, unrelated note: I was graciously invited by Nate Yapp of Classic-Horror.com and my good buddy B-sol of The Vault of Horror to contribute to the movie blog, Cinema Geek. I was honored and quickly accepted, so head over there to see articles by yours truly, as well as some of the other great writers from the horror blog community, about movies other than horror.

Until next time, my fellow survivors, sweet dreams...don't let the Incubi give you nightmares.
Posted by Dod at 2:25 PM