5 Things That Skeeve Me Out

I'm someone who is not that easily offended or grossed out by much. I'll watch something with the intestine count of Dead Alive and suddenly remember I need to buy sausages for breakfast. Gross-out comedies don't turn my stomach unless the jokes suck.

But that's not to say I don't get skeeved out by little things. Well, little things to the rest of the normal world, but big things to me. I think everyone has a little something or a bunch of somethings that causes shivers, nausea, fright, and general "ewww" moments. 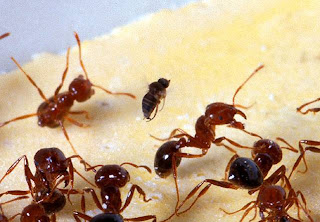 What, those little things? Yeah, them. This spot used to be occupied by spiders, but after being bitten so many times by them and seeing them thin the pest herd in places I've lived, I've been more lenient on them in recent years. Still don't really want actually crawling on me and biting me, but I'm less jumpy about it now. Ants, however, are a different story. I'd never really cared for being around them since I was a kid and picked one up to check out its story and got pinchy mandibles instead. I got older and eventually moved to Florida. I recall one evening, I was pulling the infamous "Kramer pushing the gas gauge" gimmick from Seinfeld and lost the bet. After getting a little tank full of gas at a nearby station, I set about pouring it my car. I felt a little tickle around my ankles and calves, but wasn't paying much attention. Suddenly, WHAMM-O...what felt like a thousand tiny samurai swords fired into both legs. I dropped the gas can, swore in two known languages and maybe one I made up on the spot, and started with the swatting. I then found out why they're called "fire ants." It felt like I'd been torched. Fortunately, it all healed fairly quickly, but I was forever scarred on the inside. It was like one of the ants was a hardened general who shouted out the order "Alright, soldiers - BITE!" Nasty little buggers. 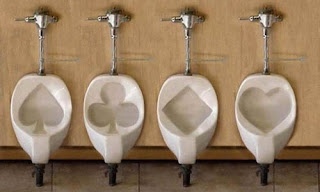 OK, I know, this is really just an uncouth subject, but I'm sure I'm not the only one who can appreciate this. How hard is it to flush a damn urinal? The handle is right there. We all know why we use urinals, but I don't want the evidence of another's existence to remain after they leave. The restroom's already an unclean place - especially in places like sports stadiums, bars, whatever - a little common courtesy would be appreciated. 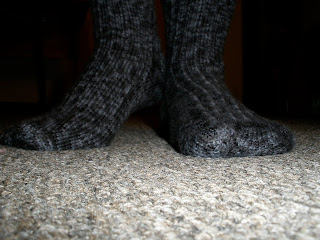 Yeah, huh? The sound of that fabric on fabric reaches into my soul and pokes it straight in the eyes. Most people get the shivers from fingernails on blackboards, but I get the same chill from this sound. Here, just take off your shoes if you're wearing any, find some short-pile carpet, and if you're wearing socks, start scooting your feet like you're priming for a run. Yeah, that's the sound. Thanks, I'm getting the shivers now. 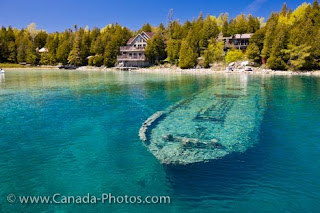 4. Things just under the surface of the water

I love water, and I love to swim, water ski, go boating, you name it. But if I see something just under the surface, I'm going to get creeped out. Sunken boat you can see right there below the ripples? Chills. Something you can't see, but you know is there? You know, like when you jump off a boat in the ocean and you know there might be sharks around? It's that feeling. And I've done that, too. The shark thing is pretty understandable, but something stationary? That I still don't get. I'm pretty sure the origins for this nutty thing came from when I was a kid and I saw the trailer for Shock Waves on TV. Those blasted Nazi zombie-things shuffled along - you guessed it - just under the surface of the water. Damn it, it's still creeping me out! Check out the trailer:

See where that could get into a kid's head? 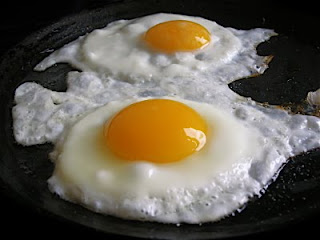 5. Biting into something crunchy when the food is supposed to be soft

More than I like swimming, I love food. I love it enough that I have to discipline myself when I'm around it. Wait...no...I don't love food that much, get yer minds outta the gutters. I always take for granted that my food has been prepared perfectly, no matter if it's Burger King or Morton's Steakhouse. That's what makes a crunchy surprise in a soft food so frustrating. Perfect example: frying up some eggs, then taking a bite only to find that a stray shard of egg shell has plopped into what was a delicious breakfast. *Crunch* After that, I'm so paranoid about more shell that I'm not thinking about how good the eggs are. Then the rest of the day is ruined. Well, at least until my next meal. But that unwanted crunch has anchored into my subconscious.