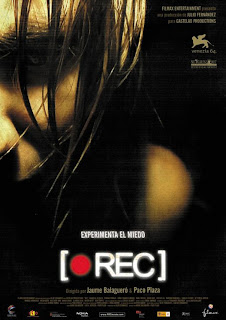 Some spoilers may lace this entry. Taste with caution.

A linear story. A simple location. A loss of control. You can't turn away!

Three very basic ingredients mixed together by writers Jaume Belagaro and Luis Berdejo, and baked by Belagaro and Paco Plaza in the beautiful oven of Barcelona, Spain, to make the delicious dish known as [REC].

Yeah, you see what I did there. Food analogies. I'm going somewhere with this.

The average movie-goer or novice horror might believe - if just for a moment - that [REC] somehow copied an American film called Quarantine. I mean, it's easy to think that, really. Same plot. Nearly the same players. Filmed in the same first-person way. However, Quarantine is a fairly decent remake of our subject. I personally thought Quarantine was pretty good, and I expected [REC] to be slightly better. I felt - and quite happily - that [REC] was not only far superior, but one of the best horror films to grace my DVD player in quite some time. And I've seen some good ones lately.

So how does this horror equivalent of a fine dinner experience unfold? Well, tuck in your napkin and I'll tell you - without spoiling too much, if I can help it.

OK, throughout the entire movie, we see only what Pablo's (Pablo Rosso) camera sees, for this is a television taping. Angela Vidal (the cute-as-a-button Manuela Velasco) hosts a documentary series that covers what happens while the residents of Spain (well, those with normal daytime schedules) are sleeping. Hence the name of the show, "While You Sleep." We never see Pablo's face, but Angela guides us and Pablo through the terrifying events that occur inside the apartment building that provides one of two sets of the movie. The other set is a firehouse, where the movie begins. For this installment of her show, Angela is visiting a local firehouse to see how the firemen cope with overnight life. She visits the cafeteria, plays basketball in the gym, and quietly hopes - trying not to sound morbid - that the firehouse gets a call so they can show the firemen in action.

The call finally comes: a woman is screaming, trapped in her apartment. Angela and Pablo join two of the firemen and policemen in investigating the emergency, and along the way we meet many of the denizens of the old place, all complaining about the noise. They're a cross-section of average Spanish citizens from a variety of backgrounds. Many would say that here is your buffet of cannon fodder. They would not be wrong. 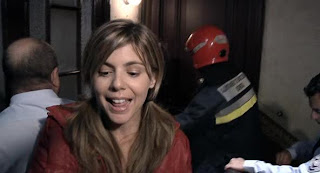 When they get into the apartment, they find the lady, cowering in the dark like a David Lynch character. Can't quite...see her properly. The obviously sick lady becomes Sick - with a capital "S" - when she bites down on one of the policemen and going after the others before she's shot. This routine call just went from tense to strange to downright bloody chaos in a matter of seconds, and it's all caught with Pablo's camera.

What follows is claustrophobic, frustrated terror as everyone inside is quarantined (yeah, see where they got the name for the remake?). The poor cannon fodder tenants are sealed inside with no explanation and faced with death by sniper if they try to escape. There must be some disease here, because people aren't taking the bites very well, and there was already a sick little girl to begin with - flu, they think. This is a movie about disease...what do you think it is? When a health inspector enters to assess the situation, he gets caught up in the bloody, bitey carnage.

It all comes together as to why the authorities are there, how they got there so quick, and the connection to one of the tenants inside. But it's all going to hell, and no one has time to sit around and think about the ins and outs and the whys and hows. People fall left and right, until it's just Angela and Pablo. That quick scene of the stairwell teeming with the infected, all growling and moaning as they sprint up the stairs, is utterly terrifying.

Like a great survival horror video game on speed, our newscasters must find a key to a door under the building. Finding the key was tough enough, but they are soon forced into a penthouse where a man from the Vatican lived. I'm not going to go into the details of this part of the movie. I can only tell you that the clues in the Vatican agent's pitch-dark apartment - think of it: why is someone from a religious powerhouse there? - lead to a chilling implication. Much more chilling than the remake, by far. And did you really think they'd be alone in this apartment?

It's safe to say that I absolutely dug this flick. Insane, fast-paced, and disturbing...all from a first-person perspective. You are there. You can't look away. And really, you shouldn't since this movie is an Awesome Sandwich.

There I go, back to the food analogies again. Those biters outside the safety fence are really carved on my subconscious, I suppose.

Let's see if I can be more consistent with this thing.

Take care, and I'll see you from the chopper.
Posted by Dod at 8:34 PM No comments: