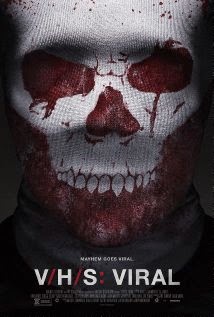 I'm telling you, I was really hoping for more from V/H/S: Viral.  I like the whole found footage anthology bit and having the franchise populated with short films from talented up-and-coming directors.  The trailer looked wild.  Everything was in place.  Still, I came away from it not quite satisfied.  Kind of like when I eat at Taco Bell.  I like some of the parts but as a whole, I'm wondering what I just ate.

Like the previous two V/H/S films (which I reviewed here and here), this one is split into smaller stories bound by a wraparound narrative.  The wraparound in this case is called "Vicious Circles," and is directed by Marcel Sarmiento, who helmed my favorite entry in the first ABC's of Death movie, "D is for Dogfight."  The wraparound kicks off the narrative of a video-fame-obsessed young man chasing a strange ice cream truck in the middle of a police chase.  Seems the truck has somehow kidnapped his girlfriend and as the chase progresses, we're privy to some of the videos apparently broadcasting from the truck.  Much like the first two films, the videos are cursed and in this case, are affecting people on a wider scale.

The first film within a film is called "Dante the Great," directed by Gregg Bishop, who directed the wonderful Dance of the Dead.  Now this one tells the story of redneck amateur magician Dante (the always-good Justin Welborn) who somehow gets a hold of a mysterious cloak that gives him incredible powers.  Of course, like any good boy will do, he uses them for fame and fortune.  Unfortunately, he also uses those powers to feed the beast inside the cloak.  Not tacos, sadly, but a few of his assistants.  Things come to a head when one of his assistants decides to fight back. 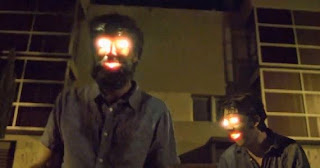 I'll just go ahead and say that the second entry was my favorite.  Nacho Vigalondo's "Parallel Monsters" is a seriously creepy what-if.  In this case, it's "what if you opened a portal into a parallel universe at the same time your parallel self did?"  As the protagonist explores the other world, it becomes apparent that the term "parallel" doesn't really fit.  The word should be "opposite."  I mean, really opposite.  As a huge fan of stories about parallel and alternate universes, the details really made my skin crawl.  There is a distinct "Twilight Zone" vibe to the story, but that's really what's the heart of these movies.  They're a modern-day, bloodier horror homage to Rod Serling's series.

Finally, there's "Bonestorm," which would be a freakin' AWESOME name for a metal band, about a group of delinquents filming skating videos in a place where they shouldn't.  Heading to Mexico, they accidentally disturb an evil cult's "unholy ground" and end up filming their struggle for survival.  The effects in this segment directed by Aaron Moorehead and Justin Benson are pretty snazzy and the kinetic camerawork conveys the panic of the moment.  Still, I just couldn't find any sympathy for the characters based on their mostly jerky actions throughout the setup. 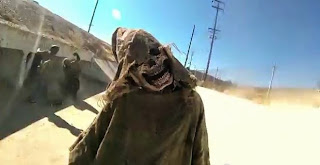 I really would've like to have seen the missing segment, Todd Lincoln's "Gorgeous Vortex," which is apparently quite good based on reports of those who have seen it.  It might have tied the movie together a little more tightly.  The wraparound is on the right path here, but something is missing.  I don't know; maybe slightly more narrative or a brighter thread that weaves the stories into the same overall story.

"Parallel Monsters" was definitely my favorite of the bunch for its inherent creepiness and WTF factor. "Dante the Great" wasn't far behind simply because it's the most fun.  I wanted it to be better, and V/H/S 2 was on an uphill trajectory.  Despite being a little disappointed in this installment, I do hope the franchise continues as it is a great showcase for talent deserves a wider audience.

Now, let's see what VHS tapes I have in my storage bin...wait, I've never seen this one before...