Some Guy Who Kills People (2011) Some Pleasant Surprises 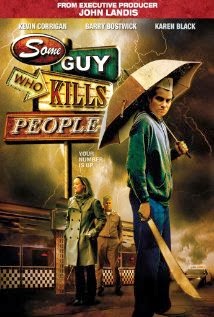 I had heard a little bit about this small film called Some Guy Who Kills People, and with that title alone, I knew I had to take a look.  It smacks of horror-comedy with a wink and a nod which, when done right, is usually a good time at the movies.  I didn't get that, but what I got was definitely a nice surprise.  Yeah, sure, the wink and nod were there, but what I didn't expect was how much heart the movie had.  While fitting firmly in the horror genre, it also owes a lot to the whodunnit as events unfold. 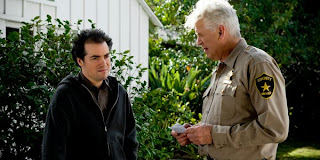 Written by Ryan A. Levin and directed by Jack Perez, Some Guy Who Kills People is the story of hapless Kevin Boyd (Kevin Corrigan), a man just coming off a stay at a local mental hospital after suffering a nervous breakdown and overwhelming depression.  He lives with his mom (Karen Black), works in an ice cream shop with his one friend Irv (Leo Fitzpatrick), and has sad memories of a group of bullies literally torturing him.  One of those bullies, now older and fatter, suddenly turns up dead with a hand axe buried in his forehead.  Sheriff Fuller (Barry Bostwick) attempts to solve the crime, which turns plural when another of the former bullies shows up dead (and headless) - all the while wooing Kevin's mom.  What Kevin refuses to realize is that he has more going for him than he thinks:  he's caught the eye of a young British woman named Stephanie (Lucy Davis), he's a fantastic artist, and he finally meets his 11-year-old daughter, Amy (Ariel Gade), the product of a one-night stand years before.  Amy is a breath of fresh air in his life, even if he doesn't want to breathe.  She's brilliant and straightforward, and also has problems he can relate to.  But there's that pesky issue of former bullies turning up dead.  Everything sets on a collision course in Act 3 that I just won't spoil here. 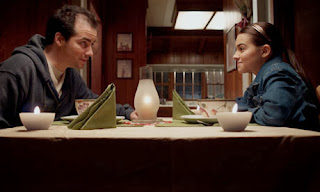 I really like it when I set out to see a movie, expecting it to be pretty good, and discovering it to be really, really good.  That was the case with Some Guy Who Kills People.  It's deftly written and directly, and the acting is tremendous.  Corrigan, who played a mysterious information broker on the great sci-fi series Fringe, is perfect as Kevin.  He comes across as awkward, nervous, unsure of himself yet harboring dark secrets.  He doesn't say much at first, and when he does, it's in short bursts.  Gade is amazing as Kevin's daughter, Amy.  Whip-smart and outgoing, she's the complete opposite of her father, and she is comfortable and natural in the role.  Bostwick is also outstanding as the town sheriff, equal parts dim bulb and brilliant detective.  He commands every scene he's in, and offers some of the movie's best lines of dialogue.  He's funny, and you often wish he'd use his brain a little more, but man, is he likable.  Really, everyone has shining moments in this film, supporting and main characters.  Davis is sweet and awkward, and the late Karen Black plays the mother as complex and often mean, but ultimately she's a mother who loves her son.

Pleasant surprises are always welcome when I'm watching a movie, and Some Guy Who Kills People brought some heart and soul to a familiar pair of genres.  Just good stuff from beginning to end.  Great way to cap off the holiday weekend!