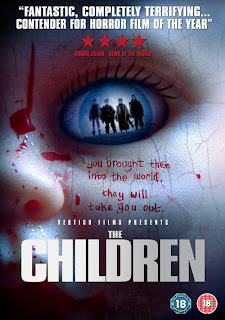 You know, I can relate to kids. I'm trained to be an elementary school teacher. I can talk to them on their level. I'm somewhat of a big kid myself, as I like video games, superheroes, and fart jokes. But in the world of horror, no one - and I mean no one - is exempt from being an antagonist wielding sharp things. With a title like The Children and a tagline like "You brought them into the world. They will take you out," it should come as no surprise who the antagonists are in this low-budget gem.

Written and directed by Tom Shankland, The Children takes place in the remote English countryside around Christmastime. One family consisting of parents Elaine and Jonah (Eva Birthistle and Stephen Campbell Moore), teenage daughter Casey (Hannah Tointon), middle daughter Miranda (Eva Sayer) and withdrawn youngest Paulie (William Howes), visits their relatives joined by the sisterhood of Elaine to Chloe (Rachel Shelley). Chloe's married to Robbie (Jeremy Sheffield) and they have two tykes of their own, oldest Nicky (Jake Hathaway) and little Leah (Raffiela Brooks). There, all players are in place for the carnage to begin. 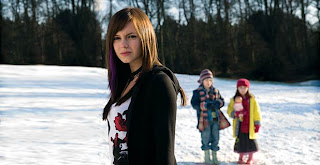 Something's not right from the start. Little Paulie is sick, and they pass it off as car sickness. He's quiet, except for banging on a small xylophone. Constantly. Knock it off, Paulie. He gets weirder as the night goes on, even slapping his own father at one point. The other kids are hyper and very much the model of yuppie children. The parents don't do much to calm them down. Casey's the lone exception, a typical pissed-at-the-world teenager. She'd rather be going to a party with her friends, but she's stuck with her relatives. The kids play loudly before settling in for sleep, but Leah coughs up some goop and like a good kid, wipes it on her pillow.

The next day, everyone's playful and no one seems to be sick. And hey, where's that cat? There's a little accident with the sled when Paulie lets it hit Chloe, who spills hot drinks all over Jonah. Jonah gets yuppie-pissy and punishes Paulie while yelling at Casey. Casey's had her fill and enters the greenhouse later to find Robbie having a smoke. There's some bizarre, slightly sexual tension going on that thankfully never goes past this scene, but there is an awkward moment when Chloe walks in and probably assumes the worst.

At dinner, Chloe takes the moment to bring up Casey's forbidden tattoo, but her plan to embarrass her niece never comes to fruition as all the kids go bonkers...crying, yelling, moaning. Like a shared hive-mind or something. Casey's had enough and goes to meet her friend, as they had planned to go to the party all along. The adults are bamboozled, but Robbie takes the kids outside to get them to burn off this weird steam. He gets on a sled, but Nicky pulls a wagon in front of him, causing him to literally get scalped by a hooky, sharpy thing. Blood, blood everywhere, staining the pure white snow. Quite an image, really. The kids freak out again - and I'm telling you, there's a lot of kid-shrieks in this movie so be prepared - and, with the exception of Miranda, bolt off into the woods.

The little tykes go from yuppie-spoiled to Children-of-the-Corn disturbing little nutbars. they cause Elaine to fall off the monkey bars, twisting and breaking her leg in the process. They cut open and insert a freakin' DOLL in the actually-still-alive Robbie's abdomen. It's obvious they did something to that cat, too. They terrorize Casey and Elaine in the greenhouse. Paulie breaks in and assaults them with scissors before being kicked back onto a sharp shard of glass. Yes, a child dies, and the only sensible one in the movie, Casey, sees this as reasonable even though it's her little brother. She's the only one that sees something is wrong with the children.

That doesn't stop Chloe from blaming Casey for all that's happened. Worse, Jonah won't take his daughter's side. Elaine is the only one to believe it all and the sides are split. Chloe takes off into the woods to find her kids while Casey barricades the doors. Panicky Chloe finds her kids - or rather her kids find her - and it's not the best reunion. Well, not for Chloe. They pull her down and stab her in the EYEBALL.

Back in the house, Miranda has crossed over to the dark side. When Casey tries to find the cordless phone, she discovers Miranda hissing and playing "Smash The Cordless Phone." Jonah arrives in the nick of time to misunderstand the situation - and Casey is trying to strangle Miranda after all. Jonah clubs Casey and locks her in the room. This supposedly brilliant guy still can't see what's happening and decides to leave Casey and Elaine, taking Miranda and putting the house in his rearview mirror.

Leah and Nicky return, getting into the house through the dog door and catch up to Elaine on the stairs leading to the room where Casey is trapped. They slowly ascend the stairs to the injured, confused, and defeated Elaine who simply mutters "I can't" when faced with a chance to use the fire poker she scooped up. Casey breaks through the door enough to grab an advancing Nicky and impaling his FACE on sharp door wood. Elaine won't let Casey kill Leah, and they leave in the remaining car.

Down the road, they find Jonah's car, swerved off the road, blood on the windshield. Casey finds Jonah's body buried in the snow, but no Miranda. Oh, wait, there she is, running full tilt at the teenager until Elaine steps on the gas and car checks her daughter into the back of the crashed car in one of the most stunningly-filmed - albeit quick - death scenes I've seen. It just looked, well, crazy.

Suddenly, creeping out of the woods, there are more kids than at a Wiggles concert. They advance slowly, knowingly. It's as if they now know they're in control...of everything. Casey barely makes it back into the car before her mom pops the clutch and leaves the murderous rugrats in the dust.

And, uh, Casey...you're looking a little rough around the edges there...

The Children is a neat little package that starts with a few clues here and there, then steamrolls towards a chilling conclusion. Those clues? When you watch the film, listen closely as to what Jonah does as a living. He helps create inoculations against diseases. It's his youngest that's sick. I assumed that he may have brought some of his work home with him. Places like the CDC and its worldwide cousins are supposed to be airtight against escaping contagions, but no one's perfect. Just ask everyone in "The Stand."

There are a few questions to think about as the movie ends, too, which I always find stimulating if it's done right. Was Casey infected or just really worn out? If the infection starts with the youngest and works its way up, will adults eventually be infected? After seeing this movie, do I still really want to be a teacher?

I was also reminded of Garth Ennis and Jacen Burrows' insanely unsettling comic book series "Crossed," which features a contagion that causes people to turn utterly and completely evil in the most frantic and destructive of ways. The kids share a certain glee in the killing and sadism, much like Ennis' script has people doing. I had just read Crossed #8 right before the movie, so I was in that frame of mind. 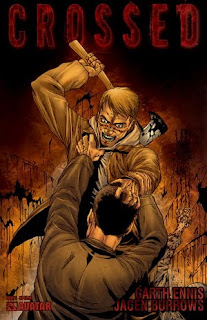 Great little movie with some natural acting - the kids are supposed to be spoiled brats - and shots filmed in such a way that you only see quick glimpses of carnage, but the images stick to your mind like drying blood.

I'm out for now and remember, stay away from cities during the outbreak.
Posted by Dod at 9:33 PM