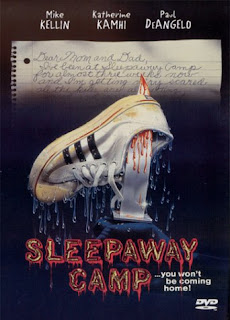 OK, so I couldn't resist using that old chestnut of a joke in the title. It didn't really take me long to watch the movie, but I started it in the last throes of 2009 and finished it at the end of New Years Day, 2010. It's an old joke, and not a good one, so let's not dwell on that, shall we?

I'm a child of the 80's, that much has always been evident. My formative years were spent in a neon and day-glo haze, as I railed against preppies and cherished my toaster-sized Walkman with its tape of Asia's first album. The 80's were a great time to experience horror films, especially in the slasher genre. Those types of movies exploded so fast and furious, they eventually became parodies of themselves. But mixed in among that slew of films that came out, with their increasingly creative ways of offing the cannon fodder, there were some real classics and some real memorable pieces of work.

WARNING: Spoilers lurk ahead, especially towards the end.

Sleepaway Camp was one of those memorable pieces of work. It never really seems serious, but has a shocking undertone. It's a little like Meatballs done as a juicy murder mystery with a twist. Directed by Robert Hiltzik, it's a great mirror into my past...only without the murder, psychosis, and by GOD I didn't wear those shorts. Honest. Except for gym class. Damn it, didn't want to admit that.

The movie begins with a prologue, standard in its way for horror films as it sets up our premise. A horrible boating accident caused by inattentive, dumbass teenagers takes the lives of two innocent people, one a child. The other child in the boat is sent to live with relatives, including cousin Ricky and his ultra-kooky mom, Martha.

Flash forward eight years, and Martha is sending off Ricky and Angela to camp. Angela is quiet and reserved, to the point of practically being a statue. Ricky is fiercely defensive of Angela and is constantly there to protect her, no matter the size or number of antagonists. It doesn't take long for trouble to start when Angela is cornered by the creepiest cook in all of moviedom, Artie. Artie's soliloquy about the incoming young girls at the camp is enough to make you want to sandpaper your mind. Not long after Ricky rescues Angela, someone forces a pot of boiling liquid and Artie to meet, sending the massive creep off to the hospital with massive injuries. Camp owner Mel gets the staff to keep the incident quiet, and camp goes on as normal in the 80's. 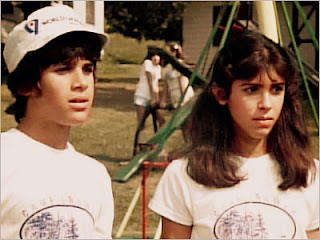 
At a social event later in the day, and after Ricky and his fellow younger campers had won a baseball game against the meaner older kids, Angela is again accosted by some of those same older kids. She's quiet, staring with big dark eyes, and never fights back. Ricky defends her, getting into a fight, which is quickly broken up. Ricky's buddy Paul, a seemingly decent kid, takes a shine to Angela and actually breaks through her wall a little just by being an OK guy.

During some camp shenanigans, a douchebag camper named Kenny lures a girl out onto the lake on his canoe. His real canoe, that wasn't a euphemism. After some horseplay, the canoe tips and the girl swims to shore. Kenny pops up under the overturned boat and finds he's not alone. Whoever it is shoves him under the water, drowning him. Mel's really starting to stress at this point, but he thinks he's got it under control.

Later, after Angela is pelted with water balloons, Ricky goes ballistic and lets loose with a tirade against the leader of the boy bullies, Billy. Billy later has an unfortunate bathroom experience when someone locks him in the stall and drops a bee's nest into it. Those must have been some fierce bees, as Billy is given the dreaded WICKER MAN REMAKE FACE O' BEES.

Mel starts to lose his shit, and is pretty sure that Ricky is the one behind the murders, since they're connected to the bullying of Angela. Meanwhile, Angela and Paul grow a little closer and he starts making moves on her, hoping for a little make-out session on the beach. Ah, those romantic 80's. Angela freaks out during a memory of her father and his gay lover, and runs away, which confuses the pseudo-nice guy. The next day, camp trollop Judy successfully gets a kiss out of Paul in front of Angela, which sends the poor girl running again. Paul's pissed at himself as well as Judy, and tries to apologize repeatedly to Angela. No sooner does he leave the scene when Judy and Meg really tear into Angela, eventually throwing her in the lake. Mel confronts Ricky, who's frantic to save Angela. He helps her, but by now, even the little kids are throwing sand at the poor, quiet girl. Ricky swears vengeance. Vengeance, I tell you.

Meg, after making a Creepy Date with Mel, hops in the shower in a nearby empty cabin. Yeah, that's always a formula for success in a slasher film. Sure enough, here comes someone with a knife, who slices a deep line right down Meg's back. Guess no date with Mel.

Later, at another dance, Paul tries again to reconcile with Angela. She tells him to meet her at the beach, and Paul is excited. Meanwhile, in another part of the camp, the little kids are attempting to have a night in the woods, but a couple of them can't handle the big, bad outdoors and want to go back. When the counselor returns to the campsite, he finds the ones left behind filleted in their sleeping bags. And let's not forget Judy, who dies a death by curling iron. It is implied that said curling iron is introduced to a body part better left unsaid. Ouch.

Meg's body is found, and Mel goes off the deep end. He pulls Ricky into the woods and bludgeons him into oblivion, leaving him for dead. Right about then, the real killer finds Mel and fires an arrow into his Adam's apple. There, now Mel can drool over Meg in the afterlife, if there's a special room there for creeps.

Oblivious to the danger, Paul finally meets Angela on the beach. She's really opening up now, telling him she's ready to go swimming, which is a pretty big step given her fear of the water. Angela tells Paul to remove his clothing, which is the greenest of lights to the adolescent male.

The camp's in a tizzy now with bodies coming out the faded woodwork. The search for others goes into the woods and to the beach, where two counselors find Angela, rocking back and forth and humming a sweet little tune. Paul's head is in her lap. Literally. Paul's head is in her lap. Here, we're treated to a flashback. Turns out this isn't really an Angela...it's Peter, who survived the boat accident at the beginning. Aforementioned kook-on-wheels Martha decided she didn't want to raise another boy, so made Peter into Angela, her new "daughter." 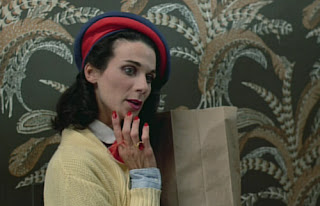 Lady, you're not helping things.


Angela finally stands and reveals herself...himself...in full, unseeable glory. The expression on Angela/Peter's face is so wonderfully disturbing, that will actually haunt you more than the full body shot, trust me. 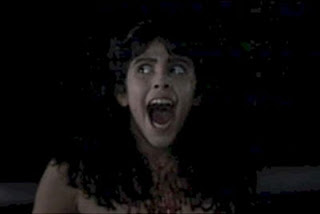 Well, there go any dreams of unicorns and rainbows tonight.


Sleepaway Camp is over-the-top glee that approaches parody, but doesn't quite cross over into that territory. That's a fine line to walk. Felissa Rose is, I think, brilliant as Angela. At one point, bully Meg is practically driven to hysterics because Angela won't respond to her needling. Angela just...stares. Big, dark eyes just unwavering. Every emotion is subtle from the introversion to the brink of madness and beyond. Well done, Felissa, well done. I'm glad to know she's still very active, as shown on her website.

80's slashers were a special breed. Special enough to deserve its own genre label. This movie was a trip - every line was delivered with such relish. I'd call it overacting, but hell, you can't blame them. It seemed like the cast was having a good time.

And how could you not in those shorts?
Posted by Dod at 11:08 PM