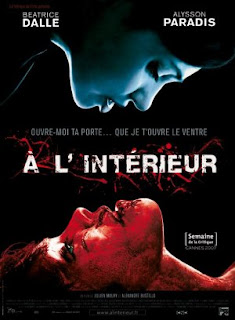 Of the four French extreme movies recommended to me by my dear friend Andre from The Horror Digest, À l'intérieur (aka Inside) was the only one that arrived to me with a reputation preceding it. I had read various accounts of the most steel-stomached viewer feeling an urp of queasiness upon watching certain scenes of this movie. I'd better dollars to raspberry jelly-filled donuts I know which scenes they spoke of after watching it. I had that fluttery anxiety to see things unfold and it reminded me of that same feeling arising when I first viewed movies like The Thing and The Exorcist, where my own subconscious had built up a reputation for each of those films.

Inside is, as I mentioned earlier, a French film and has many of the elements of the other French extreme films I reviewed. I'll get into some of those similarities later, but right now, let's get the introductions out of the way and dive right into the review:

Directed by Alexandre Bustillo and Julien Maury, it takes place mostly around Christmas Eve in a Paris suburb. We're given a setup as the movie begins, right in the womb where a baby rests comfortably until the screeching of tires and a horrifying crash. The baby hits its head and blood fills the amniotic sac. In the outside world, we tragically meet pregnant Sarah (Alysson Paradis) and her husband, Matthieu (Jean-Baptiste Tabourin). There has indeed been a horrible accident, and its claimed the life of Matthieu.

Flash forward four months, and Sarah is still bearing the physical scars of the accident. The mental scars run so much deeper, it's not even funny. Sarah has become anti-social and withdrawn (although that creepy nurse would drive me into a shell, too). Her mother Louise (Nathalie Roussel) wants her to be with family on the holiday, and everyone including her boss, Jean-Pierre (François-Régis Marchasson), only want the best for her during what has to be an insanely difficult time. Sarah just wants to be left alone with her photography and fantasies of Matthieu still being alive. Nice creepy/romantic scene when she imagines his embrace, and his hands slowly glide across her pregnant belly before she's snapped back to reality by the doorbell.

If there was ever a moment in film where you wanted to yell out "don't answer that door!," this would be it. On the porch, in the shadows, is a mysterious figure. A woman with a rather deep voice begging to use the phone as her car has broken down. Sarah's wary, and lies to the woman, saying her husband is asleep and doesn't want to wake him. The woman (Béatrice Dalle) suddenly knows Sarah by name, and knows that Matthieu is dead. She still demands to be let in. Freaked, Sarah tries to snap some pictures of the woman through a kitchen window, but only gets a faint shot of her face. The police arrive to find nothing, promising to check in on Sarah every so often.

Sarah develops the film, including shots from the park earlier that day and actually sees the woman stalking her in one of them. It's sinking in that this is really serious now. Exhausted and sure the woman is gone, Sarah goes to bed. This is where we see more of the mysterious, unnamed woman as she pads through the house, collecting various items like alcohol and scissors. Yeah, sharp objects. Pregnant woman. Insane lady. This does not add up to a desirable situation for Sarah. As you might think would happen, The Woman attempts a C-section right there in the bedroom. She gets as far as the scissors entering the belly button before Sarah is shocked awake and manages to escape to the bathroom.

The Woman is, yes, certifiable. She makes it clear that she wants Sarah's baby, and it's pretty damn obvious that she'll do anything to get it. The Woman finds her plan isn't perfect, though, as Jean-Pierre shows up to check on Sarah. Meeting him downstairs, The Woman leads him to believe she is Sarah's mother and brings him a drink. Then, like a Three's Company episode broadcast in Hell, Sarah's real mother shows up, demanding to know where her daughter is and who The Woman is. Louise heads up the stairs to find her daughter, but a case of mistaken identity causes a spike to find its way into Louise's neck. Sarah has accidentally killed her own mother. That on top of everything else - the side kicks to the emotional center of Sarah's brain are relentless. 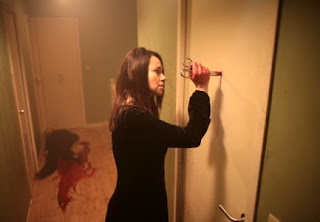 Jean-Pierre dashes up the stairs to see what's causing the commotion and finds a bloody Sarah pleading for help. Her, and the blood-soaked body of Louise. Before Jean-Pierre can react, The Woman stabs him behind each knee, in the nether regions, and repeated in the face before slashing his throat. This woman is...a little off. Jean-Pierre isn't quite dead yet, but a pillow on the face and one random stab there is all it takes. Surely the body count can't rise any more, right? 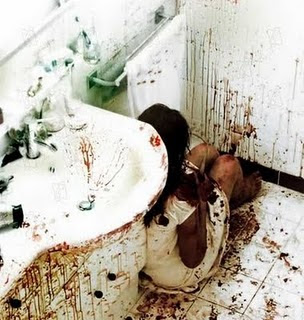 Here come the police, with a recent teenage arrest in tow, to check on Sarah, just as promised. Two of them talk with The Woman, but they aren't convinced - Sarah's pregnant, The Woman is not. One heads up the stairs to find Louise and the splashes of blood, then tells the other to arrest The Woman. She's prepared though, and shoves a knitting needle into the cop's eye before taking his gun. The upstairs cop finds Sarah - or rather her left arm, impaled by the hand to the wall by a pair of scissors. He frees her and before he can do much of anything, half his head is blown away by The Woman, who keeps firing at the bathroom door. The cop outside hears it and drags his teenage prisoner in to investigate. They discover Sarah huddled in the blood-painted bathroom and it looks like maybe, just maybe, Sarah could get out of this. Then the lights go out. The cop tells Sarah to go to the bedroom and wait there while he and Abdel try to fix the lights. That doesn't go so swimmingly, as The Woman shoots the last cop in the head, then stabs Abdel in the forehead with the scissors.

When Sarah makes her way down the stairs, she discovers the bodies of...well, pretty much everyone. Scooping up a knitting needle, she confronts The Woman, but this time with her own twist. She aims the needle at her own belly, threatening the child this crazed lady wants so badly. Still unrelenting, The Woman brains Sarah with a toaster before crouching down to light up a gloating cigarette. Sarah's not down yet, and in a scene that actually had me cheering out loud, she sprays The Woman with oven cleaner just as she lights up. Fireball to the face! With most of her hair on fire and half her face scorched beyond recognition, The Woman retreats while Sarah gives herself an impromptu tracheotomy (which provided a real eww moment with blood bubbles). She then fashions a crude spear and searches for her assailant.

The Woman cowers in a closet and as Sarah's about to deliver the killing blow, all the cards are set on the table. Turns out The Woman does have a connection to Sarah: she was in the other car in the accident. It was her baby we saw at the beginning of the movie, and it did not survive the accident. The Woman wants Sarah's baby to make up some kind of twisted settlement in her fevered brain.

Suddenly, the lights come back on. At the junction box is the last policeman assaulted by The Woman, his stance wavering. How he's alive after being shot in the head is anyone's guess. When Sarah tries to talk to him, his confused state of mind confuses her for The Woman and he attacks her, hitting her in the stomach with a baton. He's enraged and almost demonic...I mean, look at his eyes when you see this. Also, look at the address of the house: don't know the street name, but the number is 666. Was there a secret subtext there, I wonder? From out of the blue, The Woman actually rescues Sarah, or actually the baby, by stabbing the policeman to death with the homemade spear. 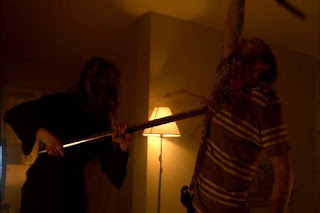 Sarah's in labor, though, and The Woman calmly performs the C-section she set out to do earlier. The camera does not shy away. I mean, you are made to stare directly at Sarah's belly as The Woman does what she can to open it up and reach inside to deliver the baby. The last shots are of a defeated and dead Sarah lying on the stairs, as the scarred Woman settles into a chair with the baby, alive and presumably well. Fade to black.

There are a lot of constants in these French extreme films, not the least of which is a strong female lead. Not only is she usually a great actress on the real life end of things, but the character has to have some otherworldly resolve. There is also a conservation of cast members. With the exception of Frontier(s), the casts of these films I've enjoyed have been fairly small. It lends itself to the next area I found to be constant, the visceral emotions that really make up the genre's definition. Feelings of being trapped, being pursued with no routes for escape, the loss of dignity and personal power (see: hair cutting). Add to that this basic but powerful basis for fear: pregnant woman assaulted by psychotic with sharp instruments. Pregnant belly. Sharp. See, no matter what, those two phrases do not go together. Like Alfred Hitchcock's Psycho capitalized on the visceral fear of naked vulnerability in the shower scene, this film takes those phrases and forces them together with disturbing results.

So, yeah, the reputation of this movie was well-deserved. If you think there might be just a little blood in this movie, you're severely underestimating it. Hell, the title credits are set against a swirling bloody background. This film tells you to leave your stomach at the door because you may lose it before it's over. But if you want something intense and just a tad over-the-top, definitely introduce it to your DVD player.

I know I'll be studying the shadows a little closer...
Posted by Dod at 6:00 PM