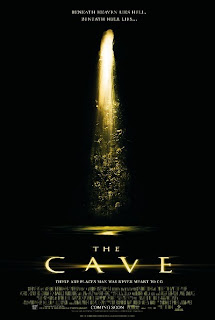 After white-knuckling it through four amazing French extreme films where the bar for cinematic tension was raised to new levels for me, I knew the adrenaline high wouldn't last forever. I was due for a rest stop, the movie equivalent of a light snooze, and with 2005's The Cave, I found it. 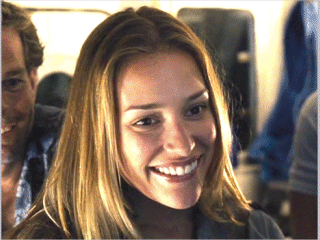 She's in this movie? Fine, I'll give it a chance.


I'll address those right now: The Descent is the superior movie between these, and they really shouldn't be compared as they're two different films altogether...I'll mention my total letdown in the tension department later...and yes, Piper Perabo played a major part in my choosing this movie. There, I admit it.

The Cave was directed by Bruce Hunt and has admittedly what I thought would be a great cast: Cole Hauser (Dazed and Confused), Morris Chestnut (the recent "V" remake), Eddie Cibrian ("CSI: Miami"), Daniel Dae Kim ("Lost"), and the aforementioned Miss Perabo (Coyote Ugly) among others. It was an interesting cast, and I thought there would be some diverse acting styles and dialogue, but...I don't know.

The plot is pretty basic: group goes into cave, gets trapped, picked off one by one by darkness-dwelling creatures. Thank you, good night! Remember to tip your waiters and waitresses.

That said, the recap might be a bit short so maybe I'll spice it up. To start, we're treated to a prologue which sees a group of cavers in the Carpathian Mountains enter an old abbey to explore the cave network below it. Well, less enter than blow a hole in the floor that swallows them up. Oh, and sets of an avalanche from the mountain behind the abbey, which obliterates the church. I guess one of the things this expedition forgot was a demolition expert. That's "expert."

Cut ahead about 30 years and your typical old college professor Dr. Nicolai (Vlad Radescu) along with his associate Kathryn (Lena Headey) explore the site as they are among a group of scientists who believe there's an entirely undiscovered ecosystem in the vast network of caves. They hire Jack and his crack team of battle-hardened superheroes. Okay, well, they're not superheroes, and they're not really battle-hardened. In fact, they are all quite pretty. For a roll call, we've got leader Jack (Hauser), his brother the hot-headed Tyler (Cibrian), rock climber Charlie (Perabo), survival guy Top (Chestnut), scout Briggs (Rick Ravanello), and sonar mapper Strode (Kieran Darcy-Smith). The final piece in the cannon fodder puzzle is photographer Alex (Dae Kim). They're confident and excited to head into the cave system. I mean, wouldn't you be if it was as WELL LIT as this one was? Sigh. 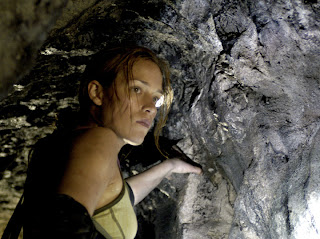 Piper is concerned that I have mentioned her far too often in this blog.


Well, anyway, Briggs scouts ahead, finds them a second base camp and encounters some of the local wildlife: a fearsome naked mole that looks like a scab with legs. Maybe "fearsome" is not the word. Let's try "adorable." Communications cut off and everyone is worried that the moles have, I don't know, tickled Briggs to death. They set off to the new base camp. On the way there, group genius Strode is distracted by some underwater creature that snakes by him. I've seen pictures of moray eels. I don't want to chase one under a mile of rock in some subterranean death trap. Thankfully, these tunnels are so WELL LIT. Strode surfaces to find half-eaten cave moles and another larger, toothier creature which decides he is more the cut of meat it wants. In his dying throes, Strode manages to let his whatever-they're-called, water scooter, loose to crash and explode against the cave walls. The resulting rockslide effectively traps the party.

Looking for a way out, Jack encounters a nest full of albino scorpions (which were actually pretty badass) and another of the bigger, meaner creatures. He manages to escape, but he's scratched up pretty badly. Now they know they're up against something the Knights Templar apparently battled centuries ago, according to local legend. Supposedly demons, but some scientific research tells a different story. Kathryn discovers an aggressive parasite on the claw Jack cut off his attacker, and also on some regular ol' wildlife. As they search for a way out, Jack is feeling the effects of the scratches: he's erratic, his senses are kicked up a notch. He's...changing. In one of the few cool touches of the movie, his pupils take on a star-like shape. Kathryn gets it: he's changing into one of the creatures. They aren't simply evolved monsters. They're the previous expedition! "How?" you ask, so anxiously I can sense it. Simple: it's the parasite. It mutates living things to adapt rapidly to living in any environment. Wow, I hope these things don't get out of their WELL LIT home.

On their way down a keen water slide to another underwater lake, Dr. Nicolai gets hung up on some rocks. The guy can't even body surf down a water slide, for crying out loud. He's like some kid getting stuck on the carpet slide at the local fair. Two things I kept waiting for during the water slide scene: a sad trombone for Dr. Nicolai and One-Eyed Willie's ship from The Goonies at the bottom. I was deprived of both.

Nicolai finally tumbles to the bottom somehow, and is immediately set on by a demon-thing with a tattoo, confirming that this is the expedition from the beginning. Jack tries to save him, but to no avail. They get to dry land and decide the best way out is up a sheer cliff. The team's not trusting Jack since he's acting a bit too dodgy. Charlie takes it upon herself to climb since she is, after all, the best climber of the bunch. 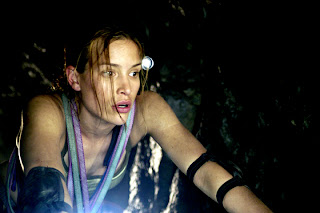 
At the top, she encounters one of the creatures and it attacks, but she manages to tumble out and down before saving herself. In one of the more badass scenes of the movie - and not because of my obvious Piper Perabo bias - Charlie makes like Batgirl and holds her own against the flying monstrosity. She even manages to set it on fire, but only at the cost of her own life. What? I was outraged - how dare they do...then I realized it was a movie, and paused it so I could get a Pepsi.

Charlie's death pisses off the team, and the trust in Jack is split. Jack, Tyler, and Top head off to find a sure way out. They gracefully (sarcasm intended) make their way down an ice vein which leads to a room full of methane fire fountains and sharp rocks. It looks like Hell, so I think this was supposed to be symbolism, but I can't be sure. An attempt at symbolism, maybe. The rest of the team joins them, sort of. Briggs is captured and impaled on some rocks while Kathryn and Alex make it to the methane fart cave. During the final battle, Alex is caught and eaten but we know he'll be back on February 2 with the season premiere of "Lost" on ABC. Check your local listings.

In order to help the others get out, Jack climbs a rock column to retrieve a rebreather the creatures stole. He's pretty far gone at this point, but manages to hold off the creatures while the others escape. Tyler, Top, and Kathryn are the only ones to make it back out into the fresh air.

Cut forward a few days, I guess, it's not really clear. Kathryn warns Tyler that the parasite may not just adapt to underground life, but life anywhere. She smooches Tyler, then reveals that her eyes have that same star pattern Jack's had. When realization hits Tyler, he pursues her, but Kathryn disappears into the crowd. The film ended, and I felt nothing.

That was the problem: I felt nothing. With the recent slew of beautifully intense films, this film was just the opposite. Never once did I feel that sense of claustrophobic dread of being trapped underground. The caves were too spacious and too...sing it with me...WELL LIT. There is no sunlight down there, and how are their flashlights and flares so able to create such a romantic ambiance? It should look like the geological version of [REC] down there. The tunnel scene in Frontier(s) was infinitely more intense and frightening than anything in The Cave. The dialogue and script was so minimal and straightforward, it allowed for little emotion and too much deadpanning of language. People should be freaking out, but there was an abundance of macho posturing. It wasn't intense, it wasn't scary, and I wasn't convinced I should care.

That said, I didn't hate this movie. Really, I didn't. It was just very easy to pull a Mystery Science Theater 3000 with this one, and I'm sure it won't be the last. Maybe next time I expect one to be not quite as good as others, I'll live-Tweet it. Could be fun if people want to read that.

Thanks for reading, and to those voting my blog up and following this blog on Google, I'm glad you're along for the ride and a big thanks for the support. You make it fun.

OK, back to the shelter - remember, that hungry, gnawing thing outside your door isn't who you think it is anymore.
Posted by Dod at 10:34 PM