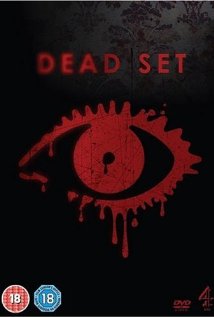 I must admit:  I'm not that big of a fan of most reality shows.  They used to be interesting, like The Real World when it first started out.  Occasionally, there are still some that might catch my eye.  I'm sure through law of averages that at least a few will slip through that really aren't that bad - hell, there are a million of these shows anyway.  In the glut of these things, there are bound to be some OK to decent ones.  But for me, they're mostly not my cup of tea.  Pretty soon, the most mundane events will have drama-soaked reality shows:  "next week, on Watching Paint Dry."  And don't get me started on the "famous for being famous" shows.

You know what these programs really need?

Lots and lots of zombies.

Thank you, my dear United Kingdom, for granting my wish.  In 2008, Britain's E4 channel aired a five-episode miniseries called Dead Set, and despite the glut of zombie media these days (yes, the irony of my own statements is not lost on me), it offered a hyperkinetic, no-holds-barred take on the living dead genre.  These are zombies of the "spry" variety, sporting characteristics such as colorless eyes and low, dog-like growls.  We can debate the pros and cons of fast and slow zombies all day long, but for me, it's a moot point.  The story is what I want to click, to strike chords with me.  Dead Set definitely struck a chord.

Why the reality show reference?  The whole setting for Dead Set is the Big Brother UK house (or a reasonable facsimile thereof) on a night when one of the contestants is being evicted.  There are blatant nods to the nature of modern reality shows and how rabid the fans are.  You know it's coming:  Big Brother fans in the live audience + a fast-acting zombie plague = wacky fun.

It's eviction night on Big Brother UK, and airheaded Pippa (Kathleen McDermott) is about to take the elimination walk outside with the massive cheering crowds and an interview with host Davina (Davina McCall as herself).  The show itself is in danger of being bumped for news of riots breaking out all over England, riots that include people attacking one another.  Producer Patrick (Andy Nyman), a vain, mean-spirited fellow, cares only about stirring things up in the house and resulting ratings.  Production runner Kelly (Jaime Winstone) juggles her job, her real boyfriend Riq (Riz Ahmed), and flirtations from a co-worker.  In the house itself are a wide variety of personalities:  sassy Angel (Chizzy Akudolu), ladies' man Marky (Warren Brown), sexpot Veronica (Beth Cordingly), lonely older man Joplin (Kevin Eldon), peacemaker Space (Adam Deacon), and wildly flamboyant Grayson (Raj Ghatak). 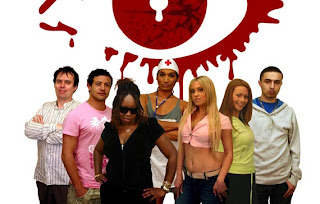 They have no clue what's about to happen when the show employees who drive Pippa's mother to the festivities come across a bloody accident scene.  When they finally arrive at the show in what I thought was a wonderfully-filmed scene, all hell breaks loose in one of the best "zombies overrunning a location" scenes I've viewed in a while.  After that initial "ka-pow!" the survivors try to assess the situation, but humans being humans, that isn't as easy or as comforting as it sounds.

Patrick and Pippa are trapped together in the green room, and that often-discussed point about bathroom privileges when stranded during a zombie apocalypse are addressed.  While Patrick is often played for dark laughs, he's truly a vile individual.  Riq and another survivor on the outside, Alex (Liz May Brice), discover that the feed of Big Brother is still being broadcast.  Riq sees Kelly and sets out on a quest to save her.  In the house, the contestants don't even know what's happened until Kelly arrives.  Angel's bitten and quarantined to the greenhouse with her best friend Grayson, a male nurse, tending to her.  Joplin has eyes for Veronica, despite being much older and nicknamed "Gollum" for his appearance.  Veronica usually sleeps with Marky, but all bets are off now.

Much like an episode of Big Brother, alliances form and trust breaks down.  All the while, outside the house and the gates, the living dead gather.  One brilliant scene catches them hurrying down a sloped street to gather at the gates, much like they did when alive.  Things really come to a head when the disagreements between Kelly and Patrick take a turn for the tragic and everything just crumbles down around everyone.  As usual, I won't spoil certain moments, including the ending, but let's just say it doesn't end well for a lot of people.  For you symbolism fans, the last shot of the entire series is of an average zombie standing in front of a store TV, staring blankly at what happens on the screen. 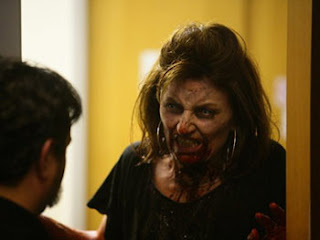 Dead Set was good, bleak fun.  If you're looking for laughs or an inspired ending with characters looking off hopefully into the sunset, you've come to the wrong place.  Everything and everyone is fraying at the edges, dark and desperate.  The acting is tremendous with spots of urgency and frustration and a very loose grip on reality.  For me, the two standouts were Andy Nyman as Patrick and Jaime Winstone as Kelly.  Not to diminish the others, but those two really stood out as intense characters with whom you could relate.  Yeah, Patrick was a sociopathic boor, but everything he did fit in his character.  He wanted out, and he didn't care who he had to roll over to get there.  Kelly struggled with an old boyfriend, a new crush, a jealous manager, a jerk of a boss, as well as several frustrating wannabe celebrities all swirling around in a fast-paced zombie apocalypse.  And she ended up becoming a leader on top of all that.

There were some sweet nods to past zombie classics with the phrase "They're coming to get you, Barbara" uttered at one point, and paraphrasing of the great line in Dawn of the Dead about "this place being important to them."  One character even dies much in the same way Rhodes does in Day of the Dead, yelling defiantly at the creatures eating him.  Not to mention, there were some standout scenes that really hit home:  the car full of freshly-turned zombies arriving at the house, the frantic overrunning of the studio, the horde of zombies converging on the fence, and the dark ending where you just say, "Aw, no."

Dead Set might not be easy to find in the United States.  IFC showed the episodes around Halloween, and I caught them on IFC's on-demand channel, where they were available for a very short time.  Amazon has each episode on pay-per-view here.  It's worth the close to $10 you'd have to pay for the whole series ($1.99 per episode).

In the meantime, take a look at the trailer and see if it strikes your fancy.
Posted by Dod at 2:25 PM