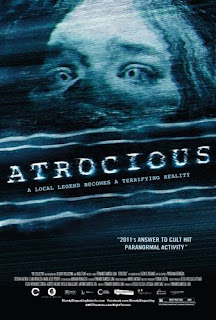 I really wanted to love Atrocious.

Honestly.  Instead, I just kind of liked it.  It built itself a nice little foundation.  You know, like in baseball, a really good windup.  Then the pitch just sailed in at a nice velocity, but was a little flat.

Atrocious, the Spanish film written and directed by Fernando Berreda Luna, is a found-footage style film (an increasingly popular subgenre) set in the Spanish countryside concerning a family that has been found horribly murdered.  When the viewer begins the film, it's as if they're part of the investigative team reviewing the evidence.  A jarring sudden rewind flashes some telltale near-subliminal images until it starts at the beginning. 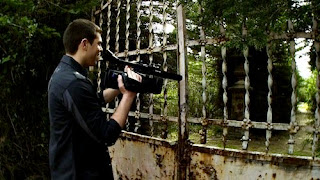 The Quintanilla family heads to their old country home for the first time in a very long time, and siblings Christian and July intend to film the entire thing for their online paranormal investigation webcast.  They're specifically excited about a local urban legend about the ghost of a girl named Melinda.  Christian insists on filming everything while July joins him in exploring the creepy labyrinth outside the house.  Soon after opening a locked basement, where they find old family artifacts, including an old TV and tons of old VHS tapes (including some Dario Argento selections), things get spooky.  Strange sounds at night seem only a little odd, but then the beloved family dog disappears.  Events take a turn for the frightening when they find the poor thing dead at the bottom of a well in the labyrinth.  The ol' family vacation ain't what it used to be.  The climactic scene finds the youngest brother missing and a frantic mother desperate to find him...in the dark labyrinth.  The father and the family friend are conspicuously absent, but the resulting stumble through the dark with Christian's camera is jarring and ultimately reveals an ending you might not see coming. 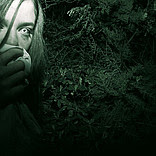 I wish the ending hadn't fallen short of what I was expecting (or rather, hoping for), but that's not to say it wasn't decent.  Maybe you, loyal readers, will get more out of it.  The tension leading up through the entire movie was very well played out, to where we didn't really know what would be in front of the camera at any given time.  But I think the movie got caught up in the atmosphere and somewhat, I don't know, lost itself.  I wasn't blown away by the ending, instead saying "oh" out loud.

But I will say this:  the ratcheted-up tension built at a really good pace.  You really do end up wringing your hands over what you think might happen, and that's good by me.  I just wish I hadn't felt so "meh" as it came to a close.  Anyway, judge for yourself.

It appears that found footage (or first-person, or cinema verite, whichever term you please) is a subgenre here to stay.  I'm mostly good with it, although for every Trollhunter or [REC], there might be a Monster.  Thankfully, Atrocious, for all its faults, isn't lumped in with the latter.  Keep an eye out, fellow zombie apocalypse survivors, as I'll have more found footage film review on the way.

For now, have a gander at the trailer for Atrocious: