Grave Encounters (2011) This Would Make A Great Haunted House Attraction 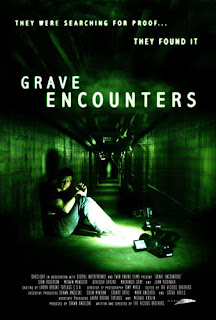 You know those haunted house attractions that pop up everywhere during the Halloween season?  Some are hokey, many are extremely creative.  Through my entire viewing of The Vicious Brothers' Grave Encounters, I kept thinking how sweet it would be if they could parlay the film into an actual haunted house one could brave on a crisp autumn evening.  I also kept thinking about how well the filmmakers skewered "reality ghost hunter" series as fame- and ratings-seekers.  Only in Grave Encounters, the question is asked, "what if one of those shows actually finds something?"

Continuing my unofficial "found footage month" here at the Helicopter, Grave Encounters slides right in as an entry in that genre, as nearly the entire film is told through footage that was "found" at an abandoned insane asylum and, as a concerned television executive tells us in the few moments that are not in first-person, "altered in any way."  Although this subgenre is starting to saturate the market just a tad, I'm still interested in it.  Although I had slightly lower expectations for this film, I was pleasantly surprised at how fun it was. 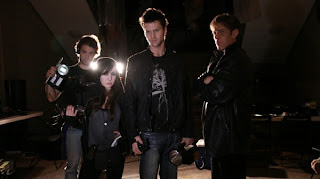 Written and directed by the awesomely-named Vicious Brothers (Colin Minihan and Stuart Ortiz), the film sets us up with premise that a film crew producing the latest episode of a ghost-hunting reality show called - as you may guess - "Grave Encounters."  An executive lets us know in documentary format that the crew has disappeared and what we're about to watch is an edited, yet undoctored account of what happened to them.  We then meet the leader of the team, Lance (Sean Rogerson) who bears an uncanny...hell, an obvious resemblance to that spiked-hair muscle guy on "Ghost Adventures."  His mannerisms in front of the camera had me laughing since I'm so entertained by the antics of the real show, it seemed like a parody-homage.  To investigate the supposedly haunted asylum, he brings his team of camera man T.C. (Merwin Mondesir), occult expert Sasha (Ashleigh Gryzko), tech guy Matt (Juan Riedinger), and psychic Houston (Mackenzie Gray).  Early on, the on-camera facades drop and we see that Lance and his team hardly believe in the paranormal - the whole thing is about ratings and of course, money.  Lance is obsessed with the show being successful, and Houston is hardly a real psychic, just an actor who complains that the overnight taping session might cut into his auditions.  They even pose like a hip paranormal investigation team.  They're ready-made for fame.

But strange things begin to happen over the night, at first nothing overly alarming.  But when Matt goes upstairs to investigate a window that moved during the night, it kicks off something that ranges from mysterious (his disappearance) to the terrifyingly surreal (what the team finds when they finally open the front doors).  Although they're not locked in anymore, they can't leave.  The asylum itself becomes an antagonist.  Maps and directions mean nothing.  Doesn't matter that their clocks say it's daytime...outside the windows, it's still dark.  Horrifying apparitions appear and the party is separated in the pitch black.  One by one, the crew is picked off in chilling ways.  I won't spoil how they go down, but I will say I found T.C.'s fate especially creepy.  Eventually, it's down to just Lance, exhausted and alone.  At the end of his rope, it's as if the asylum allows him to glimpse answers to long-standing questions about the nefarious doctor who likely created the restless spirits before handing him over to his doom. 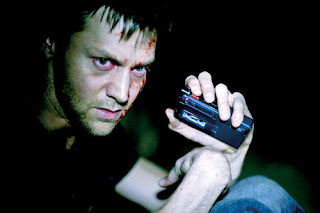 Unlike Skew, the found footage film I reviewed recently, Grave Encounters isn't deeply layered.  There's no symbolism or puzzles you need to solve, not even a breathtaking final shot to nestle itself in your brain.  Grave Encounters is straightforward and wild, a walk through a haunted house not unlike some of the better Halloween attractions out there.  It's not fancy, but it manages to hold the interest and entertain with no small amount of flair and nods to a slew of urban legends.  Rogerson is excellent as the central character, and his Lance is intense, brash, and slightly unlikeable.  He demands his crew follow him, even when things get insane.  One standout for me was Gray as Houston, the over-dramatic, cowardly psychic.  He's so over-the-top when he's "on camera" for the show, displaying his "powers," but a fame-seeking diva when he's not.  I found him to be both hysterical and interesting by playing both sides of that coin.

Overall, the film is a lot of fun, not nearly as bad as I thought it might be...don't ask me why I thought it would be bad.  I guess I thought I was due for a dud, but I was happy to find I really enjoyed Grave Encounters.

So give it a try, and you'll see what I mean:  making this a haunted house tourist attraction would be money in the bank. Charge admission at the door, gift shop on the way out. Money, I tell you.