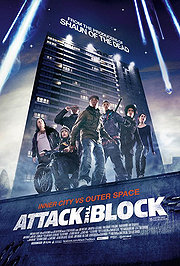 It always comes back to Spaced.

Longtime readers of my blog know of my love for that British television series, which starred Simon Pegg, Nick Frost, and Jessica Stevenson, directed by Edgar Wright, and co-produced by Nira Park.  I always seem to find a way to connect it to something...that is when I'm not watching it for the fiftieth time.

Along comes the little British sci-fi/action/horror flick Attack The Block, and sure enough, it stars Frost, is co-produced by Park, and executive produced by Wright.

There was a lot of buzz surrounding Attack The Block, with a lot of voices proclaiming its excellence.  It kind of snuck up on me, so I was quite happy when I realized I could get a hold of it sooner than later.  The premise looked unique enough to catch my eye:  aliens invade an inner city housing project only to meet resistance from the local ruffians.  That may sum it up, but it was definitely a richer experience than just those words. 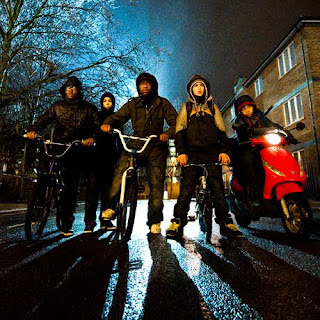 During Guy Fawkes Night, young nurse Sam is mugged on her way home by a bunch of kids, who are threatening despite their obviously young age.  They're interrupted by a meteor-like object crashing into a nearby car, where they discover a mean little creature that scratches the leader Moses before running off.  The gang finds the creature hiding in a shed and proceeds to beat it to death.  Taking it to the local weed dealer Ron (Frost), they're full of piss and vinegar when Moses gets promoted by the block's head drug dealer Hi-Hatz.  They go out in search of more aliens to beat up on, but run into bigger, meaner, and toothier versions of the one they killed.  Not only that, they get pinched by a couple policeman on a tip from Sam.  Soon, Moses and his gang and Sam are forced to team up as the creatures descend on the block, killing anyone associated with the gang.  Hi-Hatz thinks Moses betrays him, so he sets out after him, too.  The deadly serious Moses steels himself, realizing it's up to him to protect his gang, protect Sam, and defeat the aliens.  There are a few interesting twists and a satisfying ending that redefines heroism within the context of the movie. 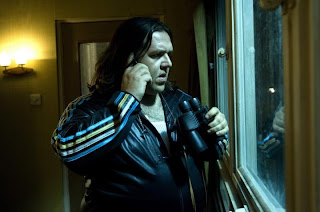 Even with the presence of Nick Frost and a funny performance from Luke Treadaway as Brewis, a drug customer who just wants to be seen as cool, Attack The Block isn't really a comedy.  The presence of aliens speaks to a science fiction genre, and the violence and suspense are earmarks of horror.  Like I wrote before, I see it as a sci-fi/action/horror movie with a coming-of-age flavor - it's non-stop with some pretty frightening alien juggernauts that are all black fur and teeth.  Rows and rows of glow-in-the-dark teeth.  The performances are genuine, and the street slang spoken by the kids ends up not distracting the viewer, even if the person watching didn't grow up in South London, where the film takes place.  While there are a few chuckles, they're usually nervous ones as the characters are scared.  When you see these aliens in action, who wouldn't be?

Attack The Block was definitely a fun little film, great for late-night viewing.  Even though the kids are junior criminals, you're guaranteed to root for them as the film progresses.  The monsters are of a simple design, but it absolutely works, as does the reason why they're focusing on the gang.  You could do a lot worse if you need some good entertainment.

Now I'll go watch Spaced again, while you check out the trailer for Attack The Block. Enjoy, and watch the skies...