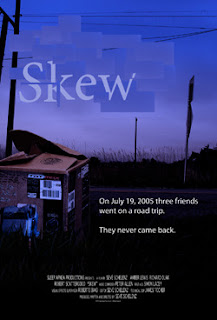 Skew had me thinking.  Not just during the movie, which is always a positive, but after.  Long after.  It made me think about everything I saw during the course of the film and every line of dialogue.  It especially made me think about a final scene enough that I went back and watched the final few minutes over again.  The final frame froze me in my tracks.  Figuratively, of course. I don't usually pace around the room when I watch movies.

The last found footage/cinema vertite/first person film to make me formulate ideas and theories long after I shut it down was The Last Exorcism, which I enjoyed more after I watched it as well.  My theories may not be right, but it's fun to think them up.  The last shot in Skew is a game-changer.  It made me go back over everything I had just seen and re-think all of it.  It's chilling and exciting at the same time.  Like a goofball fawning over a double rainbow, I felt like laugh-shouting, "What does it MEAN?" 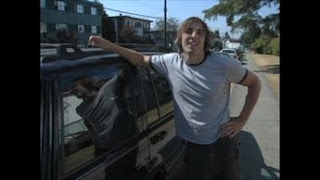 Basically, Skew is a story told from one point of view, first-person-style.  It's deftly written and directed by Sevé Schelenz about three friends on a road trip.  Some movies could tell a story with just that, but Schelenz goes much further.  Simon (Robert Scattergood) wants to document the entire trip to a friend's wedding with his spankin' new camcorder.  Buddies Rich (Richard Olak) and Eva (Amber Lewis) pick him up but there's already tension because Simon has just had a fight with his girlfriend Laura (Taneal Cutting).  Eva goes inside to convince Laura to go anyway, but is given the cold shoulder.  The three head out on the road and after some friendly shenanigans and typical road trip fun, strange things begin to happen.  Hey, you knew they would.  It starts when they hit a coyote on the road, then check in to a local motel.  Simon films the desk clerk and finds his face distorted and twisted.  Later that night, the clerk is found dead and police are everywhere.  But it doesn't stop there. 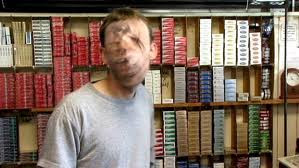 An entire bus full of tourists winds up dead after being filmed through Simon's lens, and the weirdness is just getting started.  Terrifying things happen.  Tensions flare.  Nerves are stretched thin.  Visions intrude (but only for Simon).  Secrets are confessed, one of which brings friends closer, another which tears them apart.  It all comes to a head, and when the final few minutes finally air, we get some answers and one huge reveal that might give you more questions to ponder.

And my friends, sometimes that ain't all bad.

Sometimes I like being left with a few questions partially answered...or not answered at all.  It's good exercise for the brainpan to be given some slack to dance around the information it's been given, see it from different angles.  Too often, audiences are spoon-fed the answers and soon grow to demand it.  Look at some (some, I say) of the frustration with the TV show, Lost.  Answers were deliberately held back, but there were those who got angry because every little detail wasn't revealed.  But I digress.

Skew wasn't without a couple faults, the way I saw it.  I understand and very much appreciate the importance of a slow build, but there were a few spots where dialogue and non-action felt a touch snail-like.  But I'm definitely willing to look past those slow spots because the acting was very good, very genuine.  It's hard to pick out a single star, and I have to hand it to Scattergood for basically what amounts to voice acting, as it is through his perspective that we see the film.  Olak is a study in a breakdown as he goes from jaunty slacker-ish guy to hard-drinking angry friend on the verge of blowing his top.  Lewis is the voice of reason, the almost angelic one that everyone loves.  She tries so hard to keep the three together with so much going on behind her eyes.  The script is natural and flowing, and the direction is tight, especially during the scenes of mounting tension or utter creepiness.  I'm not alone in looking forward to Schelenz' next body of work.

Give yourself some time and have a gander at Skew.  It's a fine entry in the current "found footage craze," even though it's technically a forerunner, since it was actually filmed in 2005.  It doesn't have the frantic craziness of, say, a [REC], but for genuine creeps and chills, it makes a damn strong case for itself.

Now here, take a look at the trailer if you like. *warning: some language and possible spoiler-ish stuff*