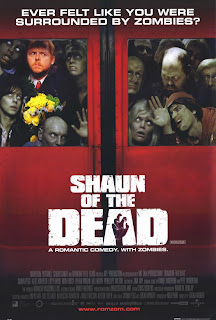 It's about time I reviewed this.

Shaun of the Dead, the British romantic zombie comedy (or "rom-zom-com"), easily ranks in my top ten of not just horror movies but my top ten in comedies and my all-time top ten.  It is the measuring stick to which I hold any horror-related comedy, the gold standard for "yucks and yuks."  I have no idea why I haven't gotten around to discussing it here but now's the time, and this is the month.  More reviews like this are comings, my "Why Haven't I Reviewed This Earlier?" series, you could say.

Right.  Now, as anyone who reads my blog knows, I like films with energy.  Something that tells me some real effort, some real passion was infused into the making of the film.  Even if the film isn't all that great, I can appreciate the amount of energy it exudes.  Well, this movie has energy in bundles.  Directed by Edgar Wright (who recently brought us Scott Pilgrim Vs. The World, and shares writing credits here with star Simon Pegg), the film dashes and leaps, sizzles and pops, shakes you up and buys you a pint before dancing on your table.

Shaun (Pegg) is having a rough day.  His girlfriend Liz (Kate Ashfield) has had enough of his lack of ambition, and breaks up with him at the urging of her two friends Diane (Lucy Davis) and David (Dylan Moran).  He is at odds with his stepfather Philip (Bill Nighy) which makes visits with his beloved mother Barbara (Penelope Wilton) quite uncomfortable.  The presence of his drug-dealing, ne'er-do-well best friend Ed (Nick Frost) angers his roommate Pete (Peter Serafinowicz).  One morning, the end of the world arrives as the recently dead begin rising and dining on the living.  Once they realize what's happened, which takes a while after being severely hung over, Shaun and Ed devise a plan to rescue Barbara and Liz, then hole up until the crisis passes at their beloved pub, The Winchester.  Things obviously don't go to plan.  Philip, already bitten, dies and revives, causing them to ditch the car and go on foot to the surrounded Winchester.  Keep an eye out for when Shaun and his group run into his old friend Yvonne (Jessica Stevenson, the co-creator of Spaced with Wright and Pegg) and her group.  Once at The Winchester, the group falls apart.  Barbara is bitten, Liz and Shaun try to work things out, and David is vocal about his doubt, mostly because he carries a torch for Liz.  However, we witness the confidence Shaun grows when placed in the role of leader.  He rises to the occasion, even when things get bad during the climax of the movie.  Still, without spoiling it for the few who haven't seen it, I will just say the movie ends on a chipper high note with a fitting end theme song.

Shaun of the Dead, to me, is - to quote Pegg's Shaun - a slice of fried gold.  Impeccably paced, with scores of references to classic zombie films peppered throughout, it never stops moving.  Musical cues, nods to zombie film actors (Shaun works for Foree Electric, named after Dawn of the Dead's Ken Foree) lines of dialogue ("We're coming to get you, Barbara!"), and the slow-walking zombies themselves are all part of the love letter to the classics of our culture, especially the films of George A. Romero.  There are so many references, so many of those nods, I can only direct you to IMDB's trivia page for the movie.  The acting is top-notch, with the obvious chemistry between Pegg and Frost as best friends in the movie, as they are in real life.  They even reprise a line from their Spaced series that sums up their relationship with the "thanks, babe" exchange.  The first in the "Cornetto Trilogy" (spot the Cornetto ice cream product), Shaun of the Dead serves as the first motion picture to build on the Spaced legacy.  They are absolutely linked which is one of the reasons I'm mentioning the sitcom so much.  That, and I just love it to bits. 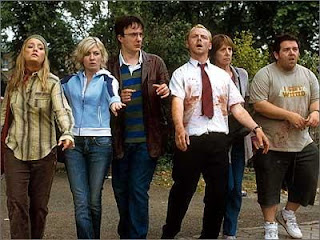 Some time ago, I wrote a review of an episode of my favorite British sitcom, Spaced, during which the lead character Tim (played by Pegg) hallucinates seeing zombies thanks to staying up all night on cheap speed, eating Twiglets, and playing Resident Evil 2.  That hilarious bit during the television show gave Pegg and Wright some of the inspiration for Shaun of the Dead.  That series, and this movie, are huge breaths of fresh air - often imitated, never duplicated.  They're what's right in entertainment.

There have been some wonderful recent additions to the horror-comedy subgenre:  Zombieland and Tucker and Dale Vs. Evil come immediately to mind.  But Shaun of the Dead is my gold standard.  If you haven't seen it, please...do yourself an immense favor.  I can only gush so much about it before telling you go out in the world and give your eyes a treat.

Here, to give you a little...taste...the trailer:

Email ThisBlogThis!Share to TwitterShare to FacebookShare to Pinterest
Labels: 2004, best of the best, comedy, england, zombies