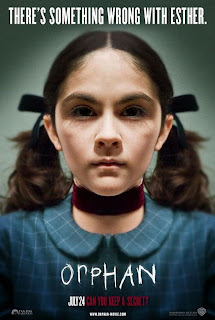 Probably a good idea to add Isabelle Fuhrman of Orphan to that list of utterly creepy kids in film.

While I was mostly give or take with the film itself, Fuhrman's performance as the titular character, named Esther, was a definite standout. It's a lot to put on the shoulders of a child, but if the theme of the movie is "crazy batshit evil kid," it's expected that the best performance should come from said youngster. Those other actors I mentioned, think about it: you remember them. They carried those movies, and made it look easy. Same with little Miss Fuhrman.

As the story goes, John and Kate Coleman (Peter Sarsgaard and Vera Farmiga) are ready to adopt a child after the horrible loss of their youngest child during labor. They already have two children, grumpy pre-teen Danny (Jimmy Bennett) and cute Max (Aryana Engineer), who is also deaf. Through the magic of exposition, we discover that the Coleman family is a flawed family. John apparently cheated on Kate, and Kate herself is a recovering alcoholic. The nightmare Kate has at the beginning tells us about the pain the death of their unborn child caused.

So once John and Kate...wait...John...Kate...plus...naaaah. I'm not going there. Anyway, once John and Kate are approved to adopt, they hit up the local orphanage to scout out the rugrat talent. Who will step up and be perfect kid number three? It isn't long before they're charmed by 9-year-old Esther, a precocious (and I do loathe that word, mind you) little girl hailing from Russia. She says all the right things, paints really well, and seems like the perfect child for sure.

Yeah, right.
It doesn't take long for Esther to start her mind games. She's got some pretty glaring quirks to work through as well, including but not limited to the following:
She's also a hell of a manipulator, zeroing in on the family's weaknesses with little - almost practiced - effort. Most of her evil seems to be focused on Kate with an unusual case of "adopted Electra complex." The "unusual" comes with the twist later in the movie. Esther takes steps to alienate Kate and intimidate the other kids.

She's forward-thinking enough that she knows cutting Kate's orchids - which were dedicated to her stillborn daughter - will send Kate into a frenzy. To add to the effect of her arm being grabbed, Esther puts her own arm in a vice and breaks it. That's dedication to one's craft.

Kate feels insane. She's the only one who seems to notice that something is off about Esther. "Off" is putting it nicely. Esther has the kids so frightened of her, they won't tell. Max witnesses her murdering Sister Abigail (the great CCH Pounder). Esther puts a knife to Danny's twig and berries, threatening to do some pruning if he ever crosses her. No, Kate's not the one who's insane.

In the midst of uncovering Esther's past, Esther nearly kills Danny twice for organizing a mini-uprising with Max: once by setting the treehouse on fire and causing Danny to fall, and once by smothering him with a pillow. Kate lashes out, but is subdued. This leaves Max with her grandmother, Danny barely hanging on to life in the hospital, and Esther...gulp...with John at home.

Now, here's where it gets creepy and somewhat divisive among horror fans. There's no denying that Esther is one creepy chick. What kind of creepy chick is part of the twist that has some fans cheering and others booing.

The twist? Scroll over this to see the spoiler-y words: Esther is actually a 33-year-old woman with hypopituitarism which stunts her growth - in addition, she is also batshit INSANE.

The final showdown between Esther and the Coleman family isn't without some tragedy and some laying down of the smack, and I don't think there'll be a sequel. At least, and this is spoiler material, not with Esther anyway.

I asked quite a few people what they thought of it, and I read some opinions here and there. While not as polarizing as Rob Zombie's Halloween 2, I saw and heard a lot of "oh, I loved it" and "oh, I hated it." Very few stood in the middle. The twist was admittedly a strange kind of deus ex machina, but I didn't have as much trouble with it as I imagined I would. The film looks good, has decent pacing, and is carried by very strong performances from Vera Farmiga and Isabelle Fuhrman. One of the basics of writing a story where it's one entity versus another is that those two parts should be the strongest foundation of building said story. The antagonist and the protagonist should at least appear strong, and in this case, that held up.

So, yeah, Orphan...not great, but definitely not bad. Check it out and form your own opinion.

Until next time, remember, we all have to get along in these shelters, so keep those insane urges to draw inappropriate scenes on your wall that can only be viewed with a black light in check.