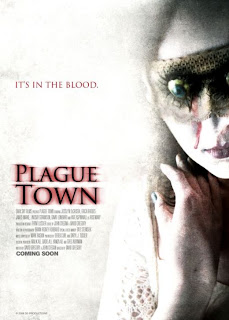 In the world of horror, if someone has some real estate they call "rustic," you might want to reconsider what that word means. For this reality, it might mean a beautiful, ancient home or a quaint village, but open the doors and you'll find deformed mutants whose nighttime games include torture and sadism. Oh, and the villagers aren't much help either. So go ahead and try to sell me "rustic" in a horror world. I'll stay in my zombie- and evil mutant child-proof shelter, thank you very much.

Plague Town is a neat little creeper penned by John Cregan and David Gregory, and directed by Gregory, about an unhappy family (plus one cheeky British hanger-on) getting caught in the backwoods of Ireland and stumbling upon the residents of the title town. Sounds pretty straightforward and The Hills Have Eyes-ish, doesn't it? Yeah, it's pretty similar in tone to that early Wes Craven offering, but Plague Town stands well on its own.

In a prologue, we see that this unnamed town has had some kind of curse on it that causes its newborns to be deformed, ugly little mutants. A priest declares that the children must die as they're born, but one father stands up and murders the priest, declaring the children will live.

Jumping into the story proper, in a largely unsuccessful family bonding outing to Ireland, father Jerry (David Lombard), fiancee Annette (Lindsay Goranson - who looks like a younger Sigourney Weaver to me), mouthy oldest daughter Jessica (Erica Rhodes), brooding younger sister Molly (Josslyn DeCrosta), and aforementioned cheeky British hanger-on Robin (James Warke) leave a tour bus to explore the countryside, but not without having sniping family battles. Jess and Robin wander off to make out somewhere and cause the family to miss the bus. Solution? You guessed it. Find the nearest sign of civilization and call for help. Yeah, that always works. 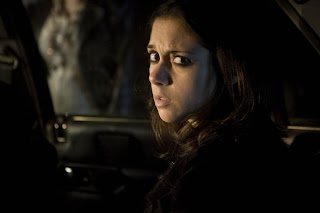 Wandering down an old road, the group stumbles onto an abandoned French car, but not after Molly sees a grinning face leering out of the woods like the Joker saying a quick hello. The family takes shelter in the car. Robin decides to swagger off to look for help, and Jess runs off to catch up with him. They hear laughing and discover a quaint little home, empty when they enter. After almost engaging in a game of Slap and Tickle, they hear sounds and investigate, finding a strange farmer who makes odd advances at Jess. When Robin tries to defend her, the farmer shoots Robin in the face. Jess runs and hides in the woods.

Hearing the gunshot, dad Jerry storms off into the foggy night to look for his daughter. Instead, he finds the same quaint little home, now occupied by two giggling, freakish little girls who like to play games. Creepy games with sharp objects. Oh, and piano wire, which leads to a pretty impressive little death scene when they wrap the wire around Jerry's head and...well, Jerry flips his lid. Heh. Yeah, just kick me now.

Back at the car, Molly and Annette hear strange noises, but refuse to go off into the woods. Pretty good idea for the time being, but short-lived. Several mutant children viciously attack them. In one of the more disturbing scenes, one of the children bludgeons Annette into oblivion (read: in the face) with a hubcap. Molly escapes and tears off into the woods.

In the meantime, Robin is somehow still alive with a massive wound to the face. A woman finds him and takes him back to her home so he can meet "Rosemary," her grandmother. The old lady makes strange allusions that Robin can't leave and that he's meant to meet Rosemary. Oh, and he does. She's a sprightly young thing and as evil mutant girls with the intent to mate and kill go, she's fairly hot. She also has no eyes, save for the fake ones attached to the lace mask on her face. When Robin rejects her, wanting to go get help, they decide he's not the one for her anymore. Robin barely gets away, but by then, grandma's calling in the mutant troops. 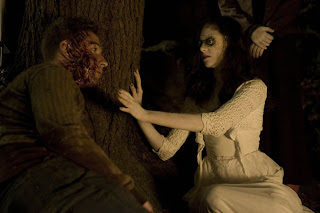 Jess, in the meantime, has been strapped to a tree and whipped with branches by the kids until they hear the old lady's alarm to flush Robin out of the woods. Two strapping young lads stay behind to play Throw The Sickle At The Girl for a while, until Molly appears and rescues her sister. Angry and scared, the girls fight back with a vengeance, slaughtering the two boys.

Eventually, Rosemary catches up with Robin, and has one of her brethren thrust a stick into his neck, finally killing him. They weave sticks into his face and eyes, then hang up him to throw objects at him. Really, rejection is not handled well in Plague Town. 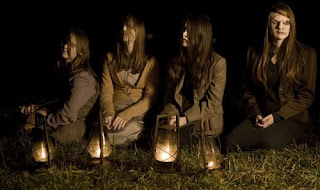 Molly and Jess work their way into town, where they find a pregnant woman who pleads with them to take her away. Jess and Molly are subdued by townsfolk, who extract blood from them, wondering if they'll be "cleansed" this time. In another daring attempt at escape, Molly, Jess, and the pregnant woman nearly make it out of town before they're overwhelmed on a bridge. When Molly awakens, she's in a room with three other young girls and a baby with no eyes. One girl is speaking French, presumably from the car found earlier. One girl explains that she's had numerous babies by the townsfolk, each a mutant. It's with this horrible realization that Molly now knows she's intended to be a brood mare, one of many in an attempt for this town to have "normal children."

Plague Town is very low-budget, but very impressive with what is done with that budget. No fancy special effects here. You get creepy lighting and reliable suspense to support the ghastly images and occasional gore. There are a few missteps with the whole thing, most notably the script. Some of the dialogue is noticeable, and not in the best way. That said, it's pretty easy to overlook the silly phrases and strange word choices - as well as some of the shaky camera work - when the creepiness and great pacing keep drawing you in, and that's fine with me. What also struck me was the wonderful score by Mark Raskin: minimal, surreal, and reminiscent of Akira Yamaoka's work on the Silent Hill games.

It's a straightforward movie, offputting and creepy at all the right moments. Give it a chance, and you may like it as well.

Hopefully, I won't land the ol' chopper in a town like this. Got enough to worry about with the undead all over the place. Take care out there, survivors, and you out there in Ireland, don't go wandering into "rustic areas" without taking an axe, or a gun, or...well, you know.