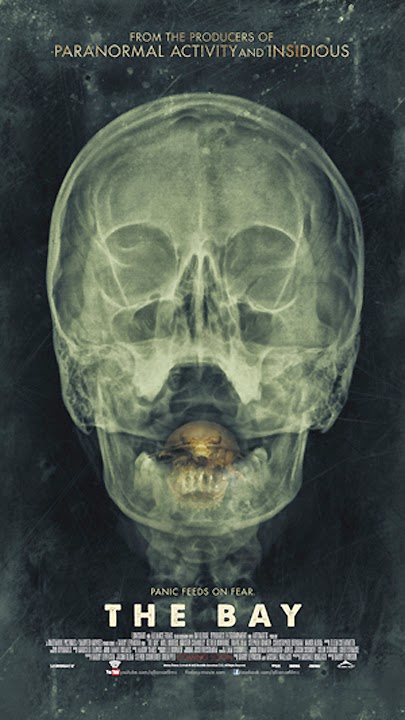 The Bay is an interesting film even before you start watching it.  Released to little fanfare, it's made in the found footage style and it's an eco-horror film directed by none other than Barry Levinson (Diner, Rain Man, Avalon).  It doesn't seem like the type of movie one would expect from Levinson, but good directors often take chances.  For the most part, he scored quite well with this increasingly creepy movie with a message. 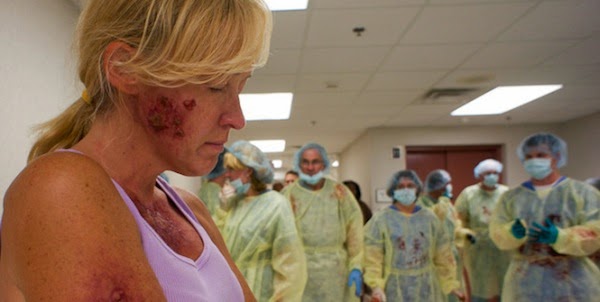 In a small, idyllic Maryland town, a celebration of its history on Chesapeake Bay brings the town together.  But there's a bit of a dark underside.  There's high levels of toxicity in the water thanks to a huge chicken processing plant and a cutting-corners filtration plant installed by the mayor to give the illusion of safety.  Two researchers know this, but are dead from a mysterious malady before they can turn in the proper proof.  Slowly, through the eyes of several security cameras, phones, news cameras, and video conferences, it's obvious that something is happening in the town.  People are getting violently sick, developing ugly sores on their bodies.  They begin to react violently or irrationally.  Then it all just goes downhill from there.  Our various emotions are toyed with as we see this horrifying epidemic unfold through a young reporter's tapes, town security cams, a young girl's iPhone, police dash cams, and the one that builds the most tension:  the video camera of a young family oblivious of what's happening taking a boat to the town.

Using a cast of talented unknowns, Levinson adds some meat to the bones of the found footage genre.  He uses some good jump scares here and there, but it's the creepy atmosphere that slowly builds over time that really made the film something good.  The town at the beginning is the town you want to live in, and the town at the end looks like something out of a Romero film.  This all happens in such a short amount of time, you wonder how anyone can get out of it or how they could possibly survive.  The tension and atmosphere are on display here. 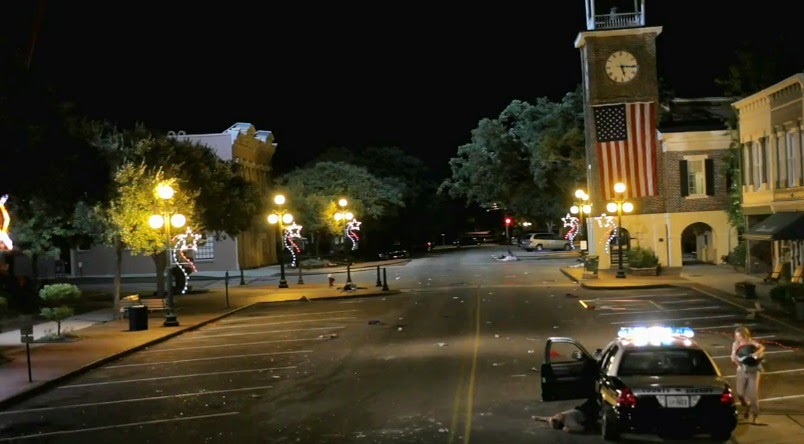 Some viewers may applaud or bemoan the message of pollution and pollution regulation that sits behind the main face of horror here.  Keep in mind:  this is just a story.  It's fiction.  It's the fictional story of a fictional situation happening to fictional people because of some other fictional situation.  Relax.  Personally, I think pollution is pretty much bad all around.  I don't want to go swimming in unfiltered chicken poop, and I certainly don't want mutant sea bugs burrowing into my skin and giving me boils the size of dinner plates.