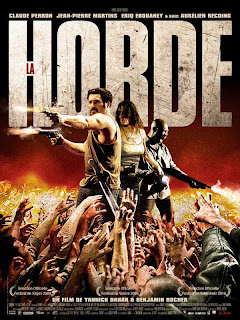 Well, that whole notion is the basis of the French zombie action film, 2009's The Horde.  Directed by Yannick Dahan and Benjamin Rocher in their feature film debut, the basic plot is pretty straightforward.  In France, a group of cops who refer to themselves as a family unit, decide to take revenge on a Nigerian drug lord who has killed one colleague, and kidnapped another.  They're on an unsanctioned mission of vengeance, quietly storming the high-rise tenement building where the drug lord is based.  The raid doesn't go well, and the police are quickly held at the mercy of the bad guys.  Within minutes, the building is under siege by the titular horde of undead.  It's happening inside, too, as the kidnapped cop revives and attacks after being shot multiple times.  The zombies themselves have the origin characteristics of early Romero undead (don't have to be bitten, just be dead to revive) and the physical attributes of the mad runners of 28 Days Later (they're hungry and fast).  What brought on this undead virus is never revealed.  The important thing is you have two groups of people who couldn't be more different throwing those differences out the window to feed their instinct for survival.  Their goal is to get out of the building and escape the horde, but you know as well as I do, that ain't happening as easy as they think.  The rest of the film is their attempt at escape, with the building, the zombies, and each other as enemies. 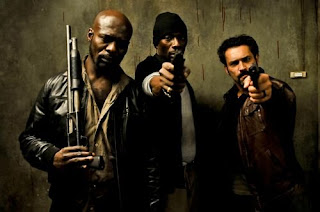 While as a whole, the movie rates as "pretty good" in my opinion, it's the parts that make up the sum that stand out to me.  The action drives the relationships, and so the focus is there, unlike most zombie films where characterization is ranked higher.  I would daresay that this is more of an action movie than a horror movie, the way I see it.  There are stretches where scenes drag on a little too long, but the action is fast and furious.  And no, Vin Diesel is not in it.  Getting back to the "parts that make up the sum" thing I mentioned, I wanted to note that there were are scenes and moments that really made those parts enjoyable.

There were a lot of hand-to-hand combat scenes between uninfected and infected.  No martial arts goodness, but some brutal "fighting for my life" kind of fisticuffs.  One hood, Greco (Jo Prestia), finds and completely destroys two zombies using his fists and a small knife.  Completely badass, but only an appetizer for a scene towards the end of the film when heroic cop Ouessem (Jean-Pierre Martins) faces off with a giant-size horde using at first two pistols, then a machete, then his fists in an increasingly-futile battle.  It's riveting and sad and insane at the same time, and really a highlight of the film. 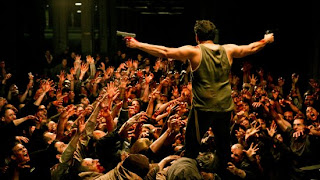 While Ouessem is a great character, for me, the most intriguing character was Adewale, the drug lord.  Eriq Ebouany portrays him with a full spectrum of emotion, from cold killer to protective brother to respectful ally.  He's smart and tough and will do anything to survive, even help his enemies.  His strength is seen on display when his hotheaded brother Bola (Doudou Masta), Greco, and a crazy old soldier they meet named Rene (Yves Pignot) - all hopped up on cocaine - contemplate sexually assaulting a wounded zombie.  While the zombie writhes on the floor and the drugged-up guys stand over her, Adewale's expression is one of horror and anger.  He shoots the zombie in the head, then angrily reminds Bola of their past in Nigeria and hints at something similar that may have happened in their younger lives.

All parts considered, I liked the movie.  The action sequences were very kinetic, the acting was quite good, and I'm going to give points to zombie movies that show a glimpse of the infection's scale in the world.  In this case, it was a dark, panoramic shot of the city burning and it's the punch in the gut to the characters that lets them know, things just got serious.

Until later, my dear readers, remember:  in a zombie apocalypse, we're all in it together.  Except for Fred Phelps and his Westboro nutjobs. I don't want them anywhere near my shelter.