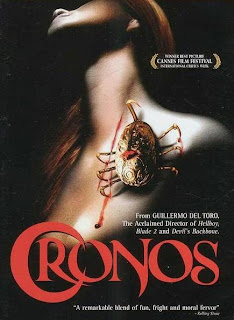 Usually with a vampire movie, you know what you're getting. Fangs, low tolerance to sunlight and garlic, possibly a stake wielded by a vampire hunter.  Sadly, in recent years, some even...sparkle.

In Guillermo Del Toro's 1993 directorial debut Cronos, however, the genre is explored from an entirely different perspective, and it's fresh and very interesting.  You may have heard of Del Toro.  He's a director-writer-producer hailing from Mexico that has put out a few little films like Hellboy, The Orphanage (which he produced), and Pan's Labyrinth, among many others.  He's known for having a unique vision and a flair for atmosphere.  Usually, when I hear his name attached to a project, I'm in...I want to see it.

I've had Cronos on my list for a long time and just felt it was time to move it up so I could see it sooner than later.  I'm glad I did.  What I discovered was an entirely different take on the vampire genre, one with entirely different set of rules, albeit with some of the tried and true cornerstones.  The focus was placed squarely on the desperation of one man to figure out what has happened to him and how it affects his close-knit family. 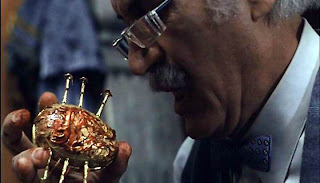 Antique dealer Jesus (Federico Luppi, a Del Toro regular) stumbles across a strange artifact among the stock that has recently arrived at his store.  Little does he know, this little Cronos Device was created over 400 years previous by a mysterious alchemist...who just died in an accident.  That's some serious Highlander stuff right there.  While handling the Cronos Device, Jesus sets off the mechanism, which injects him with some strange solution from an old insect.  His granddaughter, the adorable Aurora (Tamara Shanath), worries about him but tells no one about his strange find.  Also in pursuit of the device is the sick but devious De La Guardia (Claudio Brook), a dying millionaire who knows all about the Cronos Device and what it can do for him.  He sics his thuggish nephew Angel (Ron Perlman) after the device, first by being nice (yet creepy) then through force.  Jesus is finding out strange things about himself after exposure to the device.  He never grows fangs, but he has a slight craving for blood and a rejuvenated body.  But all for naught as Angel pushes him off of a cliff inside a car, and Jesus is set to be cremated.  But hold on...Jesus isn't done yet.  He crawls out of his own coffin and, hidden by Aurora, plans his final showdown with De La Guardia at the selfish old fart's factory/hospice room.

Like many of Del Toro's films, Cronos just flows.  It doesn't have the smoothness of a, say, Pan's Labyrinth but it was very early in his career, and it was easy to see where he was going with it.  The plot is unique:  sure, it's something of a vampire movie, but it breaks so much with tradition, it really challenges you to place it squarely in that genre without considering its other elements.  It's a beautiful family relationship film as well.  Jesus and Aurora are not only grandfather-granddaughter, they're the best of friends.  They play games in the antique store.  Aurora turns her toy chest into a makeshift coffin for him to sleep in, away from the painful rays of sunlight.  It's also a commentary on religion.  Consider the main character's name - Jesus - and the themes of resurrection throughout the film.  When discussing insects, De La Guardia makes reference to them as being "God's favorite creature," as they can display long life and a sort of resurrection in extreme cases.

The acting is nothing short of great.  Luppi is outstanding as the overwhelmed grandfather trying to do what's right.  As Aurora, Tamara Shanath only says one word of dialogue, but that's all she needs.  She communicates through her eyes, and does it well.  I can't leave out Ron Perlman's toothy, dripping-with-smarmy-evil portrayal of Angel.  You don't trust him from the minute he appears on screen, and his presence adds tension - you know he's going to do something, you're just not sure what.  He's all mouth and eyes, and it's fantastic - even though he's playing a character obsessed with the plastic surgery he's about to have on his nose. 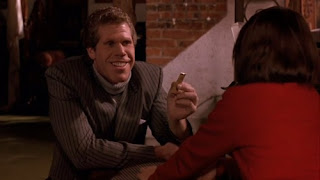 Looking for something different?  Tired of the same old vampire flicks?  Might I recommend Cronos for what ails you?  It's really a neat little film and the launching pad of one of today's finest directors.  It's not a scary film, and the tension is mostly pretty light, but it's a great story, well-acted and well-produced.

Here, enjoy the trailer (which may be a little spoiler-y in my opinion, but good enough):