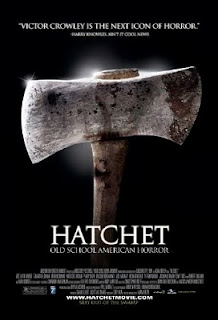 Writer/director Adam Green's Hatchet was supposed to be a return to the roots of the modern slasher, a throwback to the early days in the Friday the 13th and Halloween franchises, among others.  Victor Crowley, the monster antagonist, was supposed to join Jason and Michael in the pantheon of memorable killers of curious movie teens.  It's hard to say if that has actually happened.
Hatchet is a divisive movie.  I have horror blog colleagues that absolutely love it, and others that absolutely hate it.  There are several in between, and I think that's where I stand.  I didn't hate it by any means, but it didn't "wow" me either.  However, the attempt at bringing back that old school flavor was not only noticed, but it is to be commended.  Green brings a certain freshness to the genre, not filling the screen with wild colors and big special effects.  It's a low budget he's working with, and therein lies the energy.  And my readers know I love for a film to have energy. 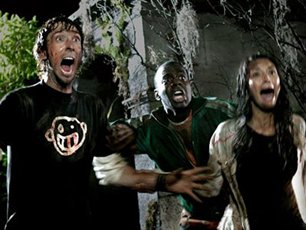 The plot is straight out of the 80's, and honestly, that's not a bad thing.  Ben (Joel David Moore of Grandma's Boy) is a sad sack whose girlfriend just broke up with him.  His friends try to cheer him up with debauchery in New Orleans, but Ben just isn't into it.  He thinks a ghost tour into the bayous might be more his speed, so he's joined by his buddy, Marcus (Deon Richmond of Not Another Teen Movie).  The original tour's guide (Tony Todd in a hilarious cameo) isn't running tours anymore, so he sends them to another guide, Shawn (Perry Shen).  The two friends join a would-be pornographer named Shapiro (Joel Murray of Mad Men), his two willing "stars" Jenna and Misty (Joleigh Fioravanti and Mercedes McNab), the jaunty Permatteos (Richard Riehle and Patrika Darbo), and a mysterious young woman named Marybeth (Tamara Feldman) as they head into the swamp.
There's a local legend about a deformed child who was accidentally killed during a fire caused by local bullies.  Seems Victor Crowley's father tried chopping down the door with a hatchet, and it hit Victor in the head.  But we know Victor is still roaming the woods and not willing to share some of that deep South hospitality.  Marybeth knows this as well, as she is searching for her lost father and brother (Robert Englund of Nightmare on Elm Street and Joshua Leonard of The Blair Witch Project), who met with a bloody end at Victor's hands in the prologue.  Shawn, who's neither a very good tour guide nor a very good boat captain, manages to sink the ship by running it into some rocks.  The tourists are stranded in Victor's woods just a stone's throw from Victor's house.
Let's just say Victor's a stickler for property boundaries. 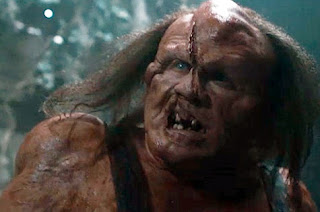 "Get off my lawn!"
The enormous Victor (Kane Hodder, who has played Jason Voorhees a million times) bursts out of the house and sets about slaughtering the tourists with such over-the-top methods as the "twist top kill" and the "Pez dispenser kill" and the "I-really-hate-your-shoulder-old-man hatchet kill."  Victor is a force of nature:  pure strength and manic energy.  He's not one for stealth.  He just comes in like a Tasmanian Devil on Red Bull and starts ripping and chopping until the final scene.
And that ending.  Yeah, I can see where it has something in common with the way the original Friday the 13th ended...sort of.  Still, if there wasn't a sequel planned, it was just a little bit too abrupt for my tastes.  Others may like it...hell, some people love it.  That's fine, but I'm just going by my own preferences here.
Hatchet was pretty good, but for me, it wasn't the new savior of retro-flavored slasher flicks.  It was pretty standard, but with a little more flair in terms of dialogue and direction.  To me, those were the strong points.  The snappy dialogue, especially coming from Deon Richmond, infused the movie with some verbal lightning.  Adam Green showed quite a bit of creativity and, yes, energy in his direction. Working extremely well with a low budget, Green is definitely paying homage to the teens-in-the-woods monster slasher.  It's straightforward and unflinching in its gore, which is so wild that you're more amused than disgusted or even scared.  It was fun, but I would hesitate to call it the movie that returned American horror to glory.  And don't think I hated it because I didn't - I thought it was pretty good, but really, that's about it in my humble opinion.
But hey, judge for yourself. All I know is, if I'm ever in New Orleans again, I'm sticking to the craziness on Bourbon Street and staying far away from the bayou ghost tours.
Posted by Dod at 6:10 PM