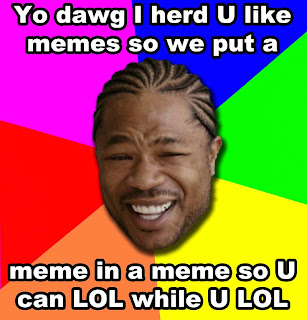 Over at the fantastic blog Billy Loves Stu, Pax Romano put together a fun little meme for horror bloggers. You know, as a way for all of us to get to know ourselves even more. While, sadly, there are no questions related to food, the meme asks some snappy, well-structured questions that delve deep into the very soul of the horror blogger.

Plus, I can't resist a good meme, so without further ado:

The First Ever Billy Loves Stu Meme for Horror Bloggers

1: In Ten Words or Less, Describe Your Blog:

Good-natured thoughts and analysis on the horror genre.

I was born in '67, so that plants me firmly in The Rosemary's Baby Era. Ohmygod, what have I done to my eyes?

In high school, I tended to gravitate towards the nice girls, even if the bad girls had that aura that could make me walk directly into a locker. So, I probably would've secretly lusted after Chris, but ultimately would've made the right choice and asked Sue. Then again, if I had asked Chris, the chaotic events of Carrie wouldn't have happened because I would've tripped over the blood bucket.

4: You have been given an ungodly amount of money, and total control of a major motion picture studio - what would your dream Horror project be?

The easy answer is a zombie apocalypse epic, but that might be addressed in AMC's The Walking Dead. I'd still want to do it my way, though. Hollywood, don't remake my idea, but I'd love to do a large-scale epic that has Lovecraftian horrors breaking through and taking over the modern world. Already working on the story.


5: What horror film "franchise" that others have embraced, left you cold?

I've had a hard time getting enthusiastic about the Saw movies since the first one. Some creative moments in the sequels, but I've really been lukewarm about seeing any more.

6: Is Michael Bay the Antichrist?

7: Dracula, The Wolf Man, The Frankenstein Monster - which one of these classic villains scares you, and why?

I'm going to have to go with The Wolf Man. He's entirely feral, a real berserker (intentional Clerks reference), and has a bite/scratch that is ten fingers and a set of teeth worth of supernatural doom. Yeah, Dracula has his faculties about him, but has an old world sense of honor. Frankenstein's Monster is an innocent at heart. Yeah, Wolf Man for me.

8: Tell me about a scene from a NON HORROR Film that scares the crap out of you:

When I was a little guy, maybe five or six years old - y'know, back when there were rotary phones and the Internet might have been something Batman used to snare a bad guy - I was scared for some odd reason of Jerry Lewis' transformation in the original version of The Nutty Professor. It was strangely chaotic and scary to see him choking and flailing around. Now I'm just scared of Jerry Lewis in Hardly Working. 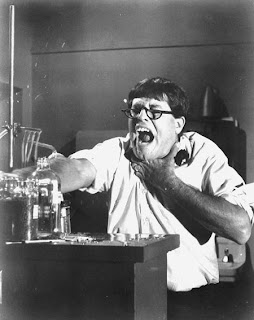 9: Baby Jane Hudson invites you over to her house for lunch. What do you bring?

Rifftrax versions of her old movies. Maybe they'll change her focus a little.

10: So, between you and me, do you have any ulterior motives for blogging? Come, on you can tell me, it will be our little secret, I won't tell a soul.

I honestly started this just to share my thoughts to what I thought might end up being an empty room. Apparently, a few people read those thoughts, for which I'm very grateful. Maybe deep inside, I wanted to make some new friends along the way. I also wanted to keep in practice with my writing, so it's worked out nicely.

11: What would you have brought to Rosemary Woodhouse's baby shower?

*resists urge to say "Devil's food cake"* I don't know, fireproof diapers maybe? That kid was going to be a handful.

12: Godzilla vs The Cloverfield Monster, who wins?

As much as I loved Cloverfield, I'm old-school. Godzilla takes this one after a comeback and a few well-placed atomic breath blasts.

13: If you found out that Rob Zombie was reading your blog, what would you post in hopes that he read it?

Rob Zombie actually shops at the store where I work, and at first I told one of my friends who knows him to mention my blog. Then I reviewed Halloween 2 in a blog in which I tried to break the news gently that I didn't really care for the movie. Now I told my friend to wait until I review House of 1000 Corpses or Devil's Rejects before telling him about it.

14: What is your favorite NON HORROR FILM, and why?

Probably Big Trouble In Little China. It's got it all: John Carpenter directing, Kurt Russell as the slightly dim but badass hero, Victor Wong as a wizard, James "Seinfeld, four!" Hong as the villain, three of the coolest superpowered henchmen, and big swashbuckling fun. I never get tired of watching and quoting it. 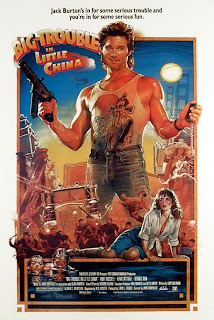 15: If blogging technology did not exist, what would you be doing?

Calling my friends with good-natured thoughts on the horror genre on my rotary phone.