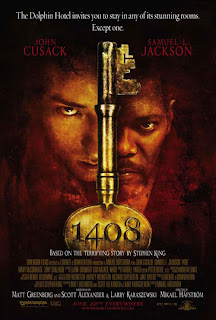 As my friend Rick over at The Paradise of Horror can attest, I am a very big Stephen King fan. I may have mentioned that I read The Shining in two days on summer vacation as an innocent, fresh-faced thirteen-year-old. The Stand changed my entire way of looking at writing and stoked my flames of love for apocalyptic fiction. King is my single biggest influence when it comes to creating stories. Sometimes movies based on his stories work (The Mist, The Green Mile, The Stand miniseries) and sometimes they don't (Maximum Overdrive, The Mangler). 1408 falls somewhere in the middle, with elements that really worked wrapped in a final product that just didn't stand out for me.

So you've got this guy, paranormal travel writer Mike Enslin (John Cusack), who really doesn't believe in ghosts, but wouldn't mind seeing one. He's the classic Stephen King "tortured writer," a character that indeed works because...well, King would know how rough it is to be a successful writer. He gets a line on an apparently very haunted hotel room in New York City's Dolphin Hotel, the titular room 1408. Of course, he has to check it out. This is curiosity I can appreciate.

The hotel manager, Gerald Olin (Samuel L. Jackson), warns Enslin not to do it. Enslin takes advantage of a state statute that forces hotels to rent out any available room and, despite intense pleas and solid information from Olin, settles into the room. Tiny things begin to happen at first, but when the clock radio (constantly blaring The Carpenters' "We've Only Just Begun" - shades of Christine) begins a countdown of sixty minutes, Enslin is really in for it.

He starts experiencing little things. Almost polite things. Mints are left on pillows. The toilet paper is folded neatly. The HORROR! Enslin is a little creeped out, but intrigued. Now he's experiencing something that's weird, but he thinks still explainable. When he starts seeing ghosts (that look oddly like weird TV transmissions) reenacting their suicides, that's when he realizes the game is afoot.

In one of my favorite creepy parts, he tries signaling in desperation to a gentleman across the street. The guy stands up in shadow and not only imitates Enslin's every moment, but mirrors them. When light settles on the fellow, we see it's Enslin himself. Hardly a moment to take it in, when a crazy-eyed Clint Howard-esque maniac swings a hammer at the "reflection." Enslin turns to see the maniac in his own room advancing on him before disappearing:


It wasn't Clint Howard, but rather in an odd little role, former super-badass martial artist Benny "The Jet" Urquidez. The Jet does a lot of stunt work and extra work now, but back in the day, he engaged in what was considered one of the greatest fight scenes ever caught on film, battling Jackie Chan in 1984's wonderful Kuai can che otherwise known as Wheels on Meals:

If Cusack and Urquidez had broken out into that kind of fight, this movie would've become my favorite movie of all time.

Enslin's visions get more and more intense, and more personal. He sees "footage" of he and his estranged wife Lily (Mary McCormack) and his daughter Katie (Jasmine Jessica Anthony), who died some time ago of an undisclosed disease. This life incident has caused Enslin to lose faith in everything, yet hold onto the notion of an afterlife. It becomes clear that the room seems to have it in for him, and is not going to let him leave. He tries going out the window onto the ledge, through ventilation shafts...nothing. The room forces him back every time.

Enslin manages to contact Lily via his computer, begging her to send help before his aforementioned escape attempt through the ducts. He manages to get her again after his failed attempt and discovery that Room 1408 is now my old hometown in winter. The room takes over his chat avatar and convinces Lily to join him in 1408, as the real Enslin screams in protest.
At one point, the room even convinces Enslin the whole thing was a dream during his surfing accident at the beginning of the film. But, like all evil rooms, it brought him right back to the madness. It even throws what might be a ghost of his daughter at him, before yanking the rug away on that, too.


Enslin discovers that 1408 won't outright kill him, but offers him the choice of reliving the hour of insanity over and over, or taking the "express checkout": suicide. Enslin, in a moment of clarity, fights back, lobbing a Molotov cocktail into the wall and setting fire to the room. At the last moment, he's rescued and reunited with Lily. Maybe the whole thing was a way for him to remember the good in his life and for unicorns to prance lovingly through the meadow in slow-motion. Maybe it was all in his head. Well, the last scene would probably dispel that.

1408 is clever in its own way. When the clock radio starts counting down from 60 minutes, it really is 60 minutes to the end of the movie. Lots of Easter eggs concerning the number 13. According to IMDB, the standard version's runtime is 104 minutes and eight seconds. But I found it relatively uncreepy. It wasn't a waste of time, but I didn't instantly add it to my Amazon wish list. It seemed to me to be a whole lot of bluster, but weak on the follow-through. Still, Cusack's acting is a real bright spot. He's given a chance to be in - for most of the movie - a one-man play, and he delivers. There could be a movie of Samuel L. Jackson standing there waving for 90 minutes, and I'd probably see it. He has a small role, but it meshes well with Cusack's. I wouldn't turn anyone away from it - it's not a bad one, just not as scary as I'd hoped.

Well, fellow zombie apocalypse survivors, if you find yourself at a hotel, make sure you stay off the ground floor to avoid the biters and out of room 1408, especially if you have a guilty complex.