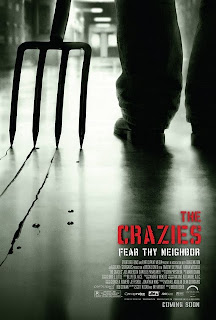 The word "remake" sends chills down a horror fan's spine more than zombies, ghosts, and crazed holiday-themed killers. Lately, the horror genre has been on a remake binge, especially with foreign horror films like [REC] (as Quarantine), Let The Right One In (as Let Me In), and Martyrs. How they can dilute the magic of the originals can probably be answered with the phrase "cha-ching." It is really all about the Benjamins. But American horror classics haven't been excluded either, with reboots to Halloween, A Nightmare On Elm Street, and the very well-made remake of Dawn of the Dead to name a few. When I saw George Romero's 1973 cult classic The Crazies was on the remake list, that old familiar skepticism was the first feeling I had. But there is that "you never know" feeling. I come back to the Dawn of the Dead remake - a retelling that was done right: just enough of the original to pay respects, but creative enough to stand on its own. 2010's version does pay decent respect to its elders, but does have enough strength to stand on its own without being too "slick" or too "let's pander to the kids who hang out at the mall" for its own good.

Where the 1973 version was directed by Romero, Breck Eisner handles the chores this time around with quite the capable cast. The small town of Ogden Marsh, Iowa, is just about perfect. Small-town folks enjoying small-town activities like the opening day of high-school baseball. Everyone knows everyone. In fact, when one of the townsfolk shows up at the game with a shotgun, Sheriff David Dutton (Timothy Olyphant) assumes he's just drunk. Forced to react when the guy raises the gun, Dutton shoots him down, an action he immediately regrets.

But former drunk Rory wasn't the only one exhibiting strange behavior. Farmer Bill worries his wife by staring into space and repeating words and phrases. Sheriff Dutton's wife, Judy (Radha Mitchell) examines him and, finding nothing wrong on the surface, sends him home. Later that night, Bill methodically traps his family in the house and burns it down. He expresses no regret or even knowledge of what he's done as he's placed in a holding cell. Dutton and his trusty deputy Russell Clank (Joe Anderson) investigate first the body of a dead soldier attached to a parachute, then a downed plane in a nearby lake that feeds...that's right...into the town's water supply.

Bill begins suffering more marked symptoms of something pretty nasty. I mean, look at the above picture. This disease - later referred to as "Trixie" - doesn't just give you a light cough and send you on your way. Dutton wants to shut off the water supply, but the Mayor is having nothing of that as he swims in his oddly-placed swimming pool. There are crops to consider, after all. Dutton doesn't care, so he takes the illegal course of action and shuts it off anyway.

It might be too late at this point. Other residents are feeling the crazy, acting strangely and deserting the streets. Then they get violent. Sheriff Dutton convinces Judy they should leave, but they are captured by haz-mat-suited military guys and herded into a makeshift quarantine area at the local school. They're suddenly separated when Judy registers as having a fever, one of Trixie's symptoms. In reality, she's pregnant, but the military doesn't listen to David's pleading as they take her to a room and strap her down on a gurney in a room full of other patients on gurneys, most of which are sick with Trixie.


Some locals stage a coup and in the confusion, all the townspeople either escape or are gunned down. David makes it out and finds Russell, and together they set out to rescue Judy. Just in time, too, as the principal - now infected - is going from gurney to gurney, impaling random people with a pitchfork. Before he can kill Judy or Becca (Danielle Panabaker), David guns him down. The four make it out of town, barely avoiding some thrill-seeking hunters who may have been nuts before Trixie. They're now hunting people, infected or not. Arriving at Becca's boyfriend's farm, they plan to wait out the military invasion and the infection, or at least get out of town. Some military guys show up anyway and kill both Becca's boyfriend and his mother, seemingly without cause. David and Russell capture a soldier and find out more about what has happened before letting him go. Their only option becomes clear: get as far away as possible as Ogden Marsh is about to be wiped off the map. 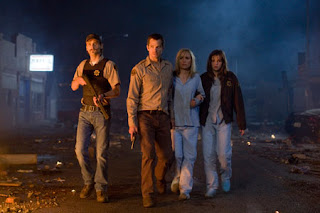 The group returns to the Dutton home to retrieve an old sheriff's cruiser. After a struggle with Rory's infected wife and teenage son, who have come for twisted revenge against the man who shot their loved one at the beginning of the film, the four leave. It isn't long before a military helicopter chases them into a car wash, where they battle more infected, losing Becca and their transportation.

Exhausted, both physically and mentally, they come across Russell's car, which he had told them had been forced off the road. Seeing a vehicle approaching and sensing it belongs to the military, Russell throws out a strip, puncturing the tires and causing the car to crash. David's not happy; he wanted to interrogate the driver. The driver's alive, and reveals that Trixie is indeed a biological weapon, and that the whole area will have to be purged in order to contain it. Russell immediately places a bullet in the guy's head as the trusty deputy begins to show signs of Trixie. He even levels the gun at David and Judy as they continue walking.

David manages to wrestle the gun away later, and forces Russell to come to terms with his infection. They discover a roadblock and Russell sacrifices himself to ensure that David and Judy can get past and continue their escape. Russell Clank, like his 1973 predecessor, dies a heroic death, and even gets to say the best line in the movie to the anonymous military/science guys: "Fuck you for what you've done."

David and Judy find a truck stop, completely empty. The military has killed everyone they herded into trucks to "let go." Not only that, the insane hunters from earlier are there and make escape just a tad more difficult for our intrepid couple. David and Judy finally make their long-awaited getaway in a huge semi truck.

Using a stolen radio, they track the countdown until Ogden Marsh is destroyed and the bomb blast nearly kills them. They crawl from the wreckage and look back at the mushroom cloud burning over the town they loved. Continuing on to Cedar Rapids, they wearily move towards the big city.

The big city which is now seen from a satellite picture, containing those feared words: "initiate containment protocol."

For a remake, I really dug the 2010 version of The Crazies. It dove right into the action and didn't let up, only taking moments here and there to let the characters advance a little. The cast was very good and, most importantly, the movie didn't insult my intelligence. It wasn't a bunch of teens who could be cast on some network teen drama prancing around and looking beautiful while spouting nudge-nudge-wink-wink snarks at each other, or breaking the fourth wall for that matter. I've long been a fan of Timothy Olyphant and Radha Mitchell, and they really didn't disappoint. Joe Anderson was extremely good as Clank, a role I really loved in the original. 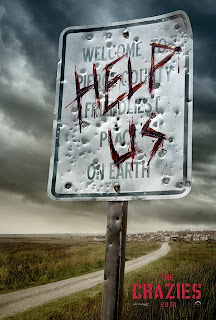 There were some interesting differences between the original and the remake, none of which really took away from each other:

* Clank was a deputy sheriff instead of a fireman, and didn't have a thing for Judy.

* Judy and David were married, where in the original, they were boyfriend/girlfriend.

* Judy survives, where in the original, only David makes it out. Also, in the original, David is captured and thumbs his nose at the whole military/science complex when they lament they have no immune survivors to base an antidote on. David knows he's immune.

* Two important side stories were done away with: Dr. Watts trying to find the antidote, and the disturbing story of Artie and his daughter, Kathie. Although, I practically CHEERED when Lynn Lowry - who portrayed Kathie in the original - made a cameo as an infected resident riding a bike and singing in the middle of town.

* The infected are changed physically in the remake, where in the original, the changes were more psychological. I wished they had done a tribute to the Knitting Needle Granny from the 1973 movie, though.

Good movie, really. It isn't on the level of another George Romero remake, the Dawn of the Dead redo, in my opinion, but absolutely worth my time and money. Fine acting, great pacing, and a really good script. If you must do a remake, try and do it like this, if you can, Hollywood. Thank you.

Well, fellow survivors, it's back to the chopper to guide more people to the shelter. Careful with the water you drink. You don't want to catch Trixie.

Stay cool and see you next time...