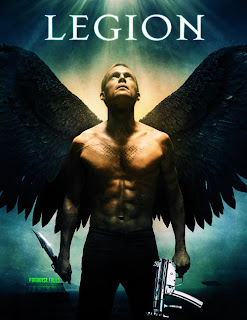 Everyone knows I dig the apocalyptic horror movie, especially by taking something that most likely wouldn't happen and throwing it out there in a way that makes it look like it could happen. It speaks to a part of me that is both fascinated and terrified by the end of the world, whether it be by natural causes or by the living dead or by a mad demigod or by sickness (The Stand). It hits home, but is just on the outskirts of reason enough to be intriguing.

I tossed around the idea that while apocalyptic fiction can be horrifying, it doesn't always classify as horror. In fact, a great deal of it falls under science fiction. When I finished watching Legion, I had my doubts that it could be called horror or science fiction. Speculative fiction, yes, but that's a very broad term. In the end (no pun intended), I decided to jot down my thoughts on it for two reasons. One, the very name of this blog is derived from a classic apocalyptic movie (Dawn of the Dead), and two, it's my blog and I can write about the sandwich I ate earlier today if I felt like it.

Legion had a very promising premise: God has become disappointed with His children and decides to send another world-cleansing event to reboot Earth, much like the flood that Noah and his crew rode out. Only this time, he sends his vast army of powerful angels to lay waste to the human race through outright destruction and possession of bodies. That right there is scary. Not to mention the heavy religious undertones, which speak to the very core of nearly every person - you throw religion in the mix and you're treading on literally sacred ground and the very thought of blending it with thrills and chills is enough to excite, scare, and, in some cases, anger. Legion doesn't go all that deep, but just enough to give you a decent look into what the spiritual beings are thinking.

Basically, Michael (Paul Bettany) - a general-angel in Heaven's army - descends to Earth, cuts off his own wings, and gathers a butt-load of weapons. Not long after he arrives, he is forced to battle a possessed policeman, signaling that the end is indeed nigh. As he drives out of Los Angeles (the City of Angels, get it?), the lights go out block by block.

At the desolate Paradise Falls Diner, we meet a cast of various characters. There's good kid Jeep (Lucas Black), who has horrible nightmares about a coming disaster that involves the love of his life, Charlie (Adrianne Palicki), the pregnant (not by Jeep) waitress at the diner. Jeep's disillusioned dad Bob (Dennis Quaid) owns the diner and has as his cook, Percy Walker (Charles S. Dutton), a very devout Christian. Also present are the well-to-do but dysfunctional Anderson family: tired Howard (Jon Tenney), stressed Sandra (Kate Walsh), and tarty Audrey (Willa Holland), who are waiting for Jeep to fix their car. Joining them on his way to see his child is Kyle Williams (Tyrese Gibson), who may or may not be a shady character. With all the pieces in place, things begin to get a little weird. The diner's lone TV loses its weak signal for a while before blasting color bars and emergency tones. The phones go down. They're in the middle of the desert, so cell phones aren't exactly working.

Into all this confusion and doubt walks sweet Gladys Foster (Jeanette Miller):

She orders a steak extra bloody, makes friendly small talk with everyone, attracts flies, and ultimately tells Charlie that her "baby's gonna burn." Taking her for a religious fanatic, Charlie ignores her, but Gladys goes right on gleefully predicting everyone's grisly fate. When Howard objects, she gnaws a chunk out of his neck before climbing to the ceiling. She manhandles everyone who tries to restrain her before mocking Jeep and advancing on him before Kyle guns her down.

In trying to get Howard to the nearest town, the party is attacked by an enormous swarm of flies, forcing them to turn around and take refuge in the diner. About this time, Michael arrives and arms everyone, saying that "more like her" are on their way. They barricade the diner and prepare for an onslaught. Night falls and in the distance, gentle ice cream truck bells are heard, and a creepy, spider-like ice cream man with an monstrous unhinged jaw emerges...featured heavily in the trailer, if you recall.

This spidery fella attacks, and is soon joined by scores of possessed people. In the chaos, Howard is extracted from the diner, his screams echoing into the night. The seemingly last people on Earth count their blessings and their losses: Howard's gone and Sandra's mind is going fast.
In the downtime, Michael reveals why the world is ending. He also informs Charlie that her child is mankind's final hope. Mincing no words, Michael says that he is the one who was supposed to kill the child, but refused, trying to convince God that humanity was still good and that He still loved them. He tells Jeep that it's because of his unwavering faith in others, such as his father and Charlie, that inspired Michael to make a stand. The first wave of attackers, he says, was to "test our strength." The next will be to "test our weakness."

The next morning, Sandra awakes to the sound of agonized crying. Outside the diner is Howard, pinned horribly to an upside-down makeshift crucifix, boils covering his body. As she runs to him, he explodes with acid, but she is saved by Percy, who takes the brunt of it. Howard's obviously dead now, and Percy dies after making sure Sandra is back inside. Sandra's mind goes bye-bye right about then. That night, it appears that an innocent family is trying to fill their gas tank. When they're killed by the possessed, Kyle goes nuts when he sees a child falling victim to them. It's a trick, and Kyle is killed by the child and other possessed despite Audrey trying to play hero.

Charlie goes into labor and delivers this child she really doesn't want. At the instant of birth, celestial trumpets sound. Michael's friend and fellow general Gabriel (Kevin Durand) has arrived to do the job Michael refused. Sandra suddenly turns heel and tries to take the baby to Gabriel, only to be gunned down by Michael. Humans can't do much against Gabriel when he makes his entrance, and Bob is gravely wounded. Michael insists that the others take the baby and leave while he battles his friend. They do, untouched by the possessed, who now seem afraid and reverent of the baby.

The angel fight is pretty wicked. Michael's at a serious disadvantage since cutting off his wings and becoming more human, and it ends up being his downfall as Gabriel kills Michael. In a nice touch, Gabriel weeps for Michael - they are angels of God, after all, not evil beings - before preparing to carry out his orders. Bob has a last laugh by igniting the gas feed to his stove, leveling the diner and those outside.

Michael's tattoos show up on Jeep, signaling the once-angel's death. Gabriel attacks the getaway car, momentarily derailed by Audrey's painful sacrifice. In attempting to escape, Jeep tries to defend Charlie and the baby, but Gabriel nearly kills him before Michael suddenly returns, angelic powers restored. According to him, he "gave God what He needed, not what He wanted," which bodes well for humanity. Michael easily trounces Gabriel, but spares his life. The heroic rebel angel then appoints Jeep the baby's true protector and tells him to seek out prophets and learn to read the tattoos that have appeared on his body. Sequel, anyone?

I was a bit disappointed that we weren't treated to more scenes of worldwide destruction, but at the same time, letting your mind fill in the blanks is somewhat satisfying. The cast was quite good and the movie held my interest, even if it was just to see how the story played out.

Legion wasn't "fright-scary" or "jump-outta-your-seat-scary." The idea of God wiping out humanity like he did in Noah's time is pretty frightening. The helplessness of the human race before the sliver of hope that might remain. And there's your reason for good apocalyptic fiction: that somehow, some way, someone's going to find a way to survive and battle back, maybe even win.

There you have it. Legion is a good movie to pop in, watch maybe once, and settle back to think about the effects of apocalyptic fiction. Or it's good as background noise, which for me, is a sign that I at least liked it a little. I did like Legion, but I'm afraid it won't be joining my collection.

Until next time, my fellow survivors, be wary of overly sweet old ladies ordering steak cooked rare in desert diners.

P.S. The sandwich I had today was peanut butter and jelly, and it was tasty.