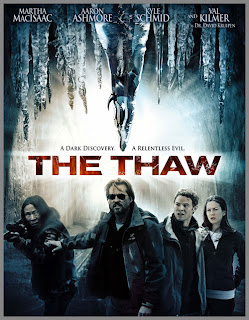 I can recall a time when global warming was the scary scenario du jour and no matter which side you stood on the debate, it was a rich topic. Of course, when the zombies rose, it kind of got shuffled to the back of our collective brains. Those brains that weren't being dined on, that is. In movies, we were treated to the grand spectacle - with a sizable grain of salt - to the effects of global warming in The Day After Tomorrow. The spectacle in The Thaw, written by Mark A. Lewis and Michael Lewis, and directed by the former Lewis, is less grandiose but still a little chilling to think about.

So after we see some video footage of a bug peeking cutely out of a wound on a woman's forehead, there's a montage of warnings about the end of the world, mostly through global warming. There's even a nice cameo by William B. Davis aka The Cigarette Smoking Man from The X-Files. Once we settle in, we meet Dr. David Kruipen (Val Kilmer) and his crew trying to tag a polar bear. They do and they get a bonus...well, sort of. Turns out the bear was gnawing on the carcass of a perfectly-preserved wooly mammoth buried in the glacial flow. 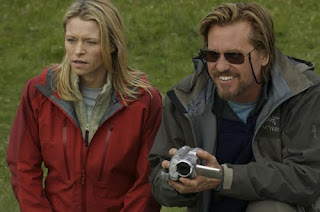 "Did you know I was in Real Genius?"

Back in the lower forty-eight, a group of students is gathered to join Dr. Kruipen. In the meantime, Kruipen calls his estranged daughter, Evelyn (my good friend Andre Dumas...no, wait, Martha MacIsaacs) to join him as well. She's still pissed at him over her mother's passing, but eventually gives in.

Things get weird when Kruiper and his colleagues have to put down their dog and talk about "being ready." One of the scientists, Jane, seems a little under the weather, too. Something ain't right.

Whoa, that's a lot of bugs.

Evelyn joins students Federico (Kyle Schmid), Ling (Steph Song), and Iceman...I mean, Atom (Aaron Ashmore) along with non-WGON helicopter pilot, Bart (Viv Leacock) to journey to Kruipen's camp. Bart indicates that Evelyn is not to come along, citing a sudden change of plans directly from Kruipen himself, but she is insistent.

After a messy gun battle at the outer camp, Sara leaves Kruipen for dead and motors back to the camp. As morning breaks, she arrives in pretty bad shape. And things are getting worse for the makeshift Scooby gang, as Bart's arm is infected, Ling is breaking out in weird sores, and Feddy's peeing blood. Just before dying a seriously icky death, Sara warns Evelyn to not "let them leave." Turns out she has the same sores and egg growths that the polar bear had, and that Bart and Ling have. 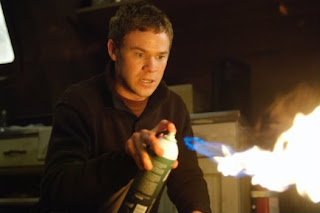 "I'm supposed to have ice powers, but this'll do."

Turns out the bugs aren't actually insects at all. They're vertebrates, and that becomes their nickname for the rest of the movie. They're sort of the evil tag-team of the prehistoric world, as the male bites a victim's skin, creating a hole for the female to crawl into and lay eggs. Lots of eggs. More eggs than should be allowed. Ling is then quarantined and Bart decides to have his arm chopped off to stop the spread through his body. You know those "stop the infection by removing a limb" moments never turn out pretty, and this one doesn't disappoint.

Things go from bad to aw-what-the-HELL bad when the bugs multiply like little crawling reality shows. The scene of what's left of the polar bear entirely covered by a shimmering blanket of bugs is - despite the obvious computer effects - pretty unsettling. Feddy, in his confusion and phobia, shoots the extremely infected Ling, but she survives the shot. In a final act of compassion, Bart enters the bug-infested room and cradles the girl as the bugs close in on their bodies. Brrrr.

A desperate Feddy is killed by a returning Dr. Kruipen and it's a joyous reunion for about five seconds. See, Dr. Kruipen is an extreme environmentalist. Sure, he's respected, but he has some rather radical views. It's revealed that he has infected himself so that he'll be a "Patient Zero" of sorts, spreading a disease that will, in his mind, surely be contained but only after the danger of global warming is made glaringly obvious.

And most people just do a Power Point presentation.

Didn't know flatulence was a side effect of hosting prehistoric parasites.

Kruipen tries to leave on a rescue helicopter, and strand Evelyn and Atom at the Arctic station. He knows it's harsh, but he thinks she'll be safe there. Atom tries to throw off the chopper's flight by hanging on, but he's thrown off to the ground in a fatal fall. Evelyn then displays more badassery and fires a rifle at the chopper until it crashes into the station, killing all aboard and presumably the vertebrates inside. Climbing into a grounded chopper, Evelyn remains until another rescue chopper arrives and takes her to safety. According to the epilogue, she's eventually hailed as a hero for bringing to light the disaster that never happened.

I like it when my friends save the world.

Although, during said epilogue, a dog is shown chewing on a dead bird. A dead bird chock full o' prehistoric parasitic vertebrates. Yum. He then joins his master for a drive...towards a city.

The Thaw is a decent little movie, part of the Ghost House Underground movie collection. The acting is not bad at all and the gore will keep the bloodhounds fairly satisfied. I expected more creepy-crawly sensations, but it didn't skeeve me out as much as I hoped it would. You'd think it would be a more "political" movie, since the real evil of the film is man's ignorance of an increasingly ruined world that he may have created. There isn't really any preaching because the balance is struck between that ignorance and the radical methods Dr. Kruipen wants to employ and that Atom endorses until he comes to his senses. No preaching, no politics, and an easy viewing make it something okay to watch once and be done, or to catch late-night, perhaps watered-down on SyFy. It's nothing bad, but nothing memorable either.

Little did they know about the other disease that changed our world, eh, fellow survivors?

Until next time, be safe and bar the windows...