The Loved Ones (2009) Proms Sure Have Changed 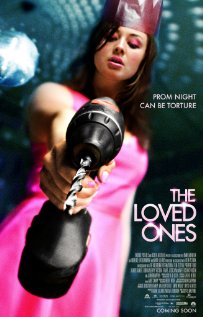 I remember prom. It was senior year, 1985, northern Michigan. I wore a white tux and went with a friend of mine out to dinner, some nice dancing, and that was pretty much it. Nothing spectacular and nothing dramatic. Just a plain old good time. She didn't kidnap me and inject bleach into my voice box or anything. I'm pretty sure of that.

The prom featured in Sean Byrne's 2009 horror trip The Loved Ones is a far cry from the one I remember, and a far cry from those cheesy 80's coming-of-age raunchy teen comedy versions of proms.  This one is disturbing, insane, and white-knuckle-inducing.  Although it was released in Australia in 2009, it's finally been distributed on our shores, and it was well worth the wait.  Sure, the high school prom has figured heavily into horror over the years, in films like Prom Night and Carrie.  But The Loved Ones turns it on its ear somewhat and gives the setting a fresh new take. 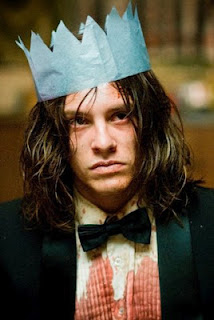 Brent (Xavier Samuel) is having a rough year, to say the least.  His father died in a horrible accident when Brent swerved to avoid hitting someone in the middle of the road (an incident that is more important than you think).  His mother blames him - in a roundabout way - and spends each day in a depressed haze.  The only bright spot, other than his goofy best friend, is his girlfriend, Holly (Victoria Thaine).  She's good to him, and truly loves the morose kid.  Brent seems popular, because he's also asked to prom by shy, demure Lola (Robin McLeavy).  He politely declines, and she seems hurt.  While on a walk and a climb, Brent just wants to clear his muddled mind.  It's here that his world changes...well, significantly.

Waking up from a chloroform nap, Brent finds himself tied to a chair while Lola and her deranged, wild-eyed father recreate their own twisted prom.  And believe me, "twisted" is a severe, severe understatement.  Turns out Lola isn't so demure after all.  She wants a perfect prom, and she will do anything to get it.  Her father, in turn, will do anything for his baby girl.  Brent, muted by a shot of bleach to the voice box, is thrust deeper and deeper into a depraved, sadistic night that involves sharp objects, power tools, and pure desperation. 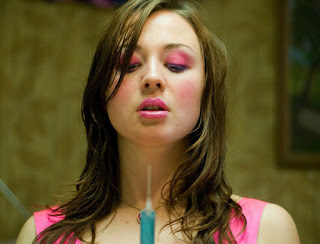 I'm not going to go any further with the synopsis because it's really something you'd need to see for yourself.  It's a high-energy downward spiral with incredible acting, a crackling script, and directing that keeps everything going non-stop start to finish.  Byrne has set the bar high for himself, and the acting from Samuel, McLeavy, and John Brumpton (the father) is top-of-the-line.  I don't recall ever cheering so much for a protagonist to escape his predicament like I did for Samuel's Brent.  I mean, escape becomes increasingly impossible as Lola and her pops get increasingly brutal.  McLeavy plays crazy so well, and Samuel does an excellent job with no words for the entire ordeal. 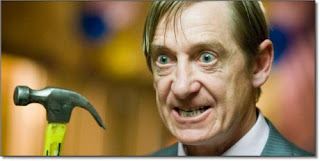 The Loved Ones had a lot of build-up amongst the horror community, and it's well-deserved.  If you have the stomach for it, it's a film any horror fan shouldn't miss and one of the better ones I've had the pleasure to review this year.  And, oh, the music...chilling...brrr....

So, enjoy your prom, and just be glad you didn't have to spend it with Lola and her family.  You'd have to hide the bleach and the power drill...