Vampires (2010) They Can Be Dysfunctional, Too 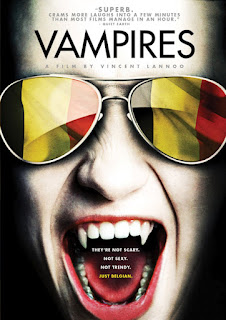 I'm not big on vampires. It's not that I don't see their value in the history of horror film and literature. I like a lot of vampire mythos. I think it's because they've been unjustly thrust into a new segment of pop culture. You know what I'm talking about. It involves sparkling and brooding, and it shall not be mentioned here. I prefer the horrifying portrayals of the bloodsuckers like Salem's Lot or 30 Days of Night or the fangless biters in Near Dark.  Hey...maybe I am big on vampires after all.

While I love for my vampires to be scary, if they can be presented as funny in the same vein...ha!  Vein!  Get it?  Anyway, if they can be presented as scary and funny, that would intrigue me.  A film falling in that category comes to our shores from Belgium, as writer/director Vincent Lannoo brings us Vampires (not to be confused with the 1998 John Carpenter film of the same name).

Filmed in "faux documentary" style, Vampires is the apparent third attempt by a documentary filmmaker to record the daily lives of affluent vampire families in Belgium.  The first two film crews didn't quite make it, but an understanding allows the director to settle in with a friendly albeit dysfunctional vampire family. They're the average vampire family with a bit of money and prestige.  They enjoy meals provided by their "meat," a runaway former prostitute who willingly offers her blood for their dinner.  They have a couple older vampires who live in the basement, disgraced by their lack of children.  There are strict rules for vampire families, including the "children equal prestige" rule.  Thanks to these rules, vampires exist - albeit with some disdain - alongside humans, several of whom aid in their fanged neighbors.  Georges, the head of the family, is married to the flighty Bertha with which he has two children - who are likely not actual relatives.  Sampson, the older brother, is rebellious and impetuous.  He's also getting down and dirty with the community leader's wife, a huge taboo despite the fact that otherwise, vampires can pretty much do the squelchy with anyone they wish.  And I do mean anyone.  The daughter, Grace, longs to live and die as a human to the point of wearing pink, having a human boyfriend, and practicing suicide so that she can even pretend to feel like she's dying. 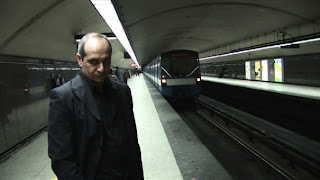 The documentary crew follows the nightly life of the vampire family, and their normal is quite literally the flip side of our normal, despite the common ground of family dysfunction.  Things grow complicated when Sampson is caught messing around with the wife of the leader (who himself is an old vampire soul in a 12-year-old body).  Facing execution by sunlight, Sampson arranges for his family to flee to Canada, which they view as below their station.  As they adjust to their new life, some enjoy it more than others.  Georges is miserable and Sampson loves singing songs for money and dating a Canadian human.  The most intriguing and most poignant storyline involves Grace, as she falls "ill."  Her final fate is both silent and quite moving.

I wasn't expecting a darkly funny film with its own mythology - the "rules" - but I found myself enjoying Vampires quite a bit.  The actors playing the toothy family pull off the myriad of personalities with skill, behaving and sounding a lot like a typical family.  Only with more bloodshed.  There are genuinely funny scenes, such as when Sampson gushes about his new life in Canada.  Some horrific scenes as well, such as when the vampire society has a "dinner party."  And as I mentioned, the most poignant and heartfelt scene involves young Grace as her fate is revealed. 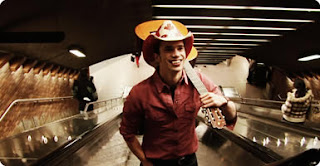 Sure, I'm not someone who's much into vampires - I seem to be more of a zombie/ghost/possession kind of horror fan.  But I'm open to anything good.  I thought Vampires was good.  The only real issue I had with the film was how abruptly it ended, as if the filmmakers had a deadline they realized with twenty minutes to go and decided to trim about fifteen minutes from that.  Other than that, the comedy and horror mix subtly and it plays like an informative documentary about family life.  Or un-life.

Until next time, dear readers, just be careful if you're backpacking in Europe and someone invites you to their brownstone for a bite.  The old joke might come true...