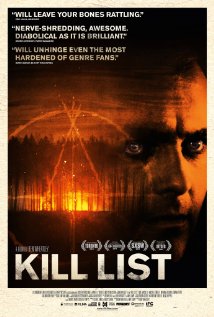 Say you have a job.  You're pretty good at it.  One day, however, there's an incident.  You mess up and get taken down a few pegs.  You move on.  You're not entirely happy, but you move on.  Then someone comes along and wants you to do your old job again, but won't tell you much about it.  You know the money's good but the instructions are weird.  If they ask you to sign in blood, you better start checking your house for weird symbols scratched behind mirrors because things are about to get funky.

Right there, you've got the setup for the wonderfully weird British horror offering, Kill List.

Written by Ben Wheatley and Amy Jump, and directed by Wheatley, this moody and suspenseful flick isn't your run-of-the-mill best-buds-road-trip-from-hell fare.  Yeah, there's the actual "kill list," as you'd expect when two mercenary hit men are involved.  But there's so much more. 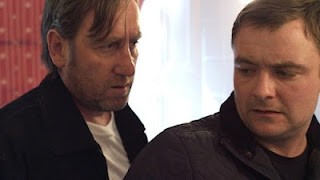 Jay (Neil Maskell) is a retired mercenary whose last job, in Kiev, didn't go so well.  It haunts him as he tries to live a normal life with his wife, Shel (MyAnna Buring) and son, Sam (Harry Simpson).  He has his best friend and fellow mercenary, Gal (Michael Smiley a.k.a. Tyres from Spaced), over for dinner.  Gal brings his new girlfriend, the friendly and somewhat odd Fiona (Emma Fryer), along and the dinner goes from good times to big-time tension in a matter minutes before turning back to drunken friendliness.  Fiona draws a strange symbol behind a mirror in the bathroom, then goes about her business.  Jay and Shel argue...a lot.  Money's tight, and that's part of what's straining Jay and Shel's marriage.  Then Gal brings the offer of a job to Jay, and they learn they must eliminate the people named on a list.  Simple enough, right?  Not so fast.  Why is there a priest on their list?  Why isn't he scared?  Why does the pornographer say he knows Jay before they off him?  And what happens during the stakeout of the third name on the list?  The film delves into something completely unexpected, yet consistent with the signs.  The ending, which I won't spoil here, isn't anything you may have guessed.

While the ending is a true mystery, the whole film will make you think for days after it's over.  The buildup of tension is tremendous, as the viewer just doesn't really know what lies ahead on Jay and Gal's road.  It's increasingly violent, mysterious, and strange as it goes.  The acting is outstanding as Maskell, Smiley, and Buring pick up the film and run with it like a precious rugby ball.  They're tense and you can practically feel it through the screen - the list is as much a mystery to them as it is to us.  Wheatley provides taut direction and unflinching framing of this descent into something maddening. 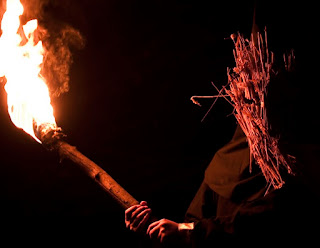 There are definitely some real shocks in this movie.  It will mess with your mind, and you'll thank it politely.  Then you'll twist your brain around trying to figure out the symbolism of everything you just saw.

Just remember that if someone approaches you with a strange "list" of some kind, start sprinting the other way.

Even if all they want is a gallon of milk and some bread.  You never know!

Now, here's the trailer for you to enjoy...