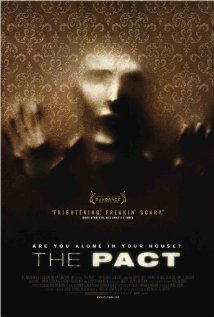 Sometimes, just a well-placed shadow and a dark room can be just enough to get your heart racing.

Yeah, I know gore makes the headlines but a good suspenseful, creepy atmosphere can reach further into your soul and run it through a blender.  And most recently for me, The Pact was that blender.

Written and directed by Nicholas McCarthy, this sweet little thriller doesn't employ colorful special effects or a cast of pretty semi-teens to get its point across.  Instead, it draws you into a confined space and deftly hides things until it decides to show them to you in some pretty unique ways.  Seriously.  There are a couple moments when you might say, "That was different." 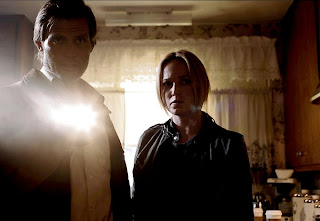 On the heels of her mother's death, Nichole (Agnes Bruckner) argues via phone with her estranged younger sister Annie (Caity Lotz) before saying good-night to her little daughter, Eva (Dakota Bright), who is staying with her cousin, Liz (Kathleen Rose Perkins).  There...right there, you've got the family unit, which is an underlying theme of the entire film.  Nichole disappears while investigating a strange noise in her late mother's home.  When she doesn't check in, Annie meets Liz and Eva there to prepare for the funeral, sure that former drug addict Nichole will eventually turn up.  During the night, weird noises ring out and the lights flicker as Liz disappears while Annie and Eva escape the chaotic house.  Annie goes to the police, and the only one who will believe her is Detective Creek (Casper Van Dien).  They investigate the house together, and find that there's more to it than meets the eye.  While Annie sees strange, terrifying apparitions, and witnesses a strange freakout by a local psychic (Haley Hudson), she and Creek begin piecing together the mystery of the house and what happened to Nichole and Liz.

The answer came out of left field, yet made perfect sense.  As is my practice, I'm not going to spoil it here, but I can tell you that you may not see the resolution coming. 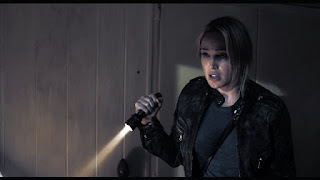 The Pact, despite the minimalist title, really delivered for me.  McCarthy's plot and direction, with its genuinely interesting and surprising twists, was well-paced and well-choroegraphed.  Like I said, things happen and they may catch you off-guard.  Some will have you nodding in agreement and others will have your jaw being scraped off the floor.  The effects are bare-bones, but this isn't an effects-driven film.  The effects that are employed are pretty jarring.  You'll never look at Google Maps (or a film version of it) the same way again.  Shadows and space are used to their utmost, guaranteeing at least one instance of the viewer peering through their hands in fear.  Give me a shadowy atmosphere over computerized gore any day.

The acting is top-notch.  In her short time on-screen, Brucker sets the story's table with a solid performance as Nichole.  Van Dien has come a long way from Starship Troopers (which I really dug) - he's older and definitely more sure of himself as an actor, and his character wasn't a cardboard cutout of a sympathetic, grizzled police detective.  I really enjoyed Hudson's blind psychic Stevie:  rather vacant yet insightful, a wisp of a girl uncovering something very sinister.  Living up to her billing as lead, Caity Lotz turned in a stellar performance.  Her Annie is afraid yet strong and determined, her will to find her sister and cousin - and solve an old mystery - beating out her fear of the unknown surrounding her.  And boy, does it surround her.

The Pact is available on some on-demand services, so check around and see if you can find it.  It's worth it.

Now check out the trailer: