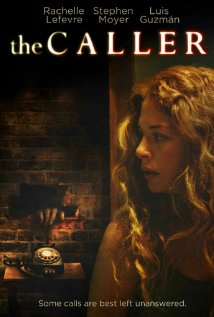 I actually stopped myself from making a "Who was phone?" reference in the title.  I should treat myself to a cookie.

The Caller is a neat little bit of Rod Serling-esque horror and suspense that creates a seriously interesting "how is she going to get out of this?" atmosphere.  There's nostalgia surrounding the trusty old rotary phone.  I remember the smooth whir of the dial as it spun, the restriction in movement thanks to the curly wire that always needed to be untangled, the bell ringer...I'm not that old, but I was a kid in the 70's and grew up into the 80's.  Portable phones still weighed as much as a set of small dumbbells. 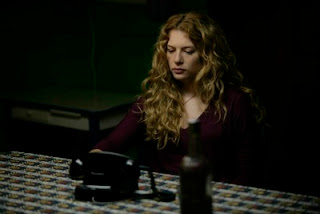 Written by Sergio Casci and directed by Matthew Parkhill, The Caller tells the increasingly-tense story of Mary Kee (Rachelle Lefevre), a new tenant in a quaint old Puerto Rican apartment building.  She's also a grad student trying to get away from her abusive ex-husband, Steven (Ed Quinn), and developing a relationship with John (Stephen Moyer of True Blood), a professor at the college.  In her apartment is an old rotary phone that soon starts receiving wrong number calls from a lonely woman named Rose (Lorna Raver of Drag Me To Hell).  At first it seems innocent, but then Rose becomes obsessive, especially after she implies that she's killed her husband.  What really creeps Mary out is the fact that Rose claims to be calling from the past.  And like the frightening Steven, Rose isn't willing to let Mary go.  That brings me back to the original question, "how will she get out of this?"  If she's really in the past, then she can affect Mary, but Mary can do nothing.  But really, you'd have to see how it turns out, because I'm not spoiling it here.

While the very end of the movie wasn't what I'd hoped for, the fact remains that the rest of the movie is a fine study in suspense and tension.  Mary is in a hugely frustrating situation:  she can't just change her number or even move because if Rose is truly stationed in the past, and she can affect events that affect Mary.  On top of that, she's got Steven continuing his abuse even after a restraining order is in place.  Mary has two allies in John and the apartment building's caretaker, George (Luis Guzman), but are they enough?  It's a valid question. 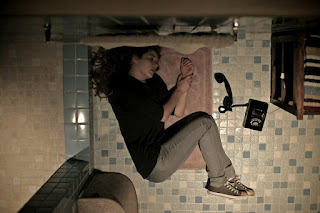 The Caller could easily have been written by Rod Serling or been an episode of Outer Limits as its premise is simple, but relies on the viewer's feelings of frustration for Mary because she's in a seriously helpless place.  It's moody and tense with great onscreen acting by Lefevre and chilling voice work by Raver.  I mean, Rose sounds like a sweet old woman at certain times, but boy, does that evil creep into her voice when she's angry.  Honestly, I didn't want to answer my phone for a few days after this movie - even though I don't have a rotary phone, and there's nothing scary about my cell's generic ring tone.

Here's the trailer for you to enjoy: