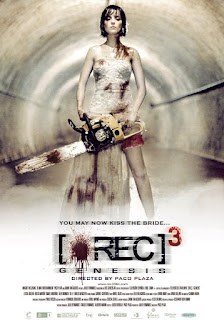 I'll go on record right now and say that the Spanish horror franchise of [REC] films is one of the best series of horror films, in my humble, little opinion.  I'm sure there are differing opinions, but this is mine.  I love [REC] and [REC2] like I love cake. They're both heaping helpings of visceral tension with a claustrophobic, scared-of-the-dark atmosphere as the icing on top.  While the franchise is essentially going to be a trilogy, it has a sort of "middle episode" that strays from the usual formula of darkened hallways, scarce lighting, and outright terror.  [REC3]:  Genesis is definitely a departure from the other two films, especially in tone.  While it is a little jarring, that isn't necessarily a bad thing.

Paco Plaza, who co-directed the first two films with Jaume Balagueró, takes the solo helm for this film which, unlike the first two, takes place over a longer period of time.  We begin in the afternoon and end the following morning, whereas the others were in real time.  There are two huge differences that will either be applauded or derided:  one, the use of the first-person camera is not all the way through the entire film, and two, the tone strays from the franchise in that it employs much more humor.  Don't get me wrong:  it's still full of gore, frights, and outright creepiness.  But it's also funny in many parts. 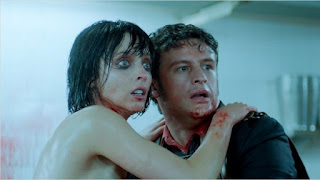 The movie begins with a wedding, and we're introduced to many of the characters, mostly family and close friends of the bride, Clara (Leticia Dolera) and Koldo (Diego Martín).  They're a beautiful couple (who look a little like a young Shelley Duvall and Jason Segal), getting married in a beautiful church in a beautiful part of Spain.  You just know this idyllic event is going to be ruined by bitey demon-things at some point, and you would not be wrong.  In fact, there's a clue early on that tells you who is going to be the first to be all bitey.  It's just a sweet wedding and reception (and I love the touch of a DVD menu of the wedding starting the film - trust me, you have to see it, it's quite funny). But when a dear uncle exhibits strange behavior - which gets really strange - all hell breaks loose.  The infection that spreads in the [REC] films is fast-acting and truly evil, in every sense of the word.   The survivors have to scramble and in the chaos, Clara and Koldo are separated.  The driving force of the film kicks in here:  Clara and Koldo's love and desire to be together versus the evil demonic infection.  What happens after that is all-out grindhouse-y fun with some really clever moments (that I can't really spoil), even if it does stray from the already-successful formula. 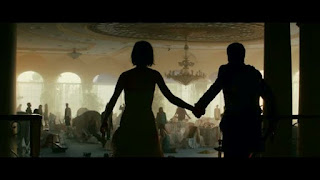 It's a change of pace from the first two films, to which, as a sequel, this film will always be compared.  There's a wackiness that threads its way through the horror, involving things like ancient armor, a Spongebob knock-off, and a badass, chainsaw-toting bride.  Seriously, when Clara has had enough and grabs that chainsaw, you know it's on like Donkey Kong, baby.  [REC]3:  Genesis is like a quick breather in between more intense episodes, and the franchise is set to finish off soon with [REC] 4: Apocalypse which tells you right there where the infection is heading.

A fun, strange, and still-terrifying film from a country that produces some great horror films, [REC]3:  Genesis isn't the same animal as its predecessors, but it's still good and still has that sense of hopeless doom...with one small glimmer of hope, but I'll let you figure that one out for yourselves.

Until next time, chopper passengers, here's the trailer: