Hell of the Living Dead (1980) A Nostalgic Mess 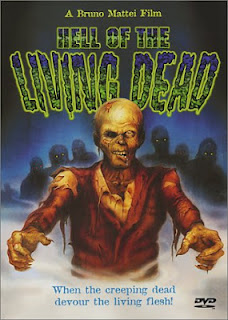 Hell of the Living Dead.

Night of The Zombies.

These are just some of the titles this wild mess has gone under, like a sneaky con-man sliding from alias to alias.  I can almost envision this movie sitting in a dark corner, cackling over its latest grift, looking all disheveled and wild-eyed.  It not only lifted things like incidental music - which I'll get to later - and documentary footage, but it may also steal your soul.

And yet there's an odd, nostalgic feeling to this strange movie.  As funny-awful as this movie is, there is a sense of carefree abandon about the experience.  At the time, it was certainly the goriest picture I had ever seen in my then-sixteen years.  My summers in the 80's were usually pretty fun and free-wheeling, what with no Internet and massive video games to keep me inside all the time.  Time spent indoors was either with reading, watching baseball, or watching movies I rented or borrowed.  I can remember friends of mine lending Hell of the Living Dead to me in 1984, recorded on VHS off of a movie channel which I couldn't get living in the woods.  I recall thinking to myself that I was ever quizzed on what the plot was, I'd be stumped.  But one could get extra credit in the "gratuitous cheesy gore" section of the test.

You want to know a clue that this movie is up to something?  It's co-written and co-directed by Claudio Fragasso.  You may remember him from my reviews of Troll 2 and Best Worst Movie as the director and co-writer of that vegetarian goblin cult classic.  When you see Troll 2 and you listen to his rants in Best Worst Movie, then things fall into place about Hell of the Living Dead.  It all makes sense.  Well, sort of. 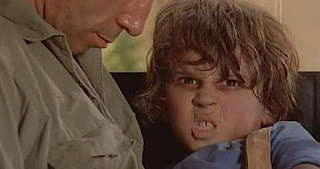 Rrrrgh - I want my ICE CREAM!
Hell of the Living Dead seemed doomed from the start.  Like now, zombies were a hot commodity back in the 70's, with George A. Romero's Dawn of the Dead (released as Zombi in Italy under Dario Argento) and Lucio Fulci's Zombi 2 splattering screens in the latter part of that decade.  Italy became a breeding ground for quick, inexpensive zombie flicks, and Hell of the Living Dead was barely given a budget.  Not to mention, much of the footage shot by director Bruno Mattei (credited as Vincent Dawn) was apparently not up to snuff, so they pieced together a mish-mash of already-shot footage and clips from a documentary about native rituals.  Then there's the issue with the music.  When you pop in Hell of the Living Dead, you may see that the soundtrack is by none other than Goblin, the same group that provided the now-legendary score to the original Dawn of the Dead.  After a few minutes, you'll soon realize that not only is Goblin doing the music...it's the exact same soundtrack as Dawn of the Dead.  They didn't even bother to get new music.  Hell, Goblin apparently didn't even allow it, but hey, what's a little legal trouble to a juggernaut like this movie?

Despite what I said before, there is a plot.  An accident at a chemical plant in New Guinea lets loose a contagion that causes living things to become sadistic, flesh-eating automatons.  It also causes their faces to take on a weird shade, but that's neither here nor there.  After foiling a terrorist takeover of an embassy, a crack military unit is sent to New Guinea to find out why communications with the chemical plant have been lost.  The unit is comprised of stock characters:  the hunky hero guy, the almost-hunky guy, the crazy guy, and the goofy guy.  They meet up in a seemingly-abandoned settlement with some people trying to escape the land:  the half-tough/half-screamy woman reporter, her half-brave/half-nauseous cameraman, and a family of three with a sick child.  The settlement is a wash, as the family is slaughtered by an infected priest and their now-bitey child.  The other six take off further into the jungle, offering the reporter an excuse to suddenly remove her shirt and claim she can communicate with the indigenous people.  The dead rise at the village, so the crew must bug out again, finally stopping at a plantation in the middle of nowhere. 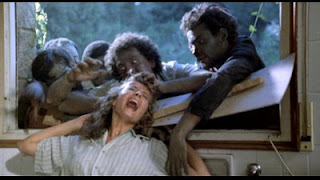 Why, oh, why did I wander near a window?
The plantation offers very little in the way of answers, but a whole lot in the way of infected, gore-hungry former residents.  The team's Goofy Guy is killed - wearing a dress, no less - and the team fights their way out, finally heading for the chemical plant.  Once there, they discover that the chemical was meant to be used as Third World population control, but it got out of hand.  Cameraman, Almost-Hunky Guy, and Crazy Guy are all killed before Reporter Girl and Hunky Guy meet their grisly fate in the bowels of the plant.  The epilogue shows a young couple on the toothy end of some zombies in a metropolitan city.  Dun-dun-DUUUN!

Wow, what a journey. 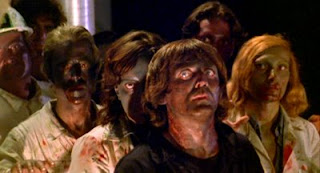 The expression that says, "Dude, I told you."
Let's see:  the acting is fairly average to over-the-top, thanks to the Crazy Guy.  The dubbing is tremendously awful, and the movie is such a scattershot affair that your brain will stop trying to figure it out after about ten minutes.  Possibly sooner than that.  There are plenty of chuckles and winces whenever you see the gore, and there is a lot of it.  Lacking the gritty realism of Tom Savini's special effects work, it appears as though they effects team had a ton of raw meat and, by the power of Greyskull, they were going to use it.  The ending gore is so blatantly insane, it's laughable yet memorable.  Tongue!  Eyes!  Everything!

I also love the lack of basic reasoning that takes place in the film.  Once the team figures out that to stop the creatures, they must be shot in the head, they continue to waste ammo by spraying them in every area below the head.  "They just won't stop!"

Hell of the Living Dead is just not a good movie.  And yet, somehow I've seen it four or five times.  It's like I forget how painful it is, rent it, and say to myself, "oh, yeah, now I remember."  A cult film?  One could argue that it is.  There are plenty of people who do like it.  I'm nostalgic about how I first saw it - that lazy, sunny summer day back in '84 - but beyond that, I don't think I could ever own it, ever see it being the beloved center of attention like Troll 2.

If you don't mind a meandering film with plot holes the size of Florida sinkholes that's worthy of a Mystery Science Theater 3000 or RiffTrax treatment, this is your film.  Don't take it seriously, and you may be able to have some fun with it.  It will never go down as a serious classic of the genre, yet it somehow gets noticed.  In a roundabout way, it did that one thing - getting noticed - right.

Until next time, dear readers, beware of chemical leaks. They might cause bad movies.
Posted by Dod at 7:38 PM