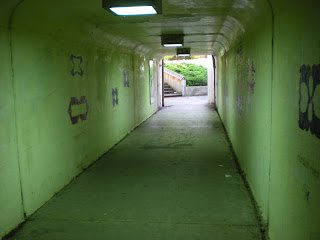 Took this picture back in Traverse City, Michigan.  I did not disappear when I walked through it.  That time, anyway.
Not those nice, spacious traffic tunnels that are so safe...oh, wait.  There was that scene in 28 Days Later. Hm.  Well, anyway, the claustrophobic elements of the pedestrian tunnels make them a tad more unnerving.  Add to that a history of Lovecraft-esque colonies of creatures lurking in the walls of the tunnel - and reality - and you have a combination that will make you not want to enter one, day or night, muggers be damned.  This is the scenario presented by writer/director Mike Flanagan in his small but moody film, Absentia.

The winner of a number of film festival awards in 2011, Absentia operates on a small budget with an enormous amount of spirit and atmosphere.  Special effects are minimal, and yet that minimalism only adds to the bigger picture.  I invoked the name Lovecraft earlier.  H. P. Lovecraft penned chilling stories where the ghastly, mind-destroying creatures on the edges of reality weren't revealed in full.  It was the idea of their existence that was terrifying.  We never see a full-on shot of what lies underneath reality in Absentia, but your imagination can fill it in. 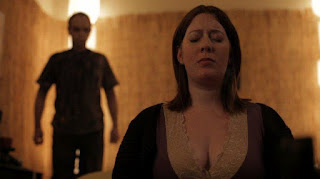 Tricia (Courtney Bell) is at a crossroads.  She has moved on in her life after the disappearance of her husband, dating a police detective (Dave Levine) and carrying his child.  Yet she still posts notices right up until she finally decides to have her missing hubby declared "dead in absentia."  Her sister, Callie (Katie Parker), a struggling drug addict and free spirit, arrives to provide moral support.  Tricia begins seeing disturbing apparitions of the missing Daniel (Morgan Peter Brown) while Callie finds herself trying to help an apparently homeless and very frightened man (Doug Jones) in a pedestrian tunnel near Tricia's house.  Things get weirder, especially when Daniel shows up, looking tortured and nearly catatonic.  Where he's been is a mystery, and that unravels as the movie builds towards its inevitable, sad conclusion which I won't spoil here. 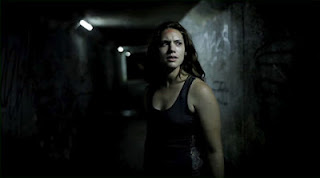 You're only given a glimpse of what Daniel has been through, and like a Lovecraft story, the idea of it is scarier than actually seeing it.  Besides the creepiness of the atmosphere surrounding that ominous tunnel, what struck me most was the stellar acting by the two leads, Bell and Parker.  Their scenes together are seamless - you really believe they're sisters.  Individually, their performances are natural and utterly believable.  While Levine, Brown, and the always-a-standout Jones turn in fine performances, it's the team of Bell and Parker that really draw the viewer in.  They don't seem like actors playing a part - they seem real.

Absentia is a small film but is making big waves.  If you want some low-key creepiness chilling you as you ponder what moves beyond the veil of the barely-hanging-on reality around us...yeah, you'll want to avoid pedestrian tunnels after you watch it.