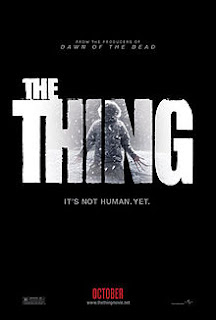 I'm just glad it wasn't a remake...of a retelling.

As horror classics go, it would be considered sacrilege to remake John Carptener's The Thing from 1982, which in itself, was a retelling of The Thing From Outer Space from 1951 which was film version of John W. Campbell's 1938 story "Who Goes There?"  Yeah, it's got a long pedigree, but Carpenter's version is considered hands-off.  But when a prequel was rumored, then confirmed, to be in the works, I have to say I was intrigued.  As anyone who has seen Carpenter's film knows, there's a whole story to be told about the Norwegian guy trying to kill an "innocent" dog and the Norwegian outpost that the characters visit in the early parts of the movie.

In Carpenter's 1982 classic, a frantic man shouting in Norwegian pursues a dog into the American camp and is killed as he begins firing his rifle wildly.  Later in the movie, the Americans, led by Kurt Russell's McReady, discover the leftovers of carnage at the Norwegian outpost.  2011's version aims to tell the story of what led up to the opening moments of the 1982 movie.  Got it?

Written by Eric Heisserer (based on Campbell's story) and directed by Matthijs van Heijningen Jr., The Thing finds paleontologist Kate (Mary Elizabeth Winstead) being drafted for her expertise as something has been discovered - quite by accident - in the Antartican snowfields:  a bona fide spaceship.  Not only that, one of its occupants has been found nearby, encased in ice.  They bring the extraterrestrial popsicle back to camp where it eventually thaws and that's when the fun starts. 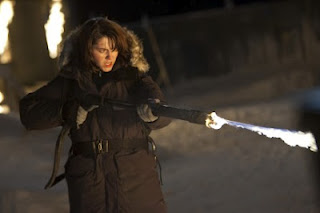 This creature doesn't just rampage through the camp, cutting down humans left and right.  Well, it does do that, but this is a crafty little bugger.  It gets into a person, assimilating them cell by cell, until you can't tell the human from the alien.  Or can you?  There is a way, and right when I thought they might completely copy how it was done in the 1982 film, they go in a different, actually quite interesting direction.  Paranoia still reigns as poor Kate is numbered among the dwindling survivors.

The creature has plans of its own, heading back to the spaceship from whence it came.  Its intentions aren't quite clear, but anyone can guess what could happen if this little cell-changing puppy gets out into the world.  It wouldn't be a street party, I can tell you that much.  There's a showdown on the ship as it nearly takes off, explaining how it's just below the surface when the American team finds it later.  There's a sigh of relief as it all over.  Ahhh.  Oh, wait, this isn't an uplifting type of movie.  Kate and Carter (Joel Edgerton) still have a few issues to work out. 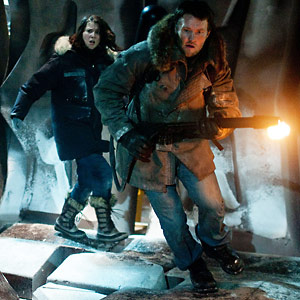 It isn't really a spoiler to say that the film ends by blending nearly seamlessly with the beginning of Carpenter's movie.  One could watch this film, then pop in 1982's classic and the story just keeps on going.  Although I expected much less from this movie, I was pleasantly surprised to find that I didn't dislike it.  It's not the same nail-biter as the other, and the aura of paranoia isn't quite as palpable.  However, as a setup to Carpenter's movie, it's enjoyable and quite respectful to its source material.

Events that happen in this movie show up in the one we all know and love.  The ice block...an axe in the door...the guy with the slashed throat...the specimens in the snow.  It's all there, and this is the story that explains how it all came to be.  A lot of it is very much the same as the other film, but one could argue that the choices of actions that a group could resort to would be limited.  If it was a standalone movie, I'd be much more lukewarm about it.  As a companion piece, it's not all that bad.  It provides some subtle answers to long-asked questions about the 1982 version, and still leaves things open for interpretation.

And now if you'll excuse me, it's time to pop in that 1982 movie I keep telling you about.  In the meantime, here, watch the trailer for this one...