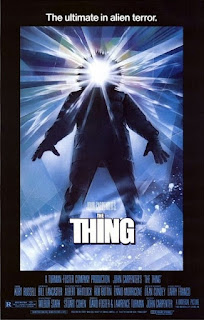 And here's yet another in my unofficial "Why Haven't I Reviewed This Yet?" series.

I mean, seriously:  John Carpenter is one of my favorite directors of all time, and probably my favorite director during the 80's along with Steven Spielberg and Richard Donner.  I've already reviewed Prince of Darkness and In The Mouth of Madness here, as well as Big Trouble In Little China as a guest on another blog.  It should be a foregone conclusion that I'd review Carpenter's first entry in his "Apocalypse Trilogy" from 1982, The Thing.  Hell, I should've reviewed this one before reviewing the not-so-bad 2011 prequel...um...The Thing.  Yeah, I know, that's a lot of linkage there.

Carpenter's The Thing was a juggernaut in the VHS era.  I can't begin to tell you how often I rented/borrowed it.  It had that "oh, man, you gotta SEE it" vibe years after it came out.  Its reputation preceded it when I first settled in to watch it in 1984 (the turnaround for movies was a little slower back then, plus I'd spent a year in Sweden as an exchange student, limiting my renting abilities).  Plate of beefy nachos in hand, I was enthralled and filled with adrenaline.  This movie was going to GROSS (according to my friends) and filled with groundbreaking practical effects by the legendary Rob Bottin (with significant input by another legend, Stan Winston), it definitely filled that quota. 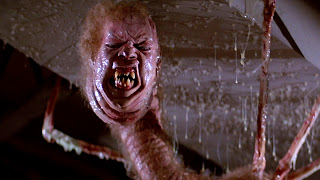 Now imagine this friendly fellow hanging from your ceiling as you fall asleep.  You're welcome.

﻿U.S. Outpost #31 is a research facility in the sunny locale of Antartica.  A lone dog, chased by a pair of frantic Norwegian men, seeks refuge and as a result of crazy desperation and a language barrier, its pursuers are killed.  You just know the dog is hiding something, and if you translate what one of the Norwegian men shouts, you get much of the plot right there.  Strange things begin happening when the the dog reveals its true nature, assimilating several dogs before apparently being stopped.  R.J. MacReady (Kurt Russell) leads an expedition to the Norwegian outpost, finding evidence that something had ravaged the researchers there.  And hey, if you watch the 2011 prequel, you get to see how it all happened. 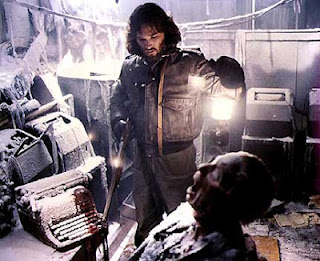 Back at the camp, Blair (Wilford Brimley) deduces that the creature can assimilate other living beings.  That's when the paranoia really kicks in.  Who can trust whom?  Things (slight pun intended) get really crazy from here on out, and if you haven't seen the film, what are you waiting for?  You've got a creature that is comprised of individual creatures in a conglomerate building possessing a modified hive mind.  It can be separate creatures, but with one purpose and drive.  MacReady and his colleagues go from guys who work together to guys who don't know who's going to assimilate them at a moment's notice.

You get to see a guy suddenly grow a mouth on his belly while trying to be revived.  You see a blood test like no other - hey, even the blood is a freakin' "Thing."  You see guys who you think are just fine change into bloodthirsty alien demons while tied to a couch.  You just don't know who is who, right down to the final frames.  One of the biggest mysteries of Carpenter's film is the ending.  Are we seeing who we think we're seeing?  The answer is given somewhat in the prequel, if you know where to look, but even that is up to interpretation.

Carpenter used a classic novella ("Who Goes There?" by John W. Campbell Jr.) and the classic 1951 sci-fi film (The Thing From Another World from directors Christian Nyby and Howard Hawks) as inspiration and stirred them up with the earmarks of a closed-room mystery to create what has become a true cult classic.  The Antarctic itself stands as the "closed room," with escape not an easy option.  Hell, it's practically impossible with the weather and terrain.  Then add to that the fact that if anyone actually leaves, he may be carrying the Thing with him.  The creature can appear as anyone, so there's your "it can be anyone" trait that the classic whodunnits and closed-room mysteries have.

Kurt Russell is a standout among intense performances, adding another to his list of great tough-guy heroes that he portrayed during the 80's like Snake Plissken and Jack Burton.  He's steady and reliable, but still paranoid enough that he isn't superhuman.  He makes mistakes just like anyone else, as Clark (Richard Masur) finds out.

The Thing is a classic, with tight direction from Carpenter and a moody soundtrack from Ennio Morricone.  It is, as my subtitle suggests, a classic from a classic - similar but different enough to stand well on its own.  If you've never seen it, take it in the way I did when I first saw it:  full of anticipation with a plate full of beef nachos.  And hey, if you can fully recreate my experience by seeing it on VHS, I tip my Phillies cap to you.