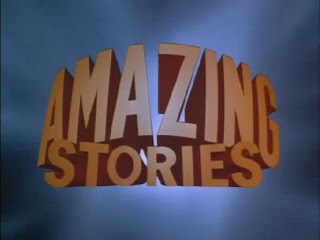 I've been around a long time. You know, like the Highlander.

I was fresh out of high school and in my first year at my first college when Steven Spielberg's Amazing Stories premiered on NBC.  It had that trademark Spielberg sense of wonder and pretty successfully related the quality of a good story to mid-80's audiences who happily fed on movies like Raiders of the Lost Ark and E.T.  It also showcased the talents of some fine directors such as Clint Eastwood, Bob Clark, Joe Dante, Martin Scorsese, and Robert Zemeckis.  My younger brother and I were faithful viewers of the series, and had particular episodes we really loved.  The one episode among many that stuck out for years in our churning minds was the hilarious misunderstanding of "Mummy Daddy," written by Earl Pomearantz and directed by William Dear (Harry and The Hendersons).

Harold (Tom Harrison) is an actor in full mummy regalia, the feature creature in a film being made in a dark Southern swamp.  His director (Bronson Pinchot) pampers him, but only because he's asked the poor actor to remain in costume, which restricts his speech and causes him to walk stiffly.  Harold suddenly gets word that his wife is in labor at a nearby hospital, so he races off to be at her side.

The thing is, he forgets he's still decked out as an undead pharaoh. 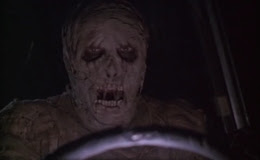 It might sound unusual for a mummy to be a part of the Southern bayou, but a local legend there tells of a traveling circus that visited the area with an evil, real un-life mummy called Ra Amin Ka.  As Harold hurtles towards the hospital, he loses his way and has a run-in with some trigger-happy locals.  Being pursued, he meets up with a kind old blind man, who brushes up against him and, horrified, mistakes him for Ra Amin Ka.  Stumbling into his back room, the old man awakens the real Ra Amin Ka, who sets out after poor Harold. 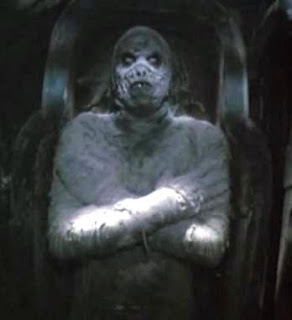 After a quick but truly classic "battle" with the real mummy, Harold is captured and nearly hanged before he finally reaches the hospital.  Reunited with his unfazed wife, Harold gives the dumbstruck rednecks the stink-eye as he dotes on his new baby.  Back on the movie set, the director is excited that Harold seems to have returned.  But we know it's Ra Amin Ka, even as they begin to remove the bandages... 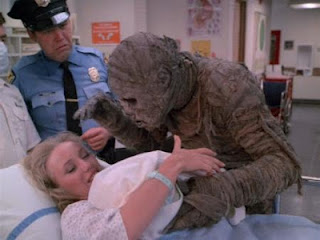 The episode has so many little moments:  Harold freezing in a ridiculous pose to avoid being seen, the rednecks' lack of reasoning skills, the wonderful near-martial-arts battle Harold has with Ra Amin Ka.   Harrison is the real star of this episode (or "chapter").  With limited facial expressions and speech, he conveys everything through mumbles and as much mobility as his makeup will allow.  He sounds exasperated, frustrated, angry, scared, and ultimately happy throughout his misadventure.  A fantastic performance by Harrison, and let's not forget the locals featuring Brion James (Blade Runner and Fifth Element), Tracey Walter (of a million different movies and TV shows), and soon-to-be Seinfeld actors Larry Hankin (the raisin-stealing actor who plays Kramer in the doomed pilot Jerry and George write) and the late Len Lesser (Uncle Leo).

It's, as they say, a rollicking good time.  Light-hearted fun based on a classic movie monster with a twist.  Amazing Stories was a staple of my heady 80's years, a little piece of Spielberg's express train of 80's movie magic on the small screen.

And it's available on Netflix instant.  So there you go.  Start watching, post-haste.  Just have some good, old-fashioned fun.
Posted by Dod at 9:02 PM