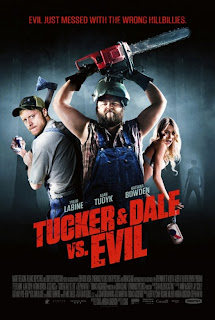 I remember reading somewhere - it may have been Stephen King's fantastic dissection of horror, "Danse Macabre" - that horror and comedy were the two most difficult genres to write.  Combining the two is like doubling the difficulty level.  Combining the two successfully takes some real skill.

Over the years, I've placed some horror-comedy hybrids very high in my pantheon of films:  Shaun of the Dead, Zombieland, and Evil Dead II:  Dead By Dawn just to name a few (all of which I haven't reviewed...yet).  Easily joining that pantheon of yuks and yucks is the 2010 film Tucker And Dale Vs. Evil.  Not since the most recent of those horror-comedies, Zombieland, have I doubled over laughing quite like I did during the adventures of lovable, misunderstood hillbillies Tucker and Dale.  Snappy dialogue, memorable characters, and an absolutely classic twist of perception and mistaken identity made this film a true party, a blast while watching and over far too soon. 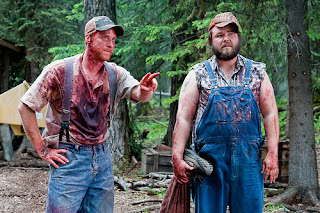 Written and directed with admirable skill and timing by Eli Craig, the film follows the titular Tucker (Alan Tudyk of the Firefly TV series) and Dale (Tyler Labine of the Reaper TV series) as they joyfully travel to their "vacation home," a rundown, deserted house that may or may not have been the home of a serial killer (animal bones and articles about murders adorn the walls).  Tucker is the obvious leader, always admonishing the good-hearted Dale for not standing up for himself and believing that he is good enough to talk to pretty college girls like Ally (Katrina Bowen).  Already spooked by their appearance, the college kids all believe Dale is certifiable when he approaches Ally to strike up a conversation (while holding a scythe, incidentally) and begins laughing nervously.  They nervously leave, led by hotheaded, asthmatic, and somewhat psychotic Chad (Jesse Moss).  The fun really starts after Chad tells a campfire story about murders that had happened in the very woods in which they're camped.  As usual in a horror film, the kids decide to go swimming in a nearby lake...a lake upon which Tucker and Dale happen to be fishing.  Ally sees them and, startled, falls into the lake, hitting her head on a rock.  Dale clumsily, but successfully, rescues her.  However, the college kids think the two buddies are kidnapping her.  Tucker doesn't exactly help things by calling out, "hey, we have your friend!" 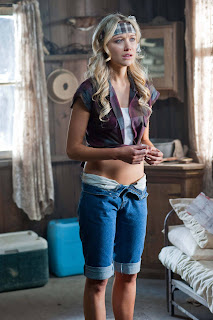 What follows is a hilarious and twist-filled love letter to all the tropes of an 80's teen horror movie.  It takes those tropes - kids in the woods, deranged hillbillies, a past history, among others - and turns them completely around.  All Tucker and Dale want to do is make sure Ally is okay and return her to her friends, but Chad is out for blood.  Why he is so gung-ho is one of the many neat surprises in the film.  But the real highlights are the side-splitting misunderstandings that almost make you question those "killer in the woods" horror films so prominent in the 80's.  For example, when Tucker saws into a log filled with bees, he panics, running away with his chainsaw swinging wildly.  What do you think that looks like?  Leatherface, anyone?  It just works so perfectly. 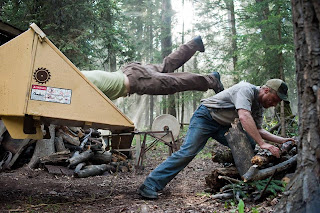 And the characters...this is one of those rare occasions in which I really hope there are sequels.  The take-charge, more pessimistic Tucker is such a great companion to lovable, low self-esteemed Dale, who only wants to fall for Ally, the smart and sweet therapist-in-training.  Chad starts as an egotistical "frat boy" (popped collar and all) who relies on his puffer and bullies his friends, but he ends as a one seriously messed-up young man.  Even the "cannon fodder," if you will, were tropes in themselves, providing some good laughs during their fatal misunderstandings. I even loved Jangers (Weezer), Dale's dog who is just like his owner:  a big, friendly lug.

Writer/director Eli Craig hit one seriously funny home run with his feature film debut.  The film just flows from one event to the next, telling one story while building one just under the surface.  It never lulls, never skimps on the body count yet never overdoes the bloody bits, and definitely never lets up in the laughs and character development department.  It was truly one of the best horror-comedies that I've seen, and a film that I hope is the start of a successful and hilarious franchise.

By all means, see this film.  If you haven't been able to tell until now:  I loved Tucker And Dale Vs. Evil.  Welcome to my list of favorite horror-comedies, you well-meaning, charming hillbillies.

Now here, enjoy the official website and the trailer to prepare you for the fun times: