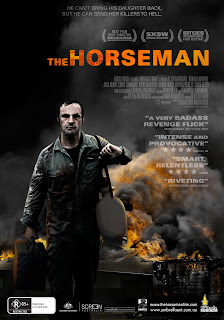 Revenge thrillers are a slippery slope.  If you're making one where the protagonist is simply killing others without much backstory or sympathetic motive, then what separates that character from the serial killers and deranged crazies that serve as antagonists?  Ah, and there's the rub.  The very question of a good revenge thriller is just that:  what separates our hero from the villains he or she is hunting?  In order to remain human or on the "side of the angels," the hero has to have something rooting him or her in reality, something that reminds them that they may be on the path to being monsters, but will never become one.  We hope.

One revenge thriller that really set the bar high was Korea's entry, I Saw The Devil, which I reviewed a couple months ago.  That was an amazing character study on both sides of the fence.  But ranking really high was another great character study in vengeance and violence from Australia, The Horseman.  A relatively quiet film - except for moments of intense screaming, crying, and yelling - it showcases the considerable acting talents of Peter Marshall as the distraught, relentless father-in-mourning as well as the fantastic directing of writer-producer-director Steven Kastrissios. 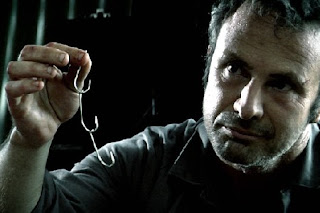 Christian (Marshall) is a father mourning the loss of his daughter from an overdose of heroin, among several other drugs.  When he discovers that she participated in a low-rent porno film and was left for dead by someone involved, he takes it upon himself to hunt down each and every person connected with the film.  Collecting his tools and hopping in his van, he takes out his vengeance on a variety of people, some who are sorry and some who are not.  Along the way, he meets a young, pregnant runaway, Alice (Caroline Marohasy) who definitely reminds him of his daughter.  Up until then, the guy was a juggernaut with a tool box, but Alice brings him back down to earth, for a short time anyway.  Christian soon discovers that not all of the men are what they seemed, or what he believed.  He also uncovers a web much darker than he ever could have imagined.  Where it looked like Christian was the force of nature, and the scummy filmmakers were the weak villains, tables turn horribly on the father and he has to reach deep down to not only exact vengeance, but survive. 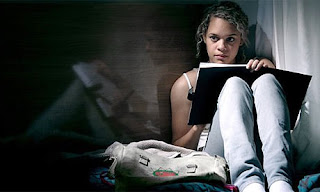 The film is impeccably-paced, with stretches of introspective calm peppered with growing swells of brutal violence.  Marshall is utterly tremendous as Christian, a man we can identify with as he tracks down those responsible for his daughter's death, despite the fact that she sought them out to make a quick buck.  He chooses to see past that, to the little girl he once protected and cared for in his own home.  His role as protector shifts to Alice, played wonderfully by Marohasy.  Marshall brings moments of intense compassion, violence, determination, and even confusion to the role of Christian.  He's tough and wants revenge, yet desires to just be a father again.  When he's weeping at the end of the film, you see what he's feeling, you see why he's crying.  All those pent-up emotions finally break the gate, and it's stunning.

Take a chance on The Horseman if you want a revenge thriller that's a cut - or crowbar smash - above others.  Fine acting, great directing, a haunting score, and the question of just how far would you go?

Until next time, enjoy the official website and this trailer: