Trying to nail down a rhythm in my blog-writing, and I think it'll come around once I'm used to my new schedule.  What I need to do is write about non-film horror subjects, like I had always intended.  Well, here are a few tidbits for this beautiful almost-fall day:

*  Speaking of writing blogs, I'd better get my rhythm together because I have decided that I will indeed write a comic book blog.  Its theme and tone will be similar to this humble blog, and I hope to delve into the mythology and symbolism of certain stories as well.

*  I also think I may try expanding into more genre films on this blog as well, such as martial arts films, grindhouse goodies, and whatever I think would be a good fit. 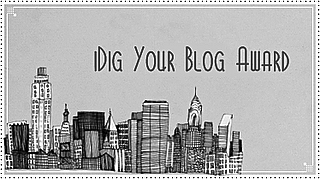 *  Recently, I received a very nice award from Pixie over at Pixie's Horror Galore, the "I Dig Your Blog Award."  It's always nice to be given a little recognition, and so I thank Miss Pixie for this and will place it over in my sidebar.  Now, the award comes with some criteria, but I'm going to go against the grain and modify some of them just a tad.  The first three criteria, I'll keep the same, which were to gratefully accept the award (which I did above), link to the the person who gave it me (which I also did above), and jot down three interesting facts about yourself (which I'll get to in a minute).  I'm going to add a few nice words about Pixie and her blog, and modify the original bestowing of awards on other blogs.

First, let me say that Pixie is a fresh new voice in the horror blogosphere.  Her enthusiasm and love for the horror genre cannot be measured, and that energy comes through in her written voice.  She's very funny and very nice as she engages all of her readers in conversation.  So thank you, Pixie, and keep up the good work!

Three mildly interesting things about me:
Now, as far as giving out awards, it's a slippery slope.  I know there are some that don't care for getting awards, especially those that require you to do something, like continue to pass it on.  I know there are some that absolutely love it.  So here's what I'll do:  see that list of blogs over there on the right?  Scroll down, you'll see all of them.  I list them here for a reason.  They're worthy of any award that finds its way to them and therefore if you have a blog listed there, consider yourself a recipient of this award.  I may also let you know in an e-mail or something at some point, and you can decide what to do with it.  If you do post it on your blog, consider it coming from me.  If you don't want to do anything with it, hey, that's why I'm doing it this way.

That being said, if you're reading this, have a really good blog, and think I should include it on my sidebar, then get a hold of me and show it off!

As for me, I'm going to put it on my sidebar and once again, thank Pixie for the award.

*  OK, what else is there today?  The weather here is getting cooler and crisper, and that means my favorite time of year is not far behind.  It's almost October, which will bring Halloween and of course, Chiller Theatre in Parsippany, New Jersey.  I am planning on being there, but won't be set in stone until I actually buy the tickets in advance.  Hopefully, my plans won't change!

Until next time, fellow zombie apocalypse survivors, enjoy the approaching autumn!
Posted by Dod at 12:58 PM