Well, it has been a while, hasn't it?
Last time I checked in with a blog, I was in the middle of a vacation.  Since then, I've been rather busy, but have been rewarded with a new career after a very long search.  There was also the matter of that pesky Hurricane Irene.  I hope you dear readers who had to put up with that storm came through unscathed.  Real-life terror is far more frightening than what we see played out in fiction.
Let's move on with this edition of In The Helicopter...
*  In taking an unintentional break from horror, I'm thinking of including more genre films under the banner of this blog.  Hey, it's my baby, I can basically write about what I want, but horror will always be the core genre featured here.  We'll see how that goes, but I'll still stick with the easy-going, drama-free, and friendly tone I've always maintained.
*  Speaking of blogs, I've been tossing around the idea of starting a blog about another strong interest of mine, comic books.  I've been reading them since 1974 and while I realize there are a million comic blogs out there, I'd just want to write a few words about the medium in the same tone as this horror blog.  None of the poison, none of the bitter dismissal of The Simpsons' Comic Book Guy, just a guy who grew up loving the art form writing about it.  Again, we'll see what I do with that. 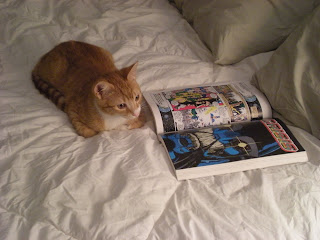 The Anti-Monitor?  Do not want.
*  Earlier this evening, I went to see Apollo 18, directed by Gonzago Lopez-Gallego for his first English-language film and produced by Timur Bekmambetov (director of Wanted and Night Watch).  While presented as "found footage," I did recognize one of the actors as Lloyd Owen, who played chaste James in three episodes of one of my favorite British comedies, Coupling.  The film's pace didn't gel well with me, but the performances of the three leads as well as the bleak, claustrophobic feel made it a pretty good movie.  I felt it should have been a different kind of movie, maybe more terrifying - and it could have been done - but it wasn't all that bad in my opinion.  It also made me think of the mixing of horror and science-fiction, and why we don't see more of that out there. 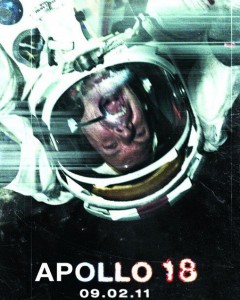 *  I'm also thinking of writing some "horror primers."  The approach:  what if someone who has never seen horror films asks me "give me five good movies to watch and tell me why I should watch them"?  Taking it a step further, what if they want to know five good movies I'd recommend in any given subgenre, like zombie movies or ghost movies?  What I'd like to do is write short paragraphs about each film and why I think they're important to the genre.  Maybe, if I'm lucky enough, I could have some of my horror blog buddies write about what they would recommend for their primer.  Stay tuned.  It might be fun to write.
Well, that's all for now, dear readers.  Back to regular programming for the next blog, and until then, take care of yourselves and make sure your door is barricaded.
Posted by Dod at 1:24 AM