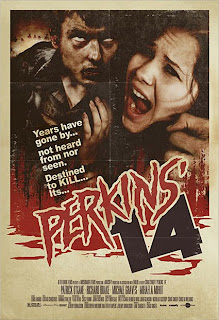 Sometimes you just get a movie that...I don't know...doesn't click. You think it should. It's got the potential. It's got several of the pieces required for it to click, but it just doesn't. Perkins' 14 was one of those films for me.

Knowing me and my love for infection horror and apocalyptic survival fiction, you'd think this movie would fall right into my embrace. It's sort of about infection and there's sort of an apocalyptic atmosphere about it. But I wasn't left with warm fuzzies.

It has a unique genesis as being a film whose parts - script and cast - were put up for public approval far before shooting began. Making a film that asks for the input of the horror movie isn't exactly a bad idea, but it runs the risk of becoming said bad idea. Still, the plot synopsis was enough for me to give it a go. While I don't regret it, it's possible I may just forget it. 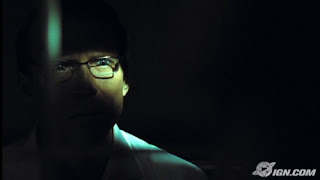 So you've got this guy, Perkins (Richard Brake). Turns out he kidnapped 14 kids from the Stone Cove area some years ago, and all of these children are presumed dead. Our protagonist, Deputy Dwayne Hopper (Patrick O'Kane), is the father of one of those kidnapped children, something that still haunts him to the present day. Haunts him so much, it makes him intense. I mean, really intense. He takes a shift at the station house while his emo daughter Daisy (Shayla Beesley) plans to head to a party and his pseudo-emo wife Janine (Mihaela Mihut) prepares for her book club. Another normal night at the Hoppers. 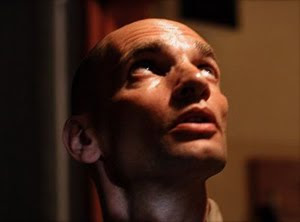 While at the station, Deputy Hopper starts having suspicions about the pharmacist arrested earlier in the evening, this being Perkins, of course. Through some slick detective work and intense interrogation, Hopper concludes that Perkins is indeed the man who took his son. Perkins doesn't help his own case by being the Chesire Cat of horror films and taunting Hopper just a little. Hopper convinces one of his buddies to check out Perkins' home, and Perkins' facade drops. He warns Hopper, but the deputy just won't listen. Hopper's pal inadvertently opens the cages in Perkins' basement, where he's kept the kids for the last several years.

Now worried about his fellow deputy, Hopper frees Perkins and they head for the house. There, Hopper finds his friend, dead and bloody. Also in the basement, all the evidence needed on Perkins, including the possibility that his own son, Kyle, may still be alive. Perkins not only admits to the kidnapping, but explains his motive. When he was a child, his parents were brutally murdered. The police never solved the crime, and Perkins took it as they just didn't care. When Hopper and the other families called off the searches for their own children, Perkins called that his revenge, that he wanted them to feel what it was like to abandon all hope. He's brainwashed and drugged the children, and now they're loose. His taunting gets to be too much for Hopper, and he shoots Perkins in the head, thereby killing the best character in the movie.

I really wanted Perkins to stay around. Is that wrong?

In town, the 14 kids Perkins kidnapped - yes, Perkins' 14 - are on the attack. They're slaughtering townsfolk left and right. One shows up where Daisy and her friends are partying, killing all but Daisy and her rocker boyfriend, Eric (Michale Graves, formerly of The Misfits). Poppa Hopper shows up just in time, but they find the boy who attacked them quite unkillable. Off they go to find Mrs. Hopper. Only she's not in a book club, according to Daisy. She's at some no-tell motel with an illicit lover.

At the motel, Janine and said lover are attacked by a wild young girl, who literally - and quite impressively - beats the lover's face into ground chuck. Janine locks herself in a bathroom until she's rescued by the rest of the Hopper family and Eric. They take refuge in the police station, where the final siege takes place. Another of Deputy Hopper's co-workers bites it, proving that Dwayne Hopper is a life-size bad luck charm to other law enforcement officers in this movie. The one remaining prisoner in the cells, a hippie protester with a bad attitude named Felicity, also shuffles off this mortal coil after a bad run-in with an air duct. 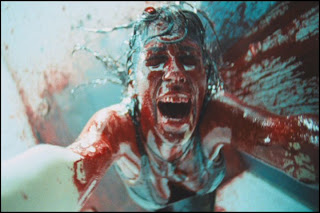 "Why do you hate my hands?"


The Hoppers formulate a plan to leave, but not only does Janine volunteer to crawl through the air ducts to the evidence room to snag a set of keys to Perkins' car, but Dwayne wants to try to get through to Kyle. The years of conditioning and constant injections of PCP are putting that latter plan into a precarious area. Janine gets the keys, but also a faceful of hopped-up psycho kids. Dwayne locks Daisy in a cell, arms her with a shotgun, and sets off to rehabilitate Kyle. 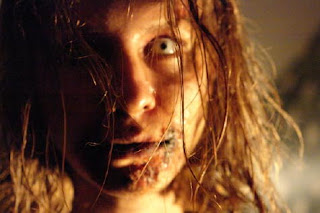 I dare you to kiss her.

All the pieces were there for me to love this movie. Sadly, it didn't click. I'm sure Patrick O'Kane is a fine actor, but he was so intense that I had a hard time buying that he was a loving father in those flashbacks with a younger Kyle. It was as if he had two speeds: intense and about to snap any minute. The other actors weren't bad, but none of them had the presence of Richard Brake, our man Perkins. Brake's been around, too. He's been on TV shows like NCIS and Cold Case. He was in Outpost (on my Netflix list) as well as Doom and Batman Begins, where he plays the very pivotal character of Joe Chill. Hell, he's even in Muse's video for "Knights of Cydonia," which makes my personal zombie movie soundtrack list (cheap blog plug).

In Perkins' 14, he delivers his lines with relish and perfect timing. When he gets half his cerebrum blown out, I thought, "well, there goes the movie." Not entirely, but I half-hoped he'd show up later on.

Like I said, this movie didn't click for me. It might for others, I don't know. I almost would've liked to see a hint that Perkins had stumbled onto creating the first strain of zombie virus, but other than the rampant cannibalism by the 14 kids, there wasn't any indication of it spreading through infection. This movie did have a real "indie spirit," but that's not always enough to carry it in my eyes. Valiant effort, but in my opinion, it simply fell short.

So, fellow survivors, make sure your kids are within your sight at all times. Who knows if we have a nutball Perkins in our midst?

Until next time, stay safe and un-undead.