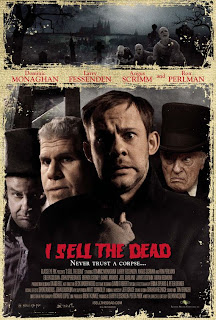 A lot of the movies I love have a unique energy about them. Shaun of the Dead is easily one of my favorites. Braindead or Dead Alive, whichever title you prefer, is another. Movies like those bristle with a kind of unbridled glee that makes every action, every camera angle crackle with that same energy. It makes the movie-viewing experience so much more fun. You see the carnival ride and you know it's going to make you smile, and if it's done right, you do.

I Sell The Dead is one of those great carnival rides. I saw the preview some weeks ago, and immediately put it in the Netflix queue. It's written and directed with great flair by Glenn McQuade and it looks absolutely gorgeous. As for star power, feast your eyes on this little list: Dominic Monaghan, Ron Perlman, and Angus Scrimm. That's right. Angus Freakin' Scrimm. That right there was enough to sell me on it on top of Charlie Pace and Hellboy. 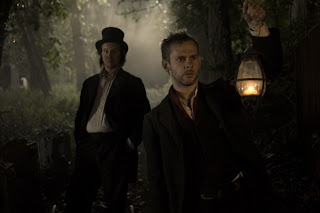 The movie begins with the beheading of a grimy fellow named Willy Grimes (the vastly underrated Larry Fessenden). He's defiant right down to the end as the blade makes a nice clean cut. After the titles, we meet young Arthur Blake (Monghan), locked away in a cell and visited by a record-taking friar, Father Duffy (Perlman). Duffy wants the whole story of the murders of which Willy and Arthur are presumed guilty. Arthur then tells the tale of how he and Willy met while grave robbing for the mean old Dr. Quint (Scrimm). 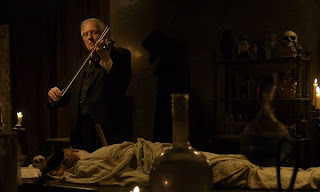 Willy takes Arthur under his wing and helps the young boy develop into a grown ghoul. They hate working for Quint, who constantly threatens them and barely pays them at all. One grave robbing turns up an undead creature who attacks them when a stake is removed from its heart. The boys finally see a way out by delivering the creature to Quint, who removes the stake at his own peril. At last, Willy and Arthur are in business for themselves, taking on the undead jobs no one else will take. No one, that is, except the evil House of Murphy, a rival gang of ghouls. 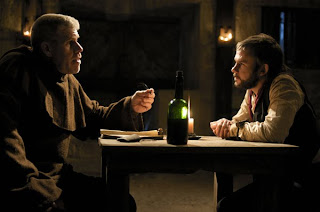 The House of Murphy tries to recruit Arthur at one point after a botched grave robbing (watching how it's botched is a great WTF moment), but he refuses. Before long, the guys take on an apprentice, Fanny Bryers (Brenda Cooney), who shares a bed with Arthur. Can you say "Yoko"? Yep, Arthur's smitten, but Willy's not too fond of her. She's anxious to prove herself, and an opportunity arises when a delivery of undead washes up on the shore of a nearby island. Fanny insists they race the House of Murphy to retrieve the creatures. Willy's not happy about it, but he goes along. 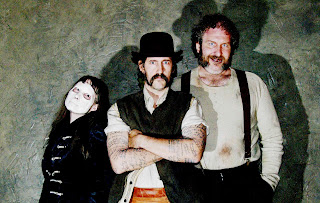 The House of Murphy

When they arrive, all hell breaks loose. Turns out the undead are pretty spry, almost lizard-like. The House of Murphy gets the best of our heroes, but it's not for long. The House of Murphy ends up dead, which is the whole reason Willy and Arthur have been sentenced to death. To say that the movie winds up here is a gross understatement. There are a couple more twists to witness, one a good surprise and the other a funnier one. 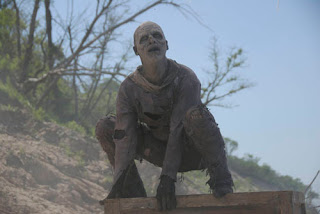 The more I thought about this movie after I watched it, the more I liked it. It's got an old-school spirit mixed with a modern filmmaking sensibility. Monaghan and Fessenden are outstanding and have undeniable chemistry as two very different friends who just should never be apart. The movie looks amazing, a perfect mesh of colors and lighting. Some things that happen in the script are so out there, scenes that have you chuckling and shrugging your shoulders. But really, that's the fun of it. It's got unbridled charm and energy, with a knowing nod and wink to the ghoulish films of yesteryear. A love letter to the Saturday afternoon classic horror matinees, it's one you'll want to read over and over.

And in the spirit of the type of movie I Sell The Dead pays homage to, check out these great posters: 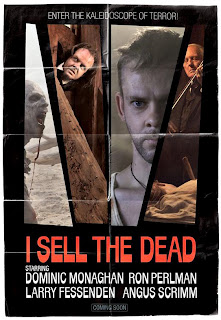 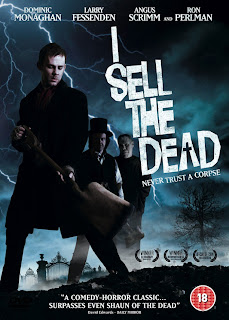 So, enjoy, fellow survivors. This one will soon be gracing my DVD shelf.

Now with our undead moaning at the gates, let's not try what we see in this movie at home. Let shuffling undead...shuffle. Take care, you all, and we'll see you next time...