Lucio Fulci's The Beyond (1981) This Movie Just Hates Eyes 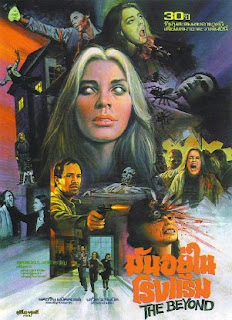 In honor of the city of New Orleans and their NFL championship team The Saints, I bring you this tale of gory wackiness from famed Italian director Lucio Fulci. Actually, it was just a coincidence since I had watched this the Saturday before the Super Bowl and would have reviewed it anyway.

You've got to love Lucio Fulci. The late director is still considered one of the forerunners of gory filmmaking and he never shied away from thrusting bloody images into your eye-space. Speaking of eyes, everyone, no matter how tough, is vulnerable in the organs through which we see. They're squishy, usually moist, and absolutely vital to the senses. A gore master is always going to go straight for the eyes, and Fulci doesn't disappoint in The Beyond. In fact, seriously, this movie hates eyes.

The movie's prologue starts in 1927 as a lynch mob closes in on Schweik, an artist accused of being a warlock. They smack him up with chains, crucify him against a wall with spikes, and douse him with limestone acid. A young lady elsewhere in the hotel reads from The Book of Eibon, then bursts into flame. Seems it might be possible this hotel was built on one of the seven gates of Hell. Forboding...you know things might not end well, and Fulci will make sure you know the hell out of that fact.

Jump ahead to 1981, and we're introduced to Liza, a young lady who has inherited the hotel, and Martin, her architect friend. It doesn't take long for strange things to start happening. One of the handymen sees a white-eyed figure through a window and falls off a scaffold. Joe the Plumber (no, not that one) arrives, meets creepy caretaker Martha, and sets about his work. Doesn't take long before something emerges from the wall, grabbing Joe by the face and squeezing his eyes out. I mean, literally squeezing his eyes out. Later, Martha finds the poor guy along with what turns out the be the corpse of Schweik.

Meanwhile, Liza meets an unusual woman named Emily, who seems to be the woman who burst into flames in the prologue. Emily sports mysterious cataracts in her eyes and depends on a sweet German shepherd to get around. She seems to know Liza and after taking her back to her New Orleans home, tells her to get out while she can.

Cut to the hospital and Dr. John McCabe, who treated the handyman earlier, is performing the autopsy on poor old Joe. After he and his excitable assistant Harris leave, a machine in the morgue picks up possible signs of life coming from Schweik's corpse. Right about this time, Joe's wife and daughter, Jill, show up to see Joe's body. Mrs. the Plumber goes inside, leaving skittish Jill in the hallway. While tending to her husband's body, Mrs. Joe is spooked by something off-screen and somehow ends up under a gentle drip of powerful acid, which eats away her face in unwavering, bloody detail. It's like Fulci grabbed the back of our collective heads and said, "look at it, damn you, look at it! her head is melting!" Jill investigates but is reasonably freaked out by the sight of not only her dead mutilated father, but her dead acid-soaked mother and the advancing puddle of blood and goo. She tries to get away, only to run into a room full of dead bodies. Well, it is a morgue, after all.

When the funeral for Joe and Mrs. Joe occurs a few scenes later, we are privy to the fact that Jill now has those milky eyes. Eyes! See?

Emily tries to tell the story of Schweik to Liza, but the self-professed city girl doesn't buy it. Emily runs out after finding out that touching a Schweik painting causes hand bleeding. Despite the warnings, Liza goes to room 36 anyway just to see if Emily was telling the truth. Liza finds her opinion shifting when she not only finds the Book of Eidon, but sees a vision of the crucified artist hanging on the wall. She runs out into the arms of our rugged Dr. John, who helps her investigate. Sure, the spikes are still in the wall, but no body. Oh, and the book is gone.

Later, in New Orleans, Liza and Martin walk the streets, discussing how to renovate the hotel. Liza spies the Book of Eidon in an antique book store and rushes in to snag it, only to find it's somehow changed in those few seconds into another book. According to the creepy, giggling store owner, it was always the book she picked up and not what she thought.

Meanwhile, Martin arrives at City Hall to inspect the records of the hotel. He uncovers the secret of the hotel, but a lightning flash startles him off the ladder and he crashes to the floor. Now, I know some of you get the heebie-jeebies from certain things, and Fulci introduces one common cause right here: an army of tarantulas. They converge on Martin...well, more like on his face...biting everywhere, even that little bit of skin that separates the nostrils. Face-eating spiders. Don't blame me for the nightmares.

Catching up with Dr. John, we find that he intends to confront Emily so he goes to her house, which as it happens is abandoned, and has been for a while. On the upside, he does find the Book of Eidon.

Back at the hotel, Martha tries to clean a tub in room 36, but finds that somehow, Joe's body is there. It rises and attacks her, shoving her head against one of the spikes in the wall. What part of the face do you think is the spike's exit wound? That's correct: the friggin' EYE!

What's happened to Emily? Well, she's visited by the corpses of everyone killed so far but she's not willing to meet her fate with any kind of resignation. She's been under Schweik's employ the whole time, but isn't quite ready to die again apparently. Commanding her dog to attack, she cowers until it's silent and the dog returns to her...now one of the undead. The faithful canine rips her throat out in glorious Italian horror film color.

Liza tries to investigate the hotel basement, but is attacked by the corpse of the other handyman, Arthur. She runs into Dr. John again, who tells her that Emily was probably a figment of her imagination. Liza starts to doubt her own sanity, but the pair go into the basement to check it out again anyway.

I've said it before: never actually say anything about being in one of the seven gates of Hell while standing ass-deep in it. The hotel bugs out while the two escape, and if the shadows drifting by the windows are any indication, Hell is puking up the undead at an alarming rate.

To the hospital they go, only to find the dead have risen and are everywhere. In the ensuing melee, they get separated. Dr. John runs into good ol' Harris, who's alive and afraid. Liza finds Jill cowering in the morgue, but doesn't see her creepy, milky eyes. They rejoin and attempt an escape, but an exploding glass door sends shards of glass into Harris' face, killing him. Well, back to the morgue for the other three. From one flying pan into another frying pan.

Cornered in the morgue, a door opens and Schweik finally RSVP's his own party. Jill suddenly shows her true undead colors and attacks Liza, but Dr. John manages to ventilate the zombie girl's brainpan with a well-placed shot.


Nowhere else to go, Dr. John and Liza enter the door Schweik arrived through and find themselves suddenly back in the hotel basement. They shimmy through a portal and are transported to a desolate, corpse-filled world. Hell? Purgatory? Safe haven while the real world is decimated? Fulci leaves that your imagination. Dr. John and Liza could only stare while their eyes turn a milky white as the movie ends. 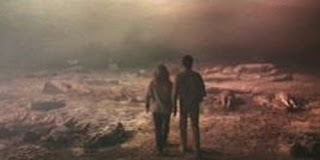 The gore is unflinching. When Fulci dares you to look at something, he doesn't give you a chance to hide your eyes. And yes, hide your EYES! Like I said, this movie hates eyes. It's a creepy movie, to be sure. A couple flinch moments aside, it isn't really jump-start scary, but that's okay. The atmosphere is quite enough to satisfy. And you know, I laughed quite a bit, but not at it being silly or stupid. See the simile above: what a party. I could see this movie being a comfort horror film for someone in my horror fan family.

Oh, and I'd be remiss if I didn't mention the outstanding, atmospheric soundtrack by Fabio Frizzi: creepy, delicate, choral, and forboding all at once. Perfect compliment for what was shown on the screen.

Have some fun with this one. Watch it late at night, or with another Fulci feature like you're in your own personal grindhouse cinema. If you take it too seriously, you'll miss the fun. Just kick back and enjoy the sickness.

Speaking of sickness, the undead outside my own walls are getting loud, so I'm going to turn up some music and get ready to turn in. Remember to think of happy places when you hear the groaning. It's been known to drive the steadiest person batty.