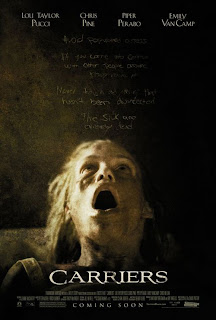 Oh, just the perfect movie to watch when you have a sore throat. A cough comes along and you think, "aw, hell..."

Carriers is a fine little film that sported one of 2009's breakout stars in Chris Pine (the new Captain Kirk in Star Trek) and a familiar face that makes me sigh, Piper Perabo (witness my sighs in my review of The Cave), and it's directed by brothers Alex and David Pastor. Most people who know me know that I - for some macabre reason - loves me my infection horror. The antagonist is usually an unseen enemy - microbe or virus - that turns regular folk into antagonists themselves. That's what lies at the heart of Carriers: the notion that paranoia and mistrust elevate to insane levels when the instinct for survival meets a superflu epidemic.

When the film begins, the country, and possibly the world, is deep in the throes of some kind of virulent superflu. We're introduced to four college-age kids tooling along the back roads of the near-southwest: brash Brian (Pine), his girlfriend Bobby (Perabo), Brian's brother Danny (Lou Taylor Pucci), and Danny's friend Kate (Emily Van Camp of "Brothers And Sisters"). They're on their way to Turtle Beach on the west coast, specifically a place where Brian and Danny spent their summers. As evident in the choppy home movie clips that start the film, it's place that holds a special place in their hearts. There, they plan to wait out the epidemic.

The back roads are smooth until they come across a desperate father, Frank (Christopher Meloni) and his sick daughter Jodie (Kiernan Shipka, who plays Sally Draper on "Mad Men"). Frank just wants some gas to get his daughter to a school in a nearby town where it's rumored a cure has been found. Brian doesn't trust him, citing his "survival rules," and tries to gun it past him, only to smash up the oil pan. Hanging their surgically-masked heads in shame, the quartet is forced to march back to Frank and Jodie to ask for their help. A compromise is reached by sealing off the very back of the SUV with plastic, keeping Jodie's sickness contained.

They reach the school and discover to their horror that no cure has been found. The serum staved off the sickness for three days, but that was about it. The doctor (Mark Moses, Duck on "Mad Men") is providing euthanasia punch to the children there, saying one of the heaviest lines of dialogue in the movie: "Sometimes choosing life is just choosing a more painful death." Despite Frank's pleas, the doctor slowly goes about his grim duty.

Meanwhile, outside in the SUV, Bobby has been babysitting the weak Jodie. When Jodie begins choking, Bobby goes against the rules and opens the plastic to help her. Good motive, bad move. Jodie coughs a spatter of blood into Bobby's face and the realization is instant. The look on Bobby's face tells it all: infected. Her basic survival instinct kicking in, Bobby tries to cover it up, hiding all evidence of what just happened.

In one of the saddest scenes of the movie, I thought, a defeated Frank escorts his daughter to a bathroom, knowing full well that they will be left behind by the others. He expects it and even accepts it. He engages Jodie in a rendition of "Itsy Bitsy Spider" as the others leave them to their fate.

Trying to find a place to sleep and maybe relax, the four find a golf resort and, after a close call with a haz-mat-suited corpse in the pool, decide to have a little fun on the course. Smashing windows with long drives, it's revealed to the viewer that the resort is already spoken for, as one of the rooms is prepped for paranoid living. Could this just be the room of the corpse in the pool? Not if the radio calling for him is any indication. Outside, Bobby remains distant, but panics when Brian forces a kiss on her. 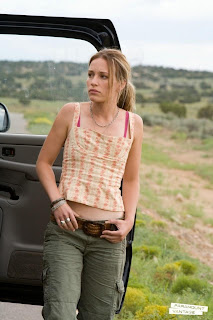 And now a picture of Piper Perabo, because I said so.
Mr. Pool Corpse's buddies return and track down the four, and there's a standoff. Tensions flare when one of the survivalists tells the girls to strip and that they're staying while they'll let the guys leave. Kind of like in 28 Days Later, this isn't looking good. Suddenly, everyone panics. Bobby, her shirt off now, shows signs of infection with rashes and bruises on her left side. The survivalists demand they all leave now, so the quartet hurries into the SUV and they're gone.

It's not a happy escape, though, as you might guess. No one wants to talk about the fart in the car, so to speak. Hell, they're even hanging their heads out the window. At an abandoned gas station, the situation is finally addressed. Danny and Kate talk about it, but Brian is the one who goes through with it, pulling Bobby from the vehicle and leaving her behind. The sight of Bobby weeping hysterically in the middle of the road as she shrinks from view is utterly heartbreaking.

The whole experience sets Brian off the deep end. He's withdrawn and morose, and really, who can blame him? But he really takes the crazy cake when he cuts off another survivor's car, practically causing an accident. Danny tries the peaceful route, pleading with them to help him "and his pregnant wife." Brian coldly shoots the driver and engages the passenger in a short gun battle, killing her after being wounded in the leg. Remember, dear readers: no hospitals.

Stopping at a boarded-up farmhouse, Danny slips inside for medical supplies and is greeted by two corpses, one of which is being dined upon by the family German shepherd. Danny is forced to kill the dog when it lunges for him, but he manages to pick up some pain pills for Brian. When he asks Brian to see the wound so he can assess the damage, the real damage is evident: Brian is infected. Rashes run up and down his legs.

Later, during a rest stop, Kate convinces Danny that they should leave the delirious and dying Brian behind. Brian isn't going down without a fight, though. He reveals he has been doing all the dirty work - starting with abandoning the sick parents Danny thought were already dead. And now, he holds the keys - literally - to Danny and Kate's escape. His sad duty finally clear, Danny shoots and kills his own brother.

Danny and Kate silently drive the rest of the way to Turtle Beach, but it's not a cheery drive full of show tunes and games of Punch Bug. The beach hotel that held so many memories and symbolized hope is now just an old motel, abandoned by the disease. You'd think maybe Danny and Kate would grow closer, but there's no indication of this. In fact, Danny muses on facing his future "truly alone," as we're treated to old home movies of he and Brian during happier times.

It's a well-acted, grim movie, the darker mirror image of the same year's comedic apocalypse film Zombieland. There's traveling and a set of rules to live by, but there aren't any laughs in Carriers. It's the dark side of what we are, animals just trying to survive. Look at the German shepherd in the movie. Probably a devoted pet at one time, but forced by hunger and desperation to feed on its own owner, lying long dead in the bed. So that begs the big question:

What would you do to survive?

Therein lies the real mystery. And the real horror.

But remember, my dear fellow survivors, there's always a party in my shelter...just don't get so drunk you wander outside the gate. You know what's out there.