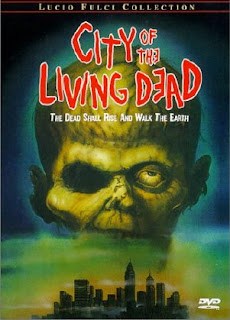 After watching The Beyond, I fell into a Lucio Fulci kind of mood, so I moved City Of The Living Dead up on the ol' Netflix queue. I expected gore, surreal imagery, and bleakness. Yes, yes, and yes. Fulci never disappoints in that. While I didn't enjoy it as much as The Beyond, it was still a trippy, blood-and-guts-filled ride. Fulci crafted dark, forboding horror films that were part David Lynch, part Herschell Gordon Lewis. The plots aren't hard to follow, no matter how non-linear he gets with them, but they are filled with images and events that cause me to say "What the what?" And sometimes, I like being a little puzzled. 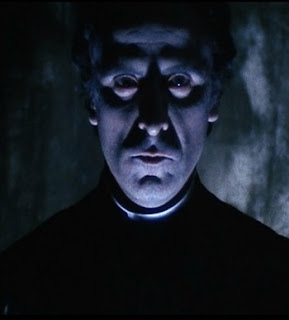 Do NOT steal from his collection plate.
The prologue sets up by introducing the wonderfully creepy (if not slightly derivative) music of Fabio Frizzi. I'm really going to have to find some of his soundtracks - I absolutely enjoy the atmospheric, John Carpenter-meets-Goblin of his music. We're privy to a seance at the beginning, where a few psychics, including Mary (Catronia MacColl), have visions of a morose priest, Father Thomas (Fabrizio Jovine) methodically hanging himself. Mary goes into screaming fits and apparently dies of fright. At the graveyard, she suddenly awakens inside the coffin and engages in the appropriate response: blood-curdling screams and frantic pounding. Lucky for her, newspaper reporter Peter (Christopher George) hears her and uses a pick axe to open up the casket.

Once she's calmed down and recovered a little, Mary explains that something horrible is happening in a small town named Dunwich. The Night of the Dead is coming on All Saint's Day, and the gates of Hell that have been opened by the priest's suicide, and that will lead to the dead rising from their graves possessing demonic powers.

And some towns just have a fair.

Back in Dunwich, the townsfolk are noticing some strange things. Bob, the local ne'er-do-well who's mostly harmless, discovers the rotting corpse of an infant in an old house, just as he was about to deflower a random blow-up doll. I'm not joking. Three local yokels are spooked by a mysteriously shattering mirror at the town watering hole. While treating his patient Sandra (Janet Agren), psychiatrist Gerry (Carlo De Mejo) witnesses Sandra's pet cat go a little bonkers and scratch her out of fear of something. Yeah, there's a bit of a stink of evil in Dunwich. That happens when you're sitting on top of a gate of Hell.

Emily, Gerry's young girlfriend and assistant, heads out to meet Bob, who she sees as a lost soul in need of some help instead of the constant persecution he gets in Dunwich. When she finds him in a rundown garage, he's spooked by some weird noises and dashes off. Emily is attacked by the late Father Thomas, who shoves a handful of wormy, maggoty dirt in her face.

Oh, but Father Thomas isn't done yet. Making out in a car is fun. Making out in a car in a town that's burping up undead priests with superpowers is just asking for trouble. Father Thomas harasses two lovers in a car first by appearing to them as his hanged self - which is brilliantly spooky on its own - then by showing off his new ill-obtained telekinetic magic powers. While he stares at the girl, she begins bleeding from the eyes and then - in the most infamous scene of the movie - literally puking up her guts. Keep in mind, Fulci didn't care if you were offended, so he's not going to turn that camera away. It's easily one of the most disgusting scenes you might see, but if you rented his movie, then you know what to expect. Father Thomas apparently then has a pressing appointment elsewhere, so he just squeezes the brains out of the back of the hapless guy's head and bounces.

Emily's body is later found, apparently dead of fright. The townspeople are quick to blame poor Bob, who's really just been running scared from place to place. Meanwhile, Mary and Peter travel to Dunwich, hoping to stop the infestation of undead before Dunwich becomes...that's right, a city of the living dead. It's getting down to the wire, though, as more strange things happen: Bob sees an apparition of Father Thomas, an undead Emily appears in her little brother's window, bodies blink in and out of rooms, a mortician is bitten by the corpse of an old lady. Well, he was trying to steal her necklace, so that one was fair.

And poor Bob. He hides in a garage but is discovered by the daughter of the family there. As he tries to explain his fears, the father rushes in and brutally attacks Bob. The handy dad then starts up a drill press and - you guessed it - runs it through Bob's head in a fit of rage. It isn't quick and clean, I'll tell you that.

Finally, Mary and Peter arrive in Dunwich, and while searching for Father Thomas' grave, they meet Dr. Gerry and Sandra. After exchanging information, they settle for a good old-fashioned team-up to remedy the pesky undead problem. They even endure a blast of maggots through a window.

That problem is getting worse, though. Emily's little brother reveals his parents have been killed. There's been a slaughter at the local bar. Sandra has her brains squeezed out of the back of her head by a now-evil undead Emily. Wow, even in death, she didn't like anyone messing around with her man.

With the undead now roaming the streets, Peter, Mary, and Gerry find Father Thomas' tomb and discover a ladder leading into deep caverns. Things are getting hairy as it's noted that All Saint's Day has begun. Time may be running short, and evil isn't known for playing fair. Sandra returns to the party, but now she's evil, too. Instead of a friendly greeting, she plays Squeeze The Brain with Peter's head before getting impaled by a distraught Gerry.

Now the last line of defense, Gerry and Mary meet the elusive Father Thomas in his hellish hideaway. Father Thomas tries the Jedi Eye Bleed Gut Puking Trick on Mary, but Gerry's not taking any more of these shenanigans, and rams an old wooden cross through the priest's midsection. The advancing undead burst into flames as Gerry and Mary escape back to the surface.

Now, the ending's a little sketchy to me. They emerge from the tomb to see the little kid, John-John, running happily towards them from the protective arms of the police. As the kid runs closer, Gerry and Mary's smiles turn to grimaces of terror. Mary screams and...that's it. There is no indication as to what may have happened. It could be said that the horror wasn't over, but we were given more of an indication that it had. Maybe something grabbed the kid, but an establishing shot would've made all the difference there.

I enjoyed The Beyond more simply because of its wackiness, and it just seemed like a movie with ...if you'll excuse the term...more life. City of the Living Dead didn't have many characters I could really feel for - instead, I saw them as somewhat likable characters waltzing their way through ultra-creepy scenes of undead brain squeezing. Still, it was pretty fun. Any scene with Father Thomas is worth the price of admission. Creepy dude, especially when he's shown hanging from random places.


To balance out the gore, here's a picture of a sorry puppy. 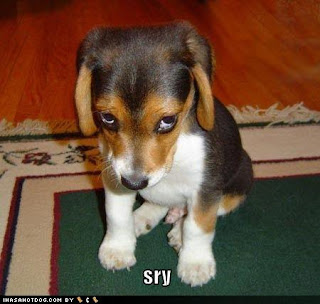 Well, until next time, fellow shelter residents, be careful out there and be thankful the living dead we deal with don't have superpowers.