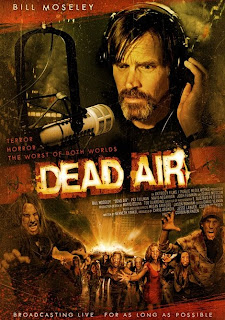 Radio has been a constant in times of chaos. There have been radio broadcasts at pivotal times in history. The crash of the Hindenburg. The War of the Worlds. FDR's "fear itself" speech. President Obama's "at war with ourselves" speech when the zombie outbreak began.

"Dead Air," starring Otis Driftwood Bill Moseley and Patricia Tallman and directed by Corbin Bernsen (yes, that Corbin Bernsen), explores the power of radio along with what happens when terrorism is the reason behind a viral/zombie-ish outbreak. 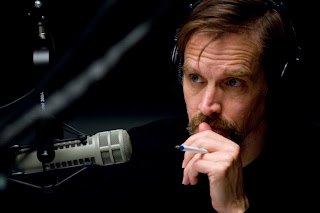 A radio host not concerned with ratings? Whaaaa?
Moseley plays Logan Burnhardt, a nighttime shock-jock for a Los Angeles radio station hugely popular for being a controversial, confrontational personality. In reality, though, he's a nice guy with a young wife and daughter who knows how to separate his on-air and off-air personality, despite its difficulty. Drama follows him no matter what, as his producer is also his ex-wife, Lucy (Tallman). Their relationship is contentious, but professional for the most part. Joining him for his shift are his co-host Gil (David Moscow) and engineer Burt (Joshua Feinman), not to mention approximately one million listeners (according to Lucy at a later point in the movie). Seems like it's going to be another night behind the microphone, but Logan's running late. He has no material, so he just wings it, coming up with a subject off the top of his head.

Paranoia. He goes with paranoia, and if you don't see the foreshadowing here, then I may have to drag out an old-school blackboard.

A few callers are crackpots that Logan insults (actually rather tamely, I thought), but one guy he goes completely off on for his beliefs that "the Muslims are responsible for all that's wrong in the world." Everyone looks nervous as Logan tears this nutter a new one, maybe two new ones, and the audience finally gets to see the bite Burnhardt has. It's a bit of a spoiler to say why he gets so riled up, but I'll just say it's very personal. This is actually a well-played bit of character background that unfolds rather nicely.

At an NBA game, we are privy to two terrorists up to some no-good shenanigans. They prepare to unleash some gas into the event, but one of the butterfingers causes it to leak early. He freaks out and the other is forced to shoot him through his pathetic noggin before stumbling out in a gas mask. No, not conspicuous at all.

It's business as usual at the station for a while until reports of rioting and strange behavior start emenating from that very same stadium. News stories show frenzied crowds and some people just acting like utter nutbars. Said nutbars branch out, seemingly multiplying. This infections is along the nasty lines: it can spread through bites and scratches. The terrorist who didn't botch his massive hate crime catches up with two others, but due to his exposure to the gas, is put down by the leader, Abir (Navid Negahban), who also happens to be his brother. The remaining two miscreants make their way to the radio station to further along their plan.

Meanwhile, Logan doesn't want to give his airwaves over to the Emergency Broadcast System, choosing instead to field calls from frightened people in the thick of the chaos. He's not enjoying it, like you would think certain other radio talk show hosts (who shall remain nameless here) would - after all, hey, ratings. Logan's got other, more important things on his mind, namely his wife and daughter. How frustrating is that? Trapped in a well-fortified building but knowing your loved ones are somewhere out there, in the path of all the bitey, infectious insanity.

The terrorists make it to the radio, and Abir ditches his last ally, telling him to kill himself before the infection spreads in him. Abir, after all, has only enough antidote for himself. Proving himself to be one gracious dude, Gil volunteers to take his motorcycle and speed over to Logan's house to help protect his family. He nearly doesn't make it out, thanks to an infected Burt (as a result of an earlier scuffle with the security guard). From his bike, Gil reports back about the desolate streets and sudden throngs of crazy bloody-eyed people. 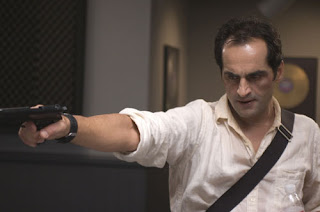 Infected terrorist, you deserve the painful diarrhea I'm sure that chemical will cause.
Abir reaches the studio and holds Logan and Lucy hostage, forcing Logan to give out false information to spread the panic and fan the flames of hate, including inflammatory comments directed at Muslims. There's a good reason why this makes Logan uncomfortable, and again, I won't spoil it for you. In a struggle, Abir's last syringes are broken, and he makes Logan retrieve some from a diabetic co-worker's desk. There's a showdown in a stairwell as the delirious Abir runs into his former cohort, now fully infected, which results in a humorous take on the bullet to the brain moment. Cue a newly-infected Susan Ruttan from L.A. Law (it is directed by Corbin Bernsen, mind you) and Abir is meat.

Scratched during a battle with that pesky security guard who shows up again, Logan takes the antidote and survives, guiding the few listeners he has left into a new day. The antidote will be taken to the proper authorities, and the terrorists will not have won, though the death toll is huge. Logan is able to go home again, and be reunited with his family. There is, as is standard with most horror films these days, a bit of a twist, but it is left open for interpretation. Depends on your mood how you might see it as ending.

Now, this movie didn't suck whatsoever, but oddly, it didn't blow me out of the sky, either. It clocked in somewhere smack dab in the middle. I like my infection movies full of blood, guts, goo, and other multi-colored liquids and masses. When there's biting and clawing, well, I don't expect the infected to hold back with a "oh, sorry, there, chief - didn't mean to poke your eye." Several times in the movie, and I can understand budget constraints and even a little "leaving to the imagination," there were moments when something terrible was about to happen to someone and then...hm, just a bit underwhelming. They did save the ripping and tearing for Abir, which is poetic justice, I suppose. And there was a funny scene when Abir shoots his former colleague in the head. Seems the infection dulls the pain receptors and causes people to be puzzled while they fish the bullets from their wounds. To rehash, the infected aren't dead, just really sick and with a hard-on for beating, biting, kicking, and bleeding from the eyeballs.

In all, I just felt like it was a good movie about how terrorism, paranoia, and the fear of chemical attack go arm in arm, but as a whole, one that fell just short of being really good. Bill Moseley is fun in just about anything, and I really feel Patricia Tallman is an underrated actress (she always gets me in the remake of "Night Of The Living Dead"). Yeah, the acting was fine. Some sequences were standouts, too. Burt's transformation in the elevator in front of a shitting-in-his pants Gil was very well done. A quick long shot of Gil speeding down an empty street, with infected nutjobs emerging from random shadows, really did it for me.

So, up here in my helicopter, I'll stick with music but hey, if Logan Burnhardt wants to go back on the air, I'll listen, but I'm afraid he's just too nice a guy to be controversial. Kind of like this movie was too nice to be really scary.

'Til next time, keep your doors and windows barricaded.